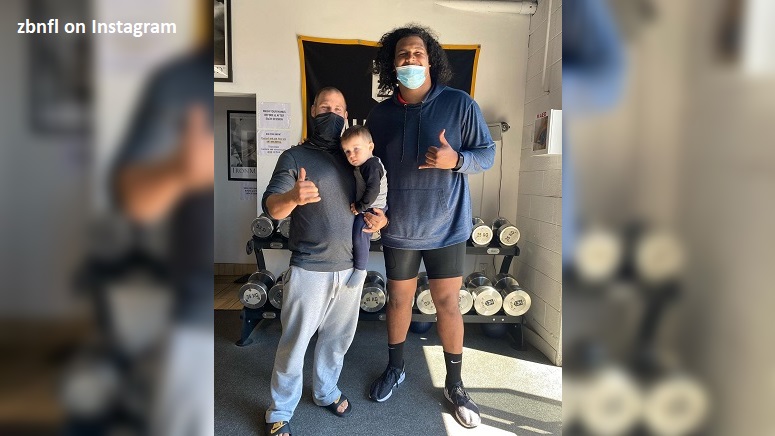 While Pittsburgh Steelers tackle Zach Banner did miss nearly all the 2020 season due to a right knee injury suffered in the team’s regular season opener against the New York Giants, the organization still rewarded the USC product with a two-year contract recently. That deal indicates that the team likely expects Banner to be one of their two starting tackles in 2021. Banner, who recently said he expects to be ready for the start of the Steelers 2021 training camp at the latest, posted a full-length picture of himself on Instagram on Monday and it shows him looking very fit and trim.

As one follower on Twitter pointed out after looking at the picture of Banner, his right leg seems to have a little atrophy and that’s probably not too surprising at this point. The rest of him looks ready to roll, however, at least from my untrained eyes.

The start of Banners NFL career included him being seemingly plagued by weight and conditioning issues. He recently discussed that during an interview on The Jim Rome Show,

“How it happened was a reflection off of my battle with my weight and stuff earlier in my career and throughout college”, he said of his beginnings in the NFL. “Obviously, I fell in the draft and I wasn’t doing the right things off the field with my body and stuff in my first year, and that offseason, I kind of spent a month and a half during free agency just waiting for the phone to ring, and just working on my body, working on my mindset”.

Banner, who was with the Indianapolis Colts, Cleveland Browns and Carolina Panthers prior to signing with the Steelers in 2018, looks totally different than he did when he was originally selected in the fourth-round out of the 2017 NFL Draft. Last season, he beat out tackle Chukwuma Okorafor for the starting right tackle job during training camp. Unfortunately for him, however, the right knee injury he suffered in the second half of the Steelers Week 1 game against the Giants ended his 2020 campaign before it really even got underway.

While the Steelers are expected to select another tackle at some point during the 2021 NFL Draft, that player, if it happens, will likely be competing to start opposite the side Banner will be chosen to play on.

The Steelers still have around 14 or 15 weeks before they will start training camp so it will be interesting to see how much more Banner can recover from his 2020 season-ending knee injury before then. He certainly does look great right now, however, and that’s great news for everyone.