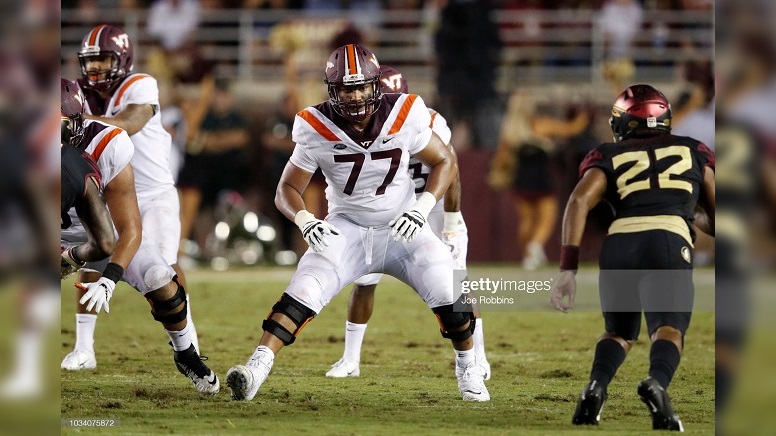 In an ideal world, PFF says the Pittsburgh Steelers would steal away Virginia Tech OT Christian Darrisaw at #24. They released their dream draft for each team on Thursday, giving Pittsburgh a little-mocked player in the first round. In their explanation, they write:

“This feels like the floor for Darrisaw, who is almost purpose-built to play on the Steelers’ line. He moves people off the line of scrimmage with such ease on tape at 6-foot-5, 322 pounds, that it’s hard not to see him being a value add in the run game early on.”

It’s worth noting this is a deep tackle class, several of them certainly going off the board before the Steelers turn the card in at #24. Penei Sewell and Rashawn Slater are the top two names in this class. There’s Alijah Vera-Tucker flying under the radar, though he may move to guard in the NFL. There’s also Oklahoma State’s Teven Jenkins, who the Steelers are reportedly high on and was actually still on the board in this PFF mock.

With Darrisaw, our Josh Carney summed up his game this way:

“He’ll have to work on varying his pass sets so as to not let rushers hone in on what he’s doing presnap, but the obvious improvement year over year in college leads me to believe he has the highest ceiling of the bunch in this tackle class, and one well worth a top 15 pick.”

The Steelers re-signed Zach Banner to start, but could still add another tackle to play opposite of him. Chukwuma Okorafor was a 15-game starter at RT last season, but wasn’t overly impressive and is entering the final year of his rookie deal.

Obviously, this isn’t a prediction from PFF. This is a dream, “if it all fell right” scenario, and the mock was unique in the sense that multiple players were mocked to multiple teams. In reality, there hasn’t been a ton of public interest in Darrisaw. He did say the Steelers had a Zoom call with him, but Mike Tomlin nor Kevin Colbert attended the Hokies’ Pro Day. Instead, they attended Florida State’s. Darrisaw’s chances of falling this far are low. Most mocks have him going between 10th and 16th overall.