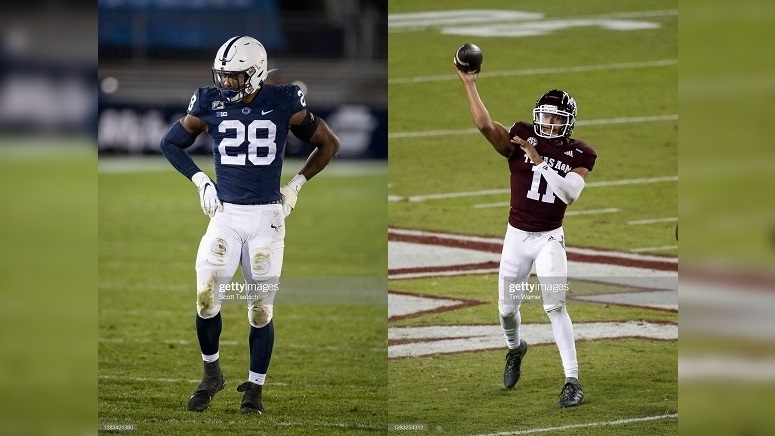 The 2021 NFL Draft is now less than 30 days away and with pro days now wrapping up this week, we can probably expect another big rush of mock drafts over the course of the next 10 days. In fact, a new two-rounder surfaced on Monday from Ryan Wilson of CBS Sports and it’s quite a unique one at that as it has the Pittsburgh Steelers going edge rusher and quarterback with their first two selections.

In the first round at 24th overall, Wilson has the Steelers selecting Penn State edge rusher Jayson Oweh. Below is his reasoning for doing so.

The Steelers need a QB, offensive tackle, RB and CB. But given the way the board fell they opt for a pass rusher. Oweh is raw but has the physical tools the Steelers covet, and in a few years we could be talking about him the way we were talking about Bud Dupree once he grew into his role.

Steelers general manager Kevin Colbert and head coach Mike Tomlin were both present at the Penn State pro day recently and they got to see Oweh put on a show as the underclassman edge rusher ran his 40-yard-dash in just under 4.4-seconds and posted a short shuttle time of 4.15-seconds to go along with a vertical jump of 34.5-inches and a broad jump of 11’2″. Oweh, who measured in at 6047, 257-pounds at his pro day, also did 21 reps on the bench.

For his college career, Oweh registered seven sacks, 63 total tackles and two forced fumbles in 20 games. He failed to register any sacks during the 2020 season, however.

The Steelers selecting an edge rusher in the first round this year would be a bit of a surprise, however, and especially on the heels of it looking like second year outside linebacker Alex Highsmith showing during his 2020 rookie season that he can potentially be a fine heir apparent to previous starter Bud Dupree, who signed with the Tennessee Titans as an unrestricted free agent this offseason. That said, the Steelers really don’t have much in the way of depth behind Highsmith and fellow starting outside linebacker T.J. Watt with less than 30 days to go before the 2021 NFL Draft takes place.

As for Wilson’s second-round selection for the Steelers, Wilson has it down as being Texas A&M quarterback Kellen Mond at 55th overall. He didn’t give any reasoning for mocking Mond to the Steelers in his latest offering, however.

Mond did say during hid pro day media session that he’s talked to members of the Steelers organization several times already during the pre-draft process.

“I have talked to the Steelers a couple of times,” Mond said. “Don’t want to say any names but I’ve definitely had some great talks with scouts and higher-ups.”

The Steelers have quite a few more pressing needs than a quarterback this offseason so it would be a mild upset to see them select one in the first two rounds of this year’s drag and especially if they weren’t able to draft one of the top five at the position, which most don’t have Mond being one of.

While stranger things have happened, it’s hard to imagine either Oweh or Mond being selected by the Steelers at the spots that Wilson has them. If either should slip further, however, that’s a completely different story.