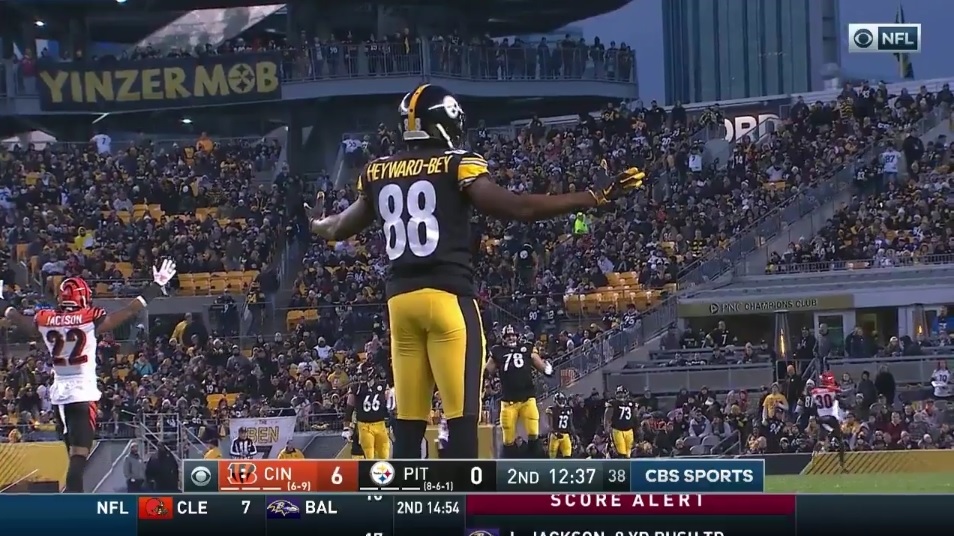 Former Steelers’ wide receiver Darrius Heyward-Bey wasn’t a man of many words in Pittsburgh. But he opened up about his football career and time with the black and gold in an appearance on the 3 and Out podcast hosted by John Middlekauff.

DHB’s story is well-known. A former top 10 pick who lit it up at the Combine, he failed to meet those lofty expectations in Oakland and quickly flamed out there. After a year in Indianapolis, Heyward-Bey put together five strong years in Pittsburgh, evolving from first round pick to core special teams player.

Heyward-Bey said he was hesitant about taking a visit to Pittsburgh when they wanted to bring him in.

“After Indy I got a call from my agent,” Heyward-Bey said. “He said, ‘Hey Pittsburgh wants to bring you in. I was just coming off of a hamstring injury in Indy. I’m like, ‘Hey, I can’t workout. My hamstring is not good.’ My agent said they just want to bring you in, get a feel for the person. So I went out to Pittsburgh met with Tomlin and Kevin Colbert the GM and had a good conversation. They wanted to know where my mind was.”

In typical honest fashion, Tomlin made DHBs’ potential role very clear to him.

“Coach Tomlin just laid it out. We want football players. Nothing is going to be promised to you. You’re just going to work. I think that was an environment I needed. I needed an environment that wasn’t hey you’re going to start. We’re going to bring you in and here you go.”

Heyward-Bey’s contract reflected that. He signed a one-year deal for the minimum. In that first season with Pittsburgh in 2014, he caught just three passes the entire season. But he began to find his footing running down kicks and punts, recording six tackles. By 2015, he realized he could make this niche his path to staying in the league.

“My second year in Pittsburgh,” he said when he understood his special teams potential. “That first year was still learning. Learning the lingo. I had never been in a special teams meeting. That second year was when I realized I could become good at this. As I was becoming good at that, I was becoming the best receiver I had ever became. I give that credit to Coach [Richard] Mann, the wide receivers coach, and being around, in my opinion, the fourth-best wide receiver of all-time. Antonio Brown.”

Heyward-Bey never put up big receiving numbers, but he did become a slightly bigger part of the offense. In 2015, he caught 21 passes for 314 yards and two scores. He was a big-play threat who averaged almost 16 yards a grab in Pittsburgh. He also had a 60-yard rushing score in 2016 via an end-around versus the Miami Dolphins. DHB served as a mentor to the young group of receivers under him. Antonio Brown was the player rookies learned from by watching. DHB was the player rookies went to in order to learn the playbook and the nuances of the game.

Heyward-Bey said he had a great time in Pittsburgh. And he loved playing in the rough ‘n tumble AFC North. He said the locker room had a different view of the Cincinnati Bengals, then a team on the rise, compared to their respect for the Baltimore Ravens.

“It was hatred. It was real hate. The way they went about their business we just didn’t like. We looked at them as pretenders. We looked at us and Baltimore as equals. And we looked at, of course, the Browns at the bottom.”

DHB’s career arc is one of the most unique of any player, let alone any first round pick. Plenty of first round picks play like first round picks. Plenty don’t and fall out of the league. Very few of them are able to reimagine their career and find a new way to contribute the way he did. He went from being the star in high school, college, and in Oakland before becoming a role player in Pittsburgh. There’s a mentality and humility there that’s rare for anyone once labeled a star to possess.