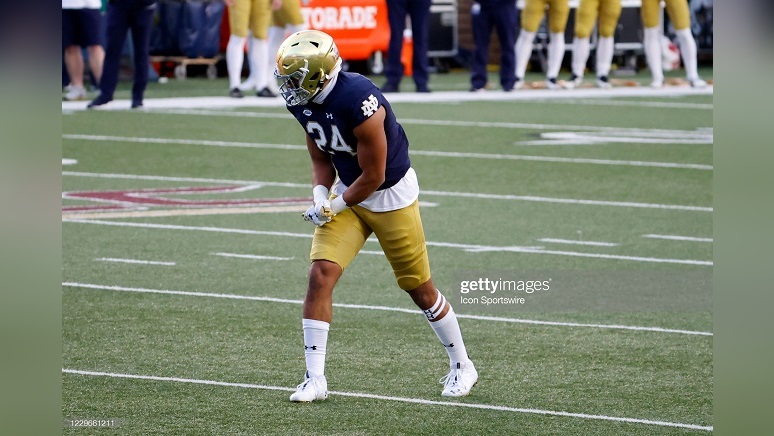 The Pittsburgh Steelers certainly appear to have some level of interest in Notre Dame tight end Tommy Tremble ahead of the 2021 NFL Draft. So with his Pro Day now past us, it’s probably a great time to contextualize his targets from the 2020 season.

For his college career at Notre Dame, Tremble is in the books for having caught just 35 total passes for 401 and four touchdowns over the course of the last two seasons. During the 2020 season, however, Tremble caught just 19 passes for 218 yards and no touchdowns. For the purpose of this contextualization post, I watched all 10 of his 2020 games that Tremble registered targets in, and charted them all. That play-by-play data of those 25 total targets I found is below. I also only found 18 of the claimed 19 completions, as there seems to be a discrepancy with one in the Duke game.

In total, in the 10 games that I watched from last season, Tremble caught 18 of his 25 total targets. He did register a healthy average intended air-yard distance of 9.08 yards on those 25 total targets. Additionally, his average air yard completion distance was 8.45 yards on his 18 receptions. Additionally, 11 of those 18 receptions came eight or more yards past the line of scrimmage.

On his 18 receptions in 2020 that I watched and contextualized, Tremble averaged just 3.22 yards after the catch. It’s worth also pointing out that Tremble had three drops in these 25 total targets, and that’s not great.

For a small sample size, Tremble’s target tape is not bad at all. That said, he is not a nuanced route runner just yet. He can, however, get down the field and off the line of scrimmage. Six of his receptions came in the middle of the field between the hashmarks, as well.

Tremble is obviously known quite well for his blocking during the pre-draft process. His RAS score of nearly 9.0 from his Pro Day shows that he has some athleticism as well. It would have been nice to see him do the three-cone and short shuttle, but sadly he did not do those two drills at his Pro Day.

Tremble does have a George Kittle feel to him. Kittle, however, had a little more college production as a pass catcher, and was a much more aggressive and all-around blocker than Tremble has been the last two seasons. Predicting Tremble to ultimately get drafted within the first 100 picks feels a bit too bullish based on his 2020 tape. That said, he should be off the board in the first 140 selections of the 2021 NFL Draft.

It’s obvious why the Steelers like Tremble, as he’s a player that should be able to contribute as a rookie both as a run blocker and occasional pass catcher. He should be able to play some on special teams as well.