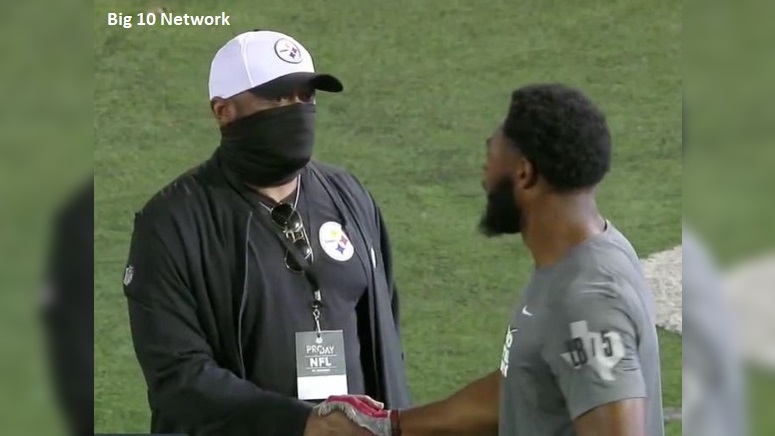 The Pittsburgh Steelers are known to like Ohio State players quite a bit and it’s hard to remember the last time they didn’t have heavy representation at the schools pro day. On Tuesday, Steelers head coach Mike Tomlin and general manager Kevin Colbert were again present for the Ohio state pro day and they both were easy to spot At one point during the pro day coverage by the Big 10 Network, the cameras caught Tomlin talking to Ohio State linebacker Baron Browning. After the pro day was over with, Browning was asked about that exchange he had with the Steelers head coach during his media session and if he would like to play for Pittsburgh.

“I would love the opportunity to play for anybody that drafts me,” Browning said. “And kind of when I was just talking to him [Tomlin], I was just kind of speaking. I had a Zoom [meeting] with him a while back ago, so I was just, you know, speaking, that was pretty much it.”

“I think it helps me a lot because it doesn’t put me in a box,” Browning said. “I think if I go into a system where they might get somebody at the one position, they thought they wanted me to play, I can bump over and play another position. I have flexibility, so I think that’s kind of why a lot of teams like what they see out of me.”

For his college career at Ohio State, Browning registered 109 total tackles of which 19 resulted in lost yardage. He also had seven sacks, two defensed passes, two forced fumbles and two fumble recoveries at Ohio State in 32 games played in.

Browning was at the Senior Bowl earlier in the offseason, so the Steelers probably had some contact with him while in Mobile, Al for that college all-star week event as well. Our own Tyler Wise has already completed a thorough scouting report on Browning, and you can read it by following the link below.