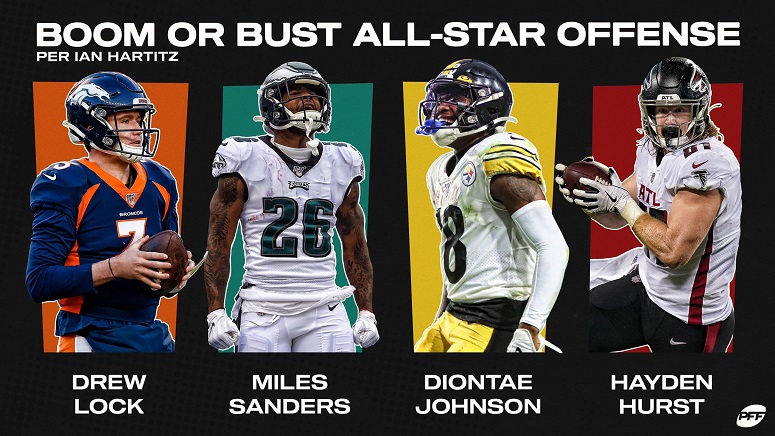 Pittsburgh Steelers wide receiver Diontae Johnson improved his numbers in his sophomore 2020 season as the Toledo product and former third-round draft pick recorded 88 receptions for a team-high 923 yards (10.5 yard per reception average) and seven touchdowns. Johnson also led the Steelers in targets with 144 as well. Johnson, however, also led the NFL in drops in 2020 with 15. That dubious stat is likely why Ian Hartitz of Pro Football Focus has Johnson on his 2021 Jameis Winston All-Star Team, which is a team comprised of boom or bust players for this season.

Here’s the thing: Drops aren’t necessarily a good metric to judge a receiver on. Yes, catching the football is objectively priority No. 1 during the course of any given pass play. Also yes, drops as a volume stat tend to reflect receivers that managed to get open as opposed to truly bad players. This is reflected by the reality that Johnson isn’t exactly in bad company atop the leaderboard: Tyreek Hill (13), Jerry Jeudy (12), D.K. Metcalf (11) and Stefon Diggs (10) were also in the double-digit drop club last season. A look at the double-digit drop club from 2012 reveals plenty of future hall of famers have had similar issues.

This isn’t to suggest Johnson doesn’t need to work on his hands; he still ranked 13th in drops per target among 137 players with at least 50 pass-game opportunities last season. Just realize that between the injuries and drops were regular flashes of brilliance in all facets of the game.

In Johnson’s third NFL season he will be expected to improve even more and that will mean him catching 100 or more passes for 1200 or more yards. Additionally, the drop problem that Johnson had in 2020 will also be expected to diminish quite extensively.

If things go well for Johnson in 2021, he will be in line to get an increase in pay in 2022 as part of him qualifying for the NFL’s Proven Performance Escalator. It would also be great to see Johnson do enough to receive some All-Pro consideration in 2021 as well.

“I bounced back,” Johnson told Teressa Varley of steelers.com in March about his 2020 season. “I had to bounce back. I had a lot of eyes on me, people counting on me. I couldn’t fold. I came too far to just go into the gutter. I had to come back and show them I am still Diontae Johnson. I showed that and will continue to show that this upcoming season.”