The 2021 NFL salary cap has now been set and the number is $182.5 million. Based on that number, the Steelers currently sit $6,187,086 under the cap with the deal for wide receiver Ray-Ray McCloud and expected exclusive rights free agent tender for inside linebacker Robert Spillane still pending. On paper, that looks okay and especially with one full week remaining before the start of the new league year on March 17. That said, that $6,187,086 in available salary cap space the Steelers have right now is essentially already spoken for due to predictable fixed costs the team will have before the 2021 regular season gets underway. 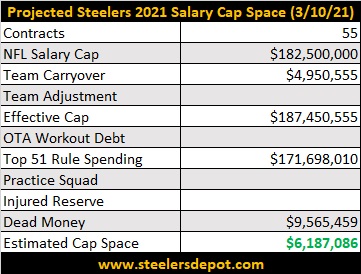 For starters, the Steelers will need to still be able to afford their 2021 draft class and undrafted free agent group. That projected salary cap space needed as we sit here today figures to be somewhere around $1.7 million (+/-) after roster displacement takes place. It could shrink some depending on what happens in the next few weeks but if it does, it will not be by much.

Moving forward, the Steelers will need to be able to afford a 52nd and 53rd player as currently the NFL is still working under the Rule of 51 and will until Week 1 of the 2021 regular season. Assuming the 52nd and 53rd players have cap charges totaling around $1.56 million, that’s the exact cap space needed to afford them.

If the NFL continues with 16-man practice squads for the 2021 season, the Steelers will also need to be able to afford that forthcoming cost by Week 1. We are still officially awaiting word on if there will be a 17-game schedule as well. For now, go ahead and count on the Steelers needing around another $3 million in salary cap space to afford their 2021 practice squad.

Assuming there will once again be offseason workout pay distributed this offseason, that will need to be accounted for as well under the cap. Estimations right now are that the placeholder amount that will likely be charged to teams against their salary cap sometime in April is $792,000.

But wait there’s more. The Steelers will also need in-season salary cap space to work with come Week 1. There is no way of knowing exactly how much the Steelers will want to have available for in-season moves but it is hard to imagine that number being less than $8 million in total. Like it or not, that’s forthcoming cost that must be accounted for.

So, where does that leave us in expected and projected cap costs the Steelers must be able to afford post March 17? Roughly around $15.052 million in total, give or take. Obviously, the bulk of that amount is the in-season space the Steelers decide to go into the 2021 regular season with and hopefully I have speculated on the high end of that amount. Even if the in-season space needed was as low as $6 million, the Steelers still would have roughly $13.052 million in post March 17 salary cap space they will need to account for. 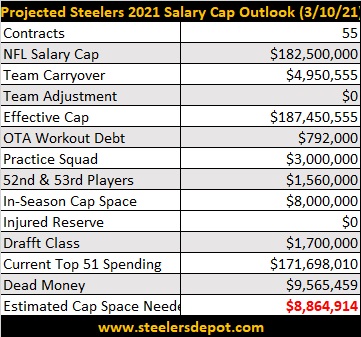 To recap, the Steelers still need roughly $9 million in salary cap space based on where they sit presently and hopefully that shot is a tad bit high to allow for margin of error.

While it has yet to happen, the Steelers are still likely to restructure the contract of defensive end Stephon Tuitt at some point before the start of the 2021 regular season and quite possibly kicker Chris Boswell as well. Full contract restructures on both players would free up $5.01 million in 2021 salary cap space.

Assuming Tuitt and Boswell get restructured and Williams has his contract terminated, those moves would put a huge dent in the projected $9 million post March 17 salary cap deficiency the Steelers have. In short, it would put them almost even.

Could we see a few contract extensions done with players such as cornerback Steven Nelson and guard David DeCastro progressing into the offseason? Certainly there is a chance of that. Those restructures would obviously create some 2021 salary cap space and perhaps as much as $7 million or so in total as a rough guess.

I have yet to address the possibility of the Steelers re-signing any of their own soon-to-be unrestricted free agents or any outside free agents and for obvious reasons as there just isn’t much projected cap space for such. While there are sure to be a few re-signings, most of the ones that are re-signed will be on the cheap and thus not eat too much into available salary cap space after roster displacement takes place. That short list of players could include the likes of tackle Zach Banner, defensive tackle Tyson Alualu, punter Jordan Berry, safety Sean Davis, defensive end Chris Wormley, safety Jordan Dangerfield, outside linebacker Cassius Marsh, tackle Jerald Hawkins, and outside linebacker Olasunkanmi Adeniyi to cheap one- or two-year deals with most being for the minimum.

As for other higher profile Steelers soon-to-be unrestricted free agents such as outside linebacker Bud Dupree, tackle Alejandro Villanueva, cornerback Mike Hilton, and running back James Conner, there all as good as gone at this point. Might the Steelers be able to retain wide receiver JuJu Smith-Schuster and/or cornerback Cameron Sutton in the next week? It really probably depends on how bad they really want both and how creative they can get when it comes to deals for them. Retaining Sutton is a lot more plausible because his expected market value is much lower than that of Smith-Schuster’s. As for any expensive outside free agents go, forget about it.

In closing this next week will be fun to watch play out for the Steelers as there are surely some more moves forthcoming. As soon as the dust settles after March 17, the official start of the 2021 NFL league year, I will provide another full recap of where the Steelers are at salary cap-wise and where they are going.