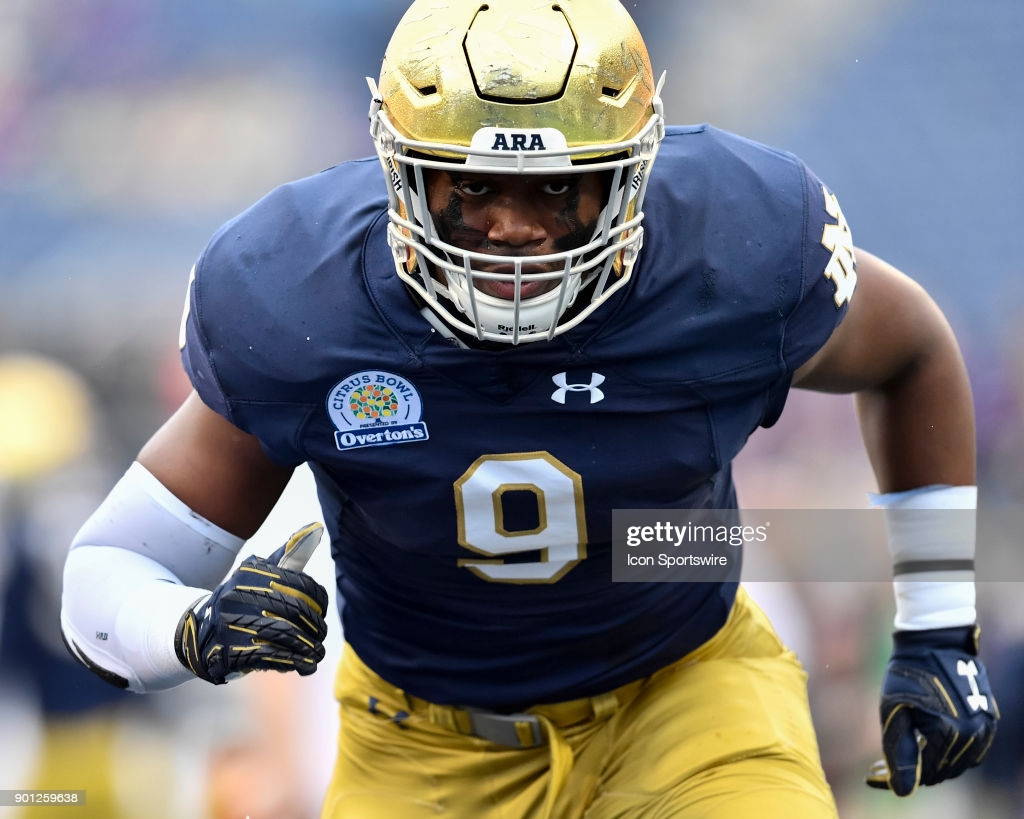 On the list of “guys you root for” in the 2021 NFL Draft, Notre Dame OLB Daelin Hayes might be at the top. No. He’s at the top. Hayes won’t be this classes’ top pass rush prospect. But he’s one of its best people, making as much an impact off the field as he has on it.

It’s hard not to be impressed listening to Hayes. He isn’t defined as a football player. Few have been as involved in his community as he has. Named one of three finalists for college football’s Jason Witten Man of the Year Award, Hayes’ list of work outside the locker room is almost too numerous to note.

At ND, he taught at the Robinson Community Learning Center twice a week. He was apart of the school’s Shop With A Player, where Fighting Irish players taking children Christmas shopping. He was part of Football & The Force, a charity softball game between players and local police officers. He participated in the Saint Mary’s College Dance Marathon for a local hospital and in Roof Sit, which raised money to prevent child abuse in the area. Hayes has worked at food banks, homeless shelters, and the local Boys & Girls Club. A clear leader, he was unsurprisingly named team captain of the football team.

For Hayes, his reason for giving back is an effort to pay it forward.

“It means everything,” he said during a Monday Zoom call. “For me, it starts with my mother. Growing up in a single-parent household, raising me and my two younger brothers, my mother sacrificed a lot of things. My mother had me when she was a 19 year old kid in college. She sacrificed her youth. She was a kid herself taking on an enormous responsibility with having me. My mother sacrificed a lot to be where I’m at and my brothers where we’re at as a family. So it started with that example. And then just paying it forward. I’ve been blessed with great opportunities with a great opportunity to go to Notre Dame, be a big-time recruit throughout my time in high school.

And now having the opportunity to play professionally. I wouldn’t be here today without countless sacrifices from my mother my grandparents, coaches, mentors. Who am I to take those opportunities and not pay it forward to the next kid, the next generation? To be able to serve as a voice of hope, encouragement, love. To give that back. Because that was given to me to get me to where I’m at. So I’m extremely thankful for the opportunity to be able to serve this community and the community moving forward wherever I end up. It’s something that’s near and dear to my heart. It’s vital part of who I am as a man.”

Hayes came to Notre Dame as a can’t-miss, five-star recruit. He could’ve gone anywhere in the country, choosing the Fighting Irish over offers from Alabama, Michigan (his hometown), and USC. But a series of shoulder injuries that began in high school followed him to college. He missed most of his senior year at Skyline High School with a separated shoulder. In 2019, his season ended just three games in after tearing his labrum. He also missed one game in 2018 with a stinger. It limited his five-year career to just nine sacks and damaging his draft stock.

Teams, however, remain interested in the former top recruit. Including the Steelers. Hayes has met with Pittsburgh multiple times, most recently holding a Zoom call with Mike Tomlin and Kevin Colbert.

Hayes will bring his football talents to wherever he calls his NFL home. But he’ll also bring his community work. On or off the field, his goals and aspirations don’t have a ceiling.

“Why not run for president? Me and Katie always joke that she’s going to be my campaign manager at some point. I’m joking around, It’s just putting my hands and getting to work in the community that I’m within, in whatever role that takes. For me as a captain this year, it was much more vocal. But service has been something that I’ve done since I got here on campus. That’s just something that’s just a part of the fabric of who I am and it’s going to continue to be a fabric of who I am as I move forward. So, what’s next as far as after football, I have no idea. Will I go into politics? I can’t answer that question right now. But I’ll tell you, one of the things I will be doing is that I will be serving and staying true to who I am and what got me here. That’s what’s kept me grounded throughout my entire time.”

As a projected Day Three pick, his NFL success may not be immediate. But Hayes isn’t one afraid of putting in hard work. Whether that’s meant rehabbing from shoulder injuries, becoming a better player on the field, or fighting for racial justice off it. Perseverance is the word that defines him.

“You put in the work, you put in the time, you dedicate yourself to something because that’s what the game requires. There’s no entitlement in the sense that you may never get to it. This may not play out the way that you want it to play out. Just because you work hard doesn’t mean the chips are gonna fall your way. It may take three, four or five years. You never know how long you might be in your grinding process. But you do so and stay the course.”

So Daelin Hayes might be a future President. Or NFL pass rush star. Listen to him speak for just a couple minutes and you begin to believe he’ll be both.