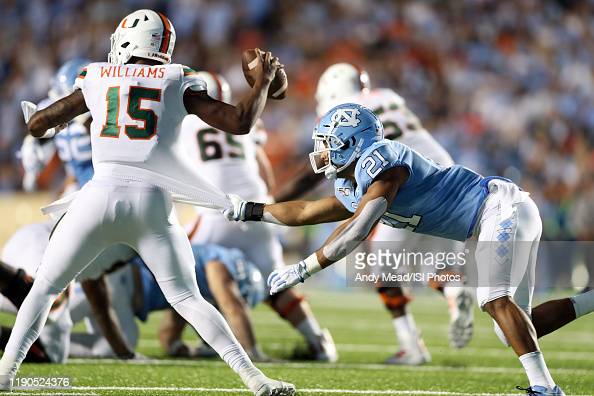 Quarterbacks changing positions is relatively uncommon. Not unheard of but uncommon. When they do, it’s usally to receiver or maybe tight end and occasionally even to safety. The quarterback-turned-linebacker story sounds like something Hollywood would gin up. But that’s the story of North Carolina’s Chazz Surratt. Came to school as a quarterback, left as a linebacker. And he thinks that gives him the leg up in the NFL.

When head coach Mack Brown arrived to Chapel Hill, Surratt made one thing clear. Move me to linebacker.

“He comes to see me and says coach, I want to play linebacker,” Brown said at Friday’s Pro Day presser. “And I said, well we need a quarterback. But he went nope. To me, I want to play in the NFL. That’s my dream. And I have a lot better chance to do that at linebacker than I do quarterback.”

Coach Brown rolled the dice and granted the request. It turned out to be the right call. Surratt starred for the Tar Heels, recording 206 tackles, 22.5 of them for a loss, and 12.5 sacks across the past two seasons. It didn’t always go that well though. In Surratt’s first game in 2019 against South Carolina, he missed a tackle that ended up in the end zone. That didn’t sit too well with defensive coordinator Jay Bateman.

“Jay Bateman is all over him,” Brown said. “And I remember grabbing Jay and saying, ‘he’s never made a tackle in his life in a game. Come on man. He’s learning on the run.'”

Surratt remembers that moment well, too.

“I missed the tackle and I remember Coach Bateman yelling at me,” Surratt said. “Coach Brown pulled me to the side and told me it’ll be alright.”

Surratt finished the game strong with 12 tackles and a sack. The light came on for him a few weeks later, playing a great game against Clemson, recording two tackles for loss, a sack, and two pass breakups in coverage. That’s when Surratt had the confidence he could play linebacker.

That translated into a chance to live his dream in the NFL. Testing for Surratt will be important at Monday’s Pro Day. Size is a bit of an issue, weighing in at the Senior Bowl under 230 pounds with 30 inch arms. But Brown believes the league is getting a quality linebacker on and off the field.

“He’s smart, he’s tough, he’s a workout freak. He’s in great shape. He watches what he eats and how he runs and works out. He’s gotten a lot bigger and he’s so fast. The things that he learned as a quarterback really helped him as he tried to figure out the plays on defense.”

The Steelers have done their due diligence at the position. Jerry Olsavsky has racked up frequent flyer miles with stops at Purdue and Missouri already. Limits on NFL personnel may not allow him to attend the Pro Day, it makes sense for RB coach Eddie Faulkner to watch Javonte Williams and Michael Carter Jr. but Olsavsky and the Steelers have done their homework on Surratt. He’s projected to be a third round pick, according to NFL Mock Draft Database’s aggregate ranking.