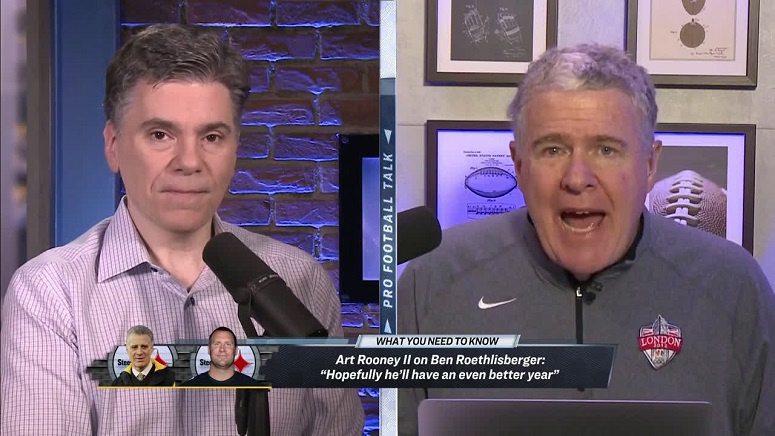 A lot of fans of the Pittsburgh steelers believe the team made the wrong decision in letting quarterback Ben Roethlisberger return in 2021 for an 18th NFL season. They aren’t alone, however, as most major media NFL analysts share that same opinion with Mike Florio and Peter King of Pro Football Talk being included in that group. On the heels of Steelers team president Art Rooney II talking on Thursday during a question-and-answer session with fans of the team about the decision to bring Roethlisberger back for the 2021 season and how that was essentially the plan since the 2020 season ended, Florio and King decided to both weigh on the topic and both made clear they think the wrong decision was made,

“I’m not quite sure how the Steelers got to the point where they are so confident that Ben Roethlisberger is going to be even better this year,” Florio told King. “He’s 39. There were knee issues last year that they tried to downplay. He never showed up on the injury report with knee problems. There were persistent and rampant reports he had knee problems and maybe it’s just arthritic and he’s not getting any treatment so there’s no reason to disclose that he’s got the knee issue, but he clearly isn’t the guy he used to be and he’s going to be a year older.

“I just don’t get this. And again, this is the time of year for confidence that borders on delusion. I just don’t get it, Peter. I don’t know whether they wanted to give the fans one last ride with Ben Roethlisberger because they didn’t get it last year. I don’t know whether they just want to delay the point where the bandaid comes off and they have to find another quarterback. But I still believe when they get to November or December, one or both sides is going to regret the last ride of Ben Roethlisberger.”

If that wasn’t blunt enough from Florio, King, not surprisingly, went after Roethlisberger’s presumed lack of an offseason conditioning program as well as his weight.

“I hate to say it, I agree with you on that, Mike and I hate to see that because of the great career Roethlisberger has had,” King told Florio. “But look, if Ben Roethlisberger really rededicates himself and comes back to training camp in great shape, or better shape than he was in last December, I’ll change my thinking on this. But what bothered me down the stretch for the Pittsburgh Steelers is to see, look, first of all, he’s a tree trunk of a quarterback anyway. But when you see what’s going on in football today and how fast football has become, and you see Ben Roethlisberger’s inability to get out of the way, and not exclusively, but because he’s so heavy, or he was so heavy last year, and so that to me is part of this thing.”

King must be a fitness king as well as he seems to think he knows exactly how much Roethlisberger is currently overweight.

“He’d do much better if he was 20 pounds lighter and he came to camp in pristine condition,” King said of Roethlisberger. “And look, he’s not one of these guys who’s going to do the Tom Brady thing in the offseason or do the Drew Brees thing. And I just think like, really, and I said this at the time, at the end of the season, if I’m Art Rooney, if I’m Mike Tomlin, part of my conversation with Ben Roethlisberger at the end of the year is you got to come to camp in better shape and you’ve got to come to camp lighter. You need to be able to have better escapeability than you did at the end of last year.”

Even if Roethlisberger were to lose another 20 pounds, and I’m not saying that he needs to, mind you, he’s never going to have the escapeability he had five or six seasons ago. Sure, he no longer extends plays as much as he used to and that’s not shocking at all. He has, however, become a more cerebral quarterback the last several seasons to help make up some for him no longer extending plays as often as he used to.

Roethlisberger’s biggest problem the last few seasons he’s played is his inability to consistently connect down the field like he once did. The quick, short passing game has been his bread and butter for a while. He’s had to survive the last several seasons without much of a running game as well and that has hurt a lot.

The Steelers main goal this offseason is to fix the running game and if they manage to do so, and if Roethlisberger will start using more play action and be able to connect deeper down the field on a much more consistent basis, he and the Steelers offense should be fine. The last thing Roethlisberger needs to do in 2021 is drop back to throw 30-40 times a game on average. If he must continue passing that much on a per game basis, him losing 20, 30 or 50 pounds this offseason won’t make a damn bit of difference.

Will Florio and King’s assessment of the Steelers decision to bring Roethlisberger ultimately be right? We’ll see. In the meantime, however, the talk about Roethlisberger’s knees and weight as being the primary reason why he shouldn’t have been brought back in 2021 is just lazy and clickbait type of analysis and the same type we’ll probably continue to hear from the major media talking heads the remainder of the offseason.