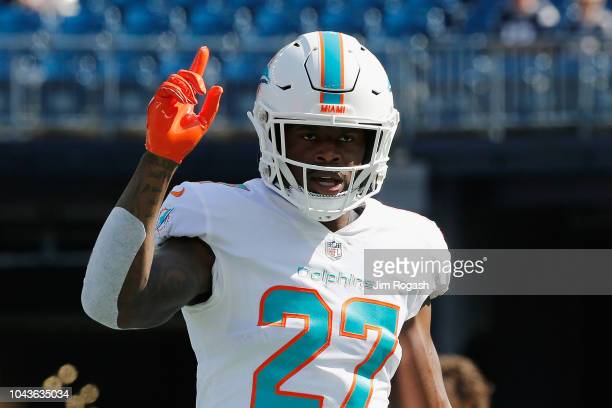 If you’re like me, you had plenty of jokes at the ready when the Pittsburgh Steelers announced they were signing RB Kalen Ballage.

Over the last two years, his longest run is 17 yards? Woah, he might be too much of a playmaker in this run game. I’m here all week, try the veal.

Signing Ballage isn’t moving the needle very much. It isn’t changing draft plans. He isn’t even guaranteed to make the roster. But if he’s going to lock down a roster spot, he can earn his keep in two ways. One, like virtually every backup, by cutting his teeth on special teams. And two, winning in short-yardage. Despite a lackluster career, Ballage has shown value in both respects.

Ballage has size and as an extension, he has some power. Coming out of Arizona State, he weighed in at 6’1, 228 pounds at the 2018 Combine. And that’s given him success in short-yardage areas. A worthy trait considering just how abysmal the Steelers have been in that regard the last couple seasons. Pittsburgh’s short-yardage struggles are well-documented and were especially problematic in 2020. It was literally a coin flip as to if the Steelers could convert on 3rd/4th and short.

Ballage, relatively speaking, has had success. Here’s how he stacks up against Steelers’ RBs since 2018. Their success rates on 3rd/4th down and 1-2 yards to go.

Ballage is almost 20% better than anyone the Steelers have thrown out there. If you want to break it down by back, Ballage beats out Conner (60%) and Snell (56.3%).

To be fair, offensive line greatly influences success. But Ballage has been with the Dolphins, Jets, and Chargers. Not exactly running behind the best front fives in football.

Of that list, here’s how the Steelers’ backs line up.

I could’ve given you a dozen guesses of where Ballage would’ve finished on that list. I would’ve never suspected top five. And perhaps it’s one reason to explain why his YPC has been as low as it is (though doesn’t explain it away entirely, to be clear).

So those are the numbers. What about the tape? I put together a collection of all of Ballage’s 3rd/4th down short-yardage conversions since coming into the league. Separated into two clips for you below.

The overall theme here is you’re getting a downhill runner capable of pushing the pile forward. Rarely do I watch run plays from the aerial view. But I did with Ballage to see him getting an extra two or three yards after contact on second effort. In the above clips, you see him square his shoulders, get skinny through the hole well for a big back, and drive his legs. He doesn’t go down easy.

You even see that on some of his bigger runs. Like this 14 yarder against the Raiders while with the Chargers last season. Nice jump cut out of the hole and then in the third level, he plants his outside foot, gets vertical, and puts his head into the sternum of the safety. Good finish.

Outside of that, there isn’t much to write home about when it comes to Ballage the runner. He tested well coming out of Arizona State, running 4.46, but he doesn’t look like it on tape. The run games he’s been part of have been poor but he moves so slowly I’m convinced he had to be dislodged from the Suez Canal before the Steelers could sign him.

As a receiver, he catches the ball cleanly and that power and break tackle ability shows up a little bit in space but he’s a checkdown option only. Not someone you’re going to design getting the ball to.

Backup running backs almost always need some level of special teams value. That’s one reason why Anthony McFarland had trouble getting a hat on gameday. Jaylen Samuels had a little more value on the punt block and kick return team. Benny Snell has carved out a great nice as a good special teamer, a stark change from his big-man-on-campus role at Kentucky.

He had a variety of roles there. Much of it came on the punt and kick return team. On the former, he saw work at the left wing spot on punt coverage. Ballage also, and this surprised me, got work as a gunner. Not often you see a RB lined up like that. Check out this Week 9 game in 2018 against the Jets. Ballage is lined up as the left gunner, #27, and makes the tackle here. Don’t think I’d call it a great rep but he made the play.

Ballage probably won’t be a gunner in Pittsburgh but he could get work on the wing. Especially if Miles Killebrew, hypothetically, becomes the new personal protector in replacing Jordan Dangerfield, who remains unsigned. There’s some special teams value here.

Overall, Ballage’s signing doesn’t move the needle much. And though there’s probably a bias in saying “hey, the guy the team just signed isn’t as bad as I thought” he isn’t dud of a runner the numbers would initially suggest. If the Steelers keep four RBs – a rookie, Snell, McFarland, and himself – Ballage can try to carve out a short-yardage role in addition to getting work on special teams. If he can do those two things, he’ll be worth keeping around.