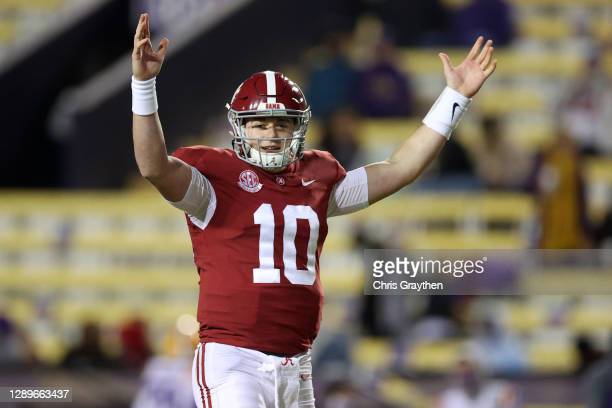 If Mac Jones winds up in Pittsburgh, Sports Illustrated’s Albert Breer will probably be the first to say, “I told you so.” In his latest mailbag and most recent mock draft, he says the Steelers could take a serious look at Jones at #24.

In a Wednesday mailbag, Breer concluded the article with this informed piece of speculation about Jones and the Steelers.

“And to wrap up here, I’d just warn you not to dismiss the idea Alabama’s Mac Jones could wind up being the pick at 24. GM Kevin Colbert’s mobbed up in Tuscaloosa—it’s part of why he was so strident in pursuit of Minkah Fitzpatrick, who Nick Saban gave teams glowing reviews on—and I think that could have an impact on how Jones is viewed in Pittsburgh. Jones is beloved in that program.”

Pittsburgh sent the house to Alabama’s first scheduled Pro Day earlier this week. With a max of three personnel members allowed to attend, the Steelers sent GM Kevin Colbert, HC Mike Tomlin, and new OC Matt Canada. There were roughly a dozen prospects worth checking out. But Jones will be one of the top Crimson Tide players off the board, perhaps only behind WR DeVonta Smith.

The Steelers are in the market to draft a quarterback either this year or next. If Jones does slip to #24, it’ll be interesting to see if Pittsburgh’s willing to make the move. Or if they’re truly in “win-now” mode in what could be Ben Roethlisberger’s final season.

Breer followed up that specu-report by linking Jones to the Steelers in his latest mock draft, basically writing the same thing.

“As we mentioned in the mailbag on Wednesday, GM Kevin Colbert’s connections in Tuscaloosa may have influenced my decision on this one, because I know how the Bama staff feels about Jones. So Colbert gets his Ben Roethlisberger heir here.”

To be clear, Breer is just trying to connect tea leaves. We still have no idea how the Steelers actually feel about Jones or taking a quarterback in the first round. Breer believes Nick Saban’s influence will rub off on the Steelers just as it did when he vouched for Minkah Fitzpatrick, a trade that worked out unbelievably well for the Colbert and company.

If the Steelers don’t get the opportunity to draft Jones, they could look at Florida’s Kyle Trask in Round 2. There have been rumors the team like Trask’s game. He’s drawn comparisons to Mason Rudolph, who the team had a first-round grade on before trading up for in the 2018 draft.