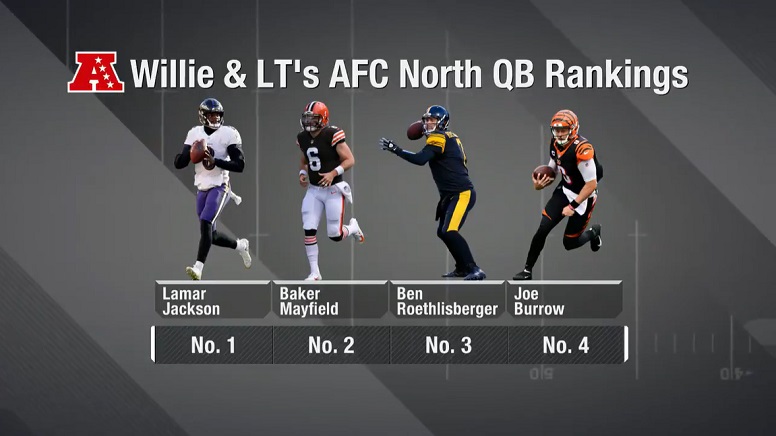 Barring something totally unforeseen this offseason, the four AFC North quarterbacks in 2021 will be the same four that started last season and especially with it now looking like Pittsburgh Steelers will be returning for an 18th season. With Roethlisberger now all but guaranteed to play for the Steelers in 2021, many NFL analysts and fans around the league now consider him to be, at best, the third-best quarterback in the AFC North division behind the likes of Baltimore Ravens quarterback Lamar Jackson and Cleveland Browns quarterback Baker Mayfield.

In a recent segment on the NFL Network, former NFL players-turned-analysts Willie McGinest and LaDainian Tomlinson both revealed their AFC North quarterback rankings three weeks ahead of the 2021 NFL league year getting underway and both have Roethlisberger ranked third behind Jackson and Mayfield with Cincinnati Bengals quarterback Joe Burrow in last place. McGinest was first up on explaining why he has Roethlisberger ranked third on his AFC North list.

“Well, we’re talking about now, right? And I’m not taking anything away from Ben, 18 years in and we just saw a quarterback at 43, who is special, win a Super Bowl and is the Super Bowl MVP,” McGinest said. “But I know Lamar Jackson is special and I put Baker in front of Ben because of what we’ve seen in the progression of Baker in the last couple of years; 26 touchdowns, eight picks. That’s the best year he’s had since he’s been in the league and I see him getting better and I see Ben fighting father time and the skills just diminishing a little bit.”

After McGinest explained his ranking of Roethlisberger, it was Tomlinson’s turn.

“Yeah, absolutely, it’s not how you start, it’s how you finish, right? And we have seen in spurts Big Ben play well,” Tomlinson said. “He started out hot, but he didn’t finish so well. As Willie just alluded to, he looked old and beat up toward the end of the season and I’m just not sure that improves. With Baker, Baker improved the entire season. He really had a grasp of [Kevin] Stefanski’s offense, and he made timely throws when he needed to. Lamar Jackson won his first playoff game. He played his best football down the stretch of last season. And then Joe Burrow, on a small sample, really showed a lot in his first year with no training camp, no offseason. 65% completion percentage, that’s impressive.”

While it is understandable as to why McGinest and Tomlinson both have Roethlisberger ranked third, the Steelers quarterback did lead the AFC North in passing yards and touchdowns thrown in 2020. Those stats are just stats, however, and certainly don’t tell the entire story. Without a doubt, Roethlisberger has a lot to prove in 2021 when it comes to showing he’s still the king of the AFC North. That proving will happen under a new offensive coordinator in Matt Canada and without veteran center Maurkice Pouncey, who retired a few weeks ago.

Last season, Roethlisberger wasn’t great with his deep pass attempts and didn’t push the football down the field nearly enough in his first season back from a serious elbow injury that wiped out most of his 2019 season. Play action also needs to return to his game in 2021 and perhaps a lot more pistol as well. Roethlisberger will turn 39 years of age on March 2 and that’s considered grandpa age in the AFC North.

Let me know in the comments how you would currently rank the four AFC North quarterbacks with three weeks to go before the start of the 2021 league year.