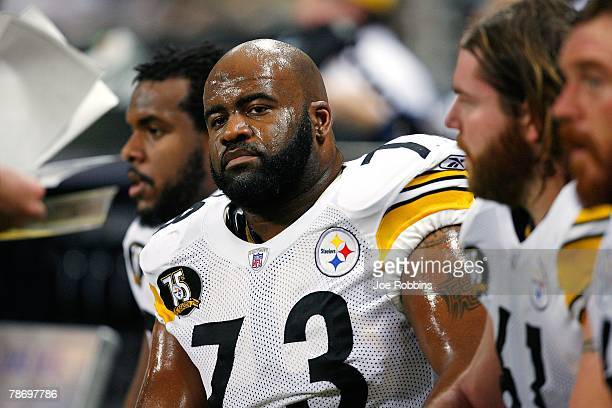 We know Kevin Colbert has built the reputation as one of football’s top college evaluators. His Steelers’ teams have been built primarily through the draft. He’s hit on first round picks like Cam Heyward, Maurkice Pouncey, TJ Watt, and of course, Ben Roethlisberger. He’s unearthed late round gems like Vince Williams, Kelvin Beachum, and Antonio Brown, one of the best draft day steals ever.

But now, we can put Colbert’s draft classes into context. Thanks to a great site created by Twitter’s Dan Morse, big kudos to him, you can use Pro Football Reference’s Approximate Value stat (which values every player/position, even offensive linemen) to compare to the rest of the league’s draft classes. And see who comes out on top. 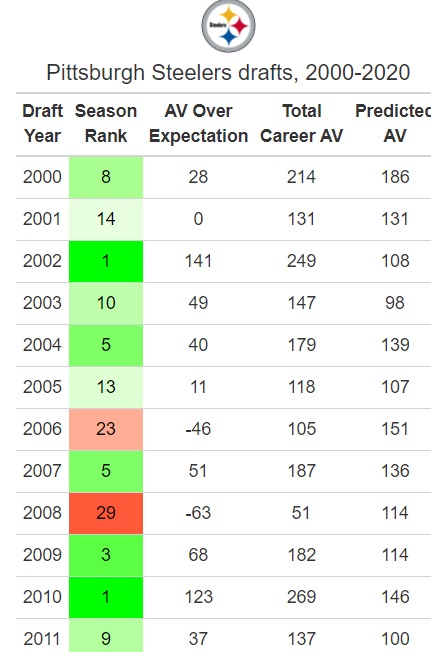 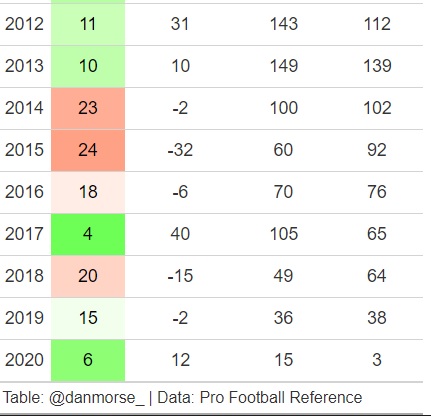 Colbert has finished with the best draft class from an AV standpoint twice. First in 2002, one of his more underrated hauls because it lacked a flashy, home-run pick. But Colbert hit plenty of doubles. At #30, he drafted guard Kendall Simmons who would go on to start 80 games for the Steelers. He followed that up with Antwaan Randle El, converting him from QB to WR, but using that QB skillset in big moments like Super Bowl XL. Chris Hope and Larry Foote were next in line in the third and fourth round. The draft rounded out with RB Verron Haynes in the 5th, WR Lee Mays in the 6th, DB LaVar Glover in the 7th before nailing his final pick with DE Brett Keisel. In total everyone sans Glover made some level of NFL contributions. Simmons, Randle El, Hope, Foote, and Keisel all became starters. Terrific class.

His other #1 came in 2010. Pouncey headlined that class with Colbert nailing the picks of Emmanuel Sanders in the third and AB in the 6th. Second rounder Jason Worilds was decent before his sudden retirement.

One year in, the 2020 group is on the cusp of being top five, coming in at #6 despite not having a first round pick. Chase Claypool, Alex Highsmith, and Kevin Dotson are all promising prospects.

Colbert’s worst class? The mess that was the 2008 group. RB Rashard Mendenhall in the first, WR Limas Sweed in the second (remember when we all thought he was a steal?) with Ryan Mundy being the most “successful” non first round pick of the lot. That was 29th worst in the league, which calls into question who somehow did a worse job evaluating that year.

Overall, the data confirms what we’ve suspected. Colbert isn’t batting 1.000 but he’s among the league’s best and most consistent drafters. It’s the reason for the team’s stability and consistency.