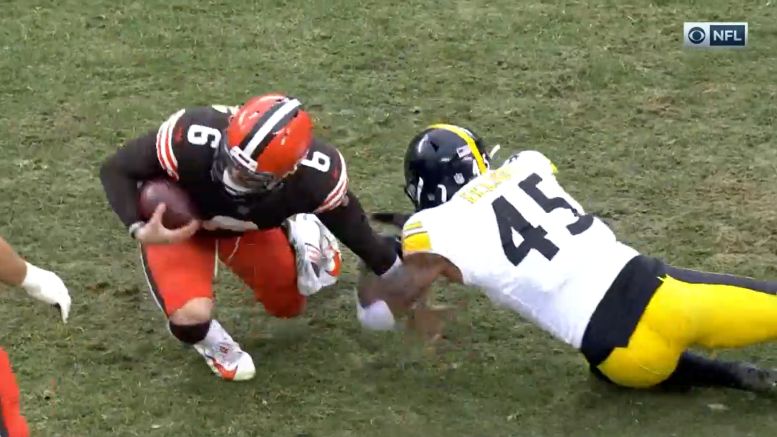 Jayrone Elliott has become somewhat of a familiar, if tertiary name for the Pittsburgh Steelers and their fans. Having originally come into the league undrafted out of Toledo all the way back in 2014, he has managed to make something of a career for himself, with total earnings topping a couple million dollars.

He first came onto the Steelers’ radar—or at least their roster—in the season before last, when he was signed during training camp in 2019. He made an impact in the preseason, but was not kept on the 53-man roster. He would be brought back after the season opener, however, following the trade of Joshua Dobbs.

That would begin a cycle of yoyo signings what have lasted the past two seasons. In all, he has spent probably about a season’s worth of games on the 53-man roster over the past two years, with some of the rest of that time being either on the practice squad or the streets.

Last year, he was active for a total of eight games, but he saw just four defensive snaps, compared to 81 snaps on special teams. He first dressed in late October as a member of the practice squad, for which he was not previous eligible under old rules.

Elliott would be signed to the 53-man roster in early November after the team waived veteran offensive lineman Stefen Wisniewski and running back Trey Edmunds. He would dress for the rest of the season, recording seven total tackles and a sack, most of that, including the sack, coming in the season finale.

But when Alex Highsmith was injured in the postseason, it was Cassius Marsh, another veteran signing, who actually got the opportunity to play. We’ll be talking about Marsh here tomorrow, but if one of the two are re-signed, he’ll be the one more likely to get a deal.

As far as Elliott is concerned, I think it’s safe to say that there won’t be a rush for his services on the open market. If the Steelers are interested in re-signing him, it would figure to be very easy to do on a one-year veteran-minimum deal, which with roster displacement would incur a salary cap increase of a few hundred thousand by replacing one of the cheapest contracts on the books for a player of lesser experience.

With T.J. Watt and Highsmith likely the starters, and Olasunkanmi Adeniyi likely to be brought back as a restricted free agent to be or compete as the number three, there is an opening for another spot on the outside linebacker depth chart, assuming that Bud Dupree leaves in free agency.

That could be Elliott. Or Marsh. Or a draft pick.