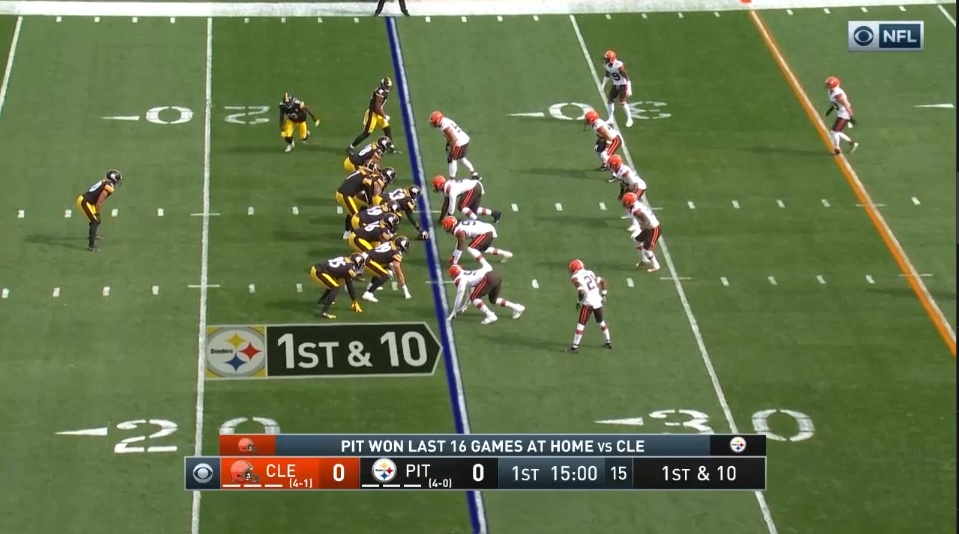 Highlighted several times during the week the Browns’ success using heavy personnel, 12 and 13 groupings, and then spreading the field out in empty. That keeps the Steelers in their base defense, asks LBs to cover (often times on WRs) and forces Pittsburgh’s OLBs to drop into coverage more often. There aren’t a lot of easy answers here versus empty but one solution is to play with a single high safety. Rolls the other safety closer to the LOS to rob any quick crossers to beat zone or to man up on a slot receiver so a linebacker doesn’t have to. Don’t play two-high versus these looks.

The million dollar question for Pittsburgh’s postseason success. There’s the possibility they could win this game without any sort of running game. Happened time and time again in the regular season. But their odds of winning certainly increase if they can do it and at some point on this hopeful four-game playoff run, the rushing attack will have to rise above “cover your eyes and pray.” Fingers crossed the turnaround starts today. Playing the Browns creates a little extra optimism. In two games against them this year, Pittsburgh carried the ball 57 times for 214 yards, an average of 3.8 YPC and three touchdowns. For most teams, that’s unimpressive. For the Steelers, we’re throwing a party.

Overall, the Browns have done a nice job protecting Baker Mayfield this season. Not so against the Steelers who sacked him eight times in two games. Pressure correlating to defensive stops and team wins is obvious. With the Browns playing with a depleted offensive line, definitely missing Joel Bitonio, possibly missing Wyatt Teller and Jack Conklin, the Steelers’ rush should win for a third time.

1. Baker Makes Plays On The Perimeter

QB contain a big coaching point here. Pittsburgh didn’t do a good enough job of that in the Week 17 finale. The downside of being an aggressive, risk-taking pass rush is giving up plays to mobile QBs. Pass rush needs to do their job and follow their assignments will still creating pressure, admittedly a fine line to walk. Give Mayfield an escape lane and he’ll bust off a chunk run or convert on third down.

Don’t assume Cam Heyward and TJ Watt returning dramatically changes the Steelers’ run defense. It might not. This until still struggled the back half of the season even with those guys playing (and playing a lot). Nick Chubb and the Browns have one of the best rushing attacks in football and carved Pittsburgh up last week. Secondary better come to tackle. Chubb’s 47 yard score last week proves what happens if you don’t. The area where you may feel Joe Haden’s loss the most is run defense. Bigger dropoff there between him and Cam Sutton than it is in coverage.

McCould has been the Steelers’ best kick returner in years and did well on punts too. But he hasn’t been quite as good the back half of the year. One issue is him trying to recreate that big-play magic, it’s especially obvious on punts, and he’s pressing a bit to make the SportsCenter Top Ten play than to get what’s there. In the playoffs, a returner who presses is setting himself up to fumble the ball away or run himself into an ugly, negative return. Take Dave Bryan’s advice. Catch ball. Run Straight.