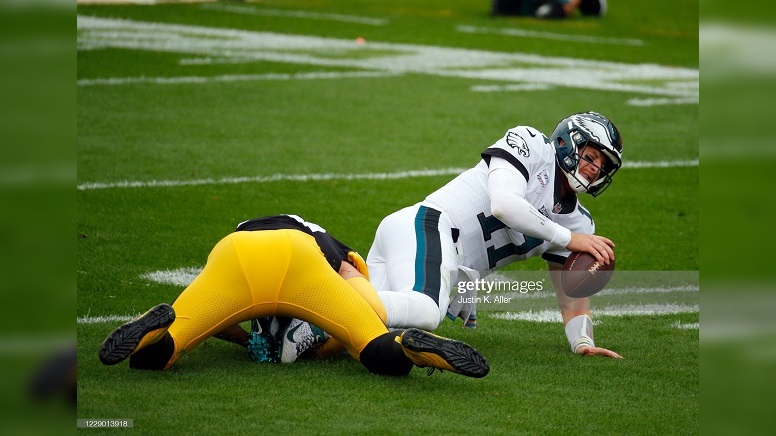 It seems almost certain that the Philadelphia Eagles and quarterback Carson Wentz will part ways prior to the start of the 2021 NFL league year in March. If that happens, which team will Wentz ultimately land with? While the Indianapolis Colts are seemingly the early favorites to land Wentz in some, way, shape or form during the offseason, one betting site has put odds on the Pittsburgh Steelers being a landing spot for the former first-round draft pick out of North Dakota State.

According to odds tweeted out on Tuesday by BetOnline.ag, the Steelers are now 9-to-1 odds to be the next team that Wentz plays for. The Colts are the favorites at 3-to-2 and that’s not surprising with Frank Reich being their head coach and quarterback Philip Rivers likely to retire after the 2020 season ends. Reich, by the way, was the Eagles offensive coordinator for two seasons in 2016 and 2017, which were Wentz’s first two seasons in the NFL.

One of the biggest obstacles associated with Wentz right now is his contract. He’s scheduled to earn a fully guaranteed $25,4 million in 2021. According to Over the Cap, Wentz’s 2022 base salary of $22 million will partially vest on the 3rd day of the 2021 league year with the balance guaranteed on the third day of the 2022 league year. There is no way the Steelers will trade for such a contract and they can’t because of their own current salary cap situation.

Will the Eagles find a team willing to trade for Wentz and his deal? We’ll see. If they can’t find any takers, however, they will likely need to bite the bullet and cut Wentz outright and take a huge dead money hit on their salary cap for 2021. If Went is ultimately cut by the Eagles, he would then be a free agent and thus free to sign with whatever team offers him the most pay and the best situation. That team won’t be the Steelers in 2021. Bet on that.