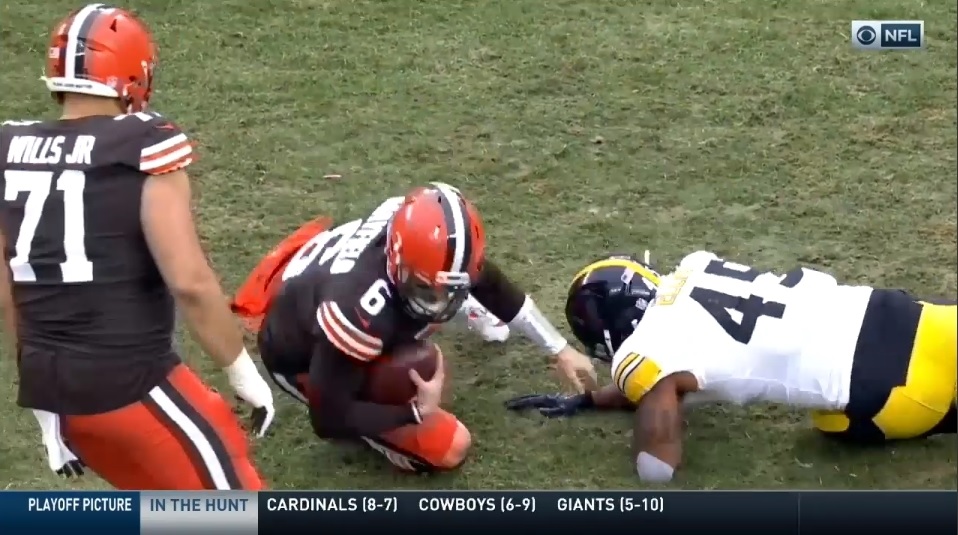 One more set of weird for the regular season. But we have a postseason football on deck and you know that’s when things really get strange.

– The Steelers’ offense/special teams scored zero points in the first quarter over their final seven games. They’ve scored one offensive touchdown in the last ten. And they have just one TD on opening drives the last two years. One out of 32.

– Mason Rudolph threw for 315 yards Sunday. The most he threw for in any game in his eight starts last season was just 251 yards. It’s the most yards he’s passed for in a game since his final game at Oklahoma State, throwing for 351 in a Camping World Bowl win over Virginia Tech.

– Josh Dobbs becomes just the third QB of the last ten years to throw at least five pass attempts in a game for two or fewer yards. Dobbs went 4/5 for 2 yards Sunday. He joins Kyle Lauletta, who went 0/5 in 2018, and Carson Palmer, who went 1/11 for zero yards in 2011.

Since 1950, Dobbs is one of two QBs in NFL history with at least four completions for five or fewer yards. The only other to do it was Detroit’s Greg Landry, who went 4/14 for three yards in a 1977 37-0 loss to the Cowboys.

To be fair, Dobbs got screwed over on the jet pass to Ray-Ray McCloud that lost three yards. That’s a run in the Steelers’ book but because it’s a pass that goes forward (that way, if it’s bobbled/dropped, it’s an incompletion, not a fumble) it goes against Dobbs’ numbers.

– This season, the Steelers ran for 1362 yards. Not counting the strike-shortened 1982 season, that’s the fewest Pittsburgh’s run for in a season 1966. And they played 14 game seasons back in those days.

– Another historic stat. But this is a good one. Steelers’ QBs were sacked just 14 times in 2020. That’s by far the best figure in team history since the 1970 merger. The previous record was 18 sacks allowed in 1974. It’s even better than the 19 allowed in 1982, where a strike shortened the season to only nine games.

– As Matthew Marczi wrote about, Chase Claypool ties the franchise rookie record of 11 total touchdowns set by Franco Harris in 1972 and Louis Lipps in 1984. His 62 receptions set a record for most catches by a Steelers’ rook, one more than Troy Edwards’ 61 set in 1999.

– Vance McDonald had half as many receptions on Sunday (five) as he did the whole year coming into the Browns’ game (ten).

– Jay Elliott was responsible for one of the team’s four sacks today. It’s his first sack since 2016 when he was a member of the Green Bay Packers. That’s over a four-year span.

– Despite playing in only eight games this season, and starting just four, Avery Williamson ended the year with 53 tackles as a Steeler. That tied with TJ Watt for fifth on the team. Kinda crazy.

– Going to add things on a sour note. Since the NFL went to a 16 game season in 1978, 11 teams have started a season 11-0. The Steelers are the only team to end the year with four losses. Only one other team even wound up losing three games, the 2009 Saints, who went on to win the Super Bowl.