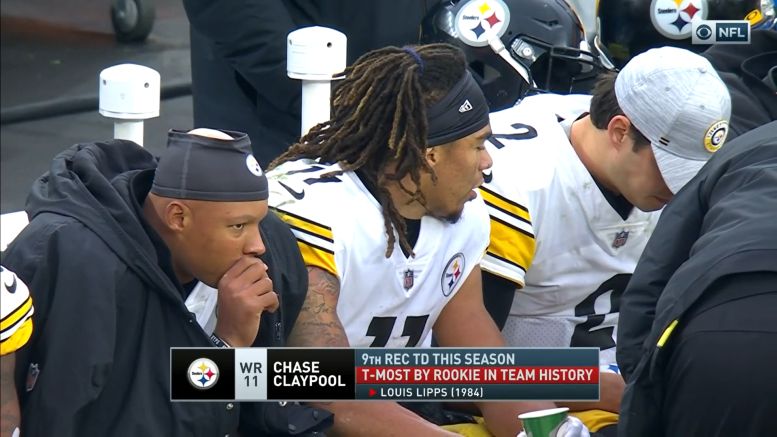 There wasn’t much for the Pittsburgh Steelers to play for in any sense, especially once it became abundantly clear that the Buffalo Bills would not be losing, and thus it would not be possible for them to move up from the third seed to the second. Basically, there were three things on the line.

One was the continuation of their NFL-record sack streak, which they accomplished in the first half when Chris Wormley got his first of the season. Another was finishing the season leading the league in sacks, which in doing so made them the first team in NFL history to do so for four consecutive seasons. Finally, there were franchise rookie records for Chase Claypool to chase.

The one in most obvious range was the franchise record for receptions in a rookie season, held by Troy Edwards when he caught 61 in 1999. He came into the finale sitting at 57 receptions, needing four to tie and five to take over the record single-handedly.

He managed to accomplish that into the fourth quarter, moving over 100 yards on the day on the same play. In fact, it was a 28-yard touchdown pass, certainly one of his most impressive receptions of the season with plenty of fighting through with the defender.

He accomplished two records on the same play, surpassing Edwards for receptions and tying Lipps and Harris for the most receiving touchdowns and overall touchdowns with roughly 10 minutes left to play in the game.

Finally, while it was the biggest longshot of the group, Claypool was also in range of the franchise rookie receiving yardage record, entering the game with 772 yards, needing 145 to tie JuJu Smith-Schuster’s record of 917 yards set in 2017. The rookie had just one 100-yard game on the year, going for 110.

His fourth-quarter touchdown gave him his second 100-yard game of the year at 101, needing 45 more before the game was through in order to surpass Smith-Schuster.

He fell short of that mark, but there is no shame in tying or surpassing three rookie franchise records in the same game. He was the target on a potential game-tying two-point conversion attempt with under 90 seconds to play, incomplete on a ball that was too high.

Claypool ends his rookie season having caught 62 passes for 873 yards and nine receiving touchdowns, 11 touchdowns overall, certainly one of the best rookie seasons, particularly by a wide receiver, that the Steelers have ever had. It bodes well for his future, certainly.