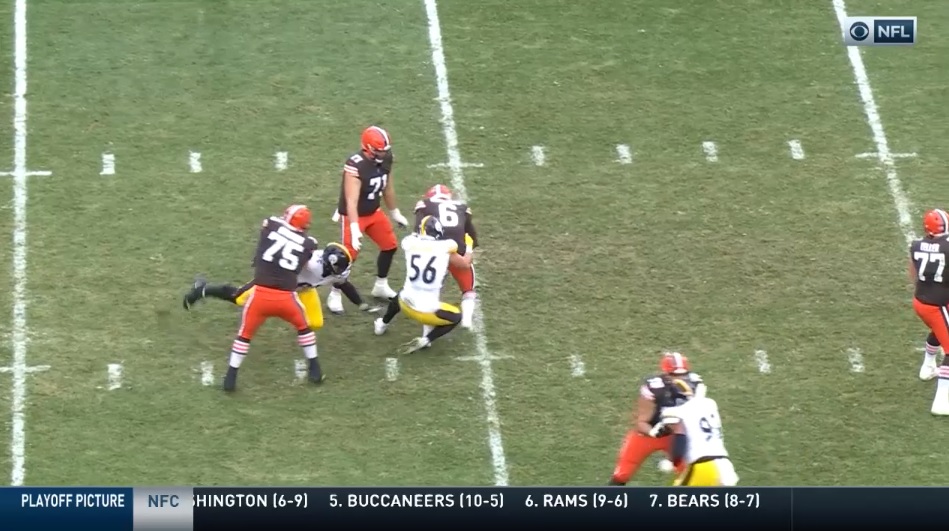 He finished the regular season with his second one hundred yard game and his second highest number of targets. The majority of his routes were Fades, Outs and Go routes.

His first target was on a slant where he showed a very good release on a slant and got 6 yards after the catch. He used the same release on the same route later n the game but the ball was slightly behind him and a little late that got knocked away.  His second catch was on a quick out. He showed another good release on a Go route to stack the defensive back on his next target followed by a miscommunication with the quarterback on the next.

His first deep reception he used straight speed down the left side to gain 41 yards. Then next three targets were a Curl in the middle (catch) and incompletions on a Seam route and an Out route. His final catch came on a fade route were he adjusted to the ball well and made a contested catch for the touchdown.

He added one tackle on kick coverage making a play near the sideline for his first tackle since week 6.

Here is route down the right sideline where he slows his route.  This throws off the timing of where the QB is throwing the ball.  It doesn’t mean he would have caught it could have made a difference.

He set a season high in tackles for the second week in a row and has 28 tackles in 5 games as a starter. He started off the game hot with three consecutive tackles. Two were on runs to the inside where he stacked the blocker and got off to make the play. The third was in coverage on a wide receiver from the slot.  He had a few reps in Man coverage early and a few in Zone later in the game.

Tackles 4 and 5 were also of the stack and shed variety like the first two. His mental processing versus the run was on point. A couple times he read pulling offensive lineman and raced inside behind the defensive line to fill gaps

If you’ve been following this weekly article you’ve heard me mention that he needed to use his hands more effectively.  I think this was the game where it finally showed up.  He was effective using swipes and lifts to get the OT’s hands off of him leading to more pressures in the backfield.  He was using a variety of moves and the spin was very good twice.

His sack came on play where he was chipped by the tight end and used a swipe to clear the outside arm of the tackle. He had a hand in the sacks by Jayrone Elliott and Stephon Tuitt as well forcing the QB to move up in the pocket.

This two play sequence shows Highsmith verses the run and pass in the red zone.  He will first aggressively take on the block of the tight end, lifting his right leg off the ground, to force the run inside. And the next play he will use a spin to beat the tackle to the inside to get in the pocket.

McFarland received his second highest number of carries and was part of the package using Josh Dobbs. His production was similar to what he has done recently where he makes some good choices and some not so good. He still seems wound up in his first few touches and relaxes a bit more as the game goes on.

Is first carry was off right tackle and I felt he cut it up too quickly and should have stretched it a bit more. His second carry was to the middle but the Steelers had one fewer blocker than defenders in the box so there was a safety in the hole. His third touch showed his jumpiness. The carry was to the left and he jumped forward, and then left before cutting back inside to get a couple yards. His fourth carry was the same play as the first (including the same motion) and was clogged up by a defensive back taking on the pulling blocker. His final run was up the middle and he read the block of David DeCastro and made the right gap choice in his best run.

He got a chance to block twice on fly passes to Ray-Ray McCloud. The first he missed the most dangerous defender after getting to the edge and that player made the tackle. The second time in the same scenario he made the adjustment and made that block. His one target came on a flat route where Dobbs scrambled and threw it high.

As a run blocker, Dotson was solid overall.  On double team blocks he got good push and showed good timing on combo blocks to get to the second level.  When blocking one on one he displayed good play strength and footwork but his pads were a little high.  On reach blocks he showed good initial quickness but wasn’t able to get his hips around to cut off the defender and he got out over his toes on pull blocks even getting yanked down on one play.

In pass protection, Dotson had another good performance.  He plays with a good base, pad level and core strength allowing him to anchor and handle power rushers.  His awareness was very good on twists and stunts handling them quite easily and he knows when to help teammates.  The one play that didn’t look good was on the blitz that caused the interception.  The Browns sent 6 players and he didn’t block anyone. It may have been an error on his part.

He has performed well on the left and right guard positions and may get the start this week as well.

On this run to the right Dotson (69) shows good initial quickness but if he swings himself around to the right and walls off the defender it sets up a nice running lane.

Brooks got some snaps for the fourth time this year and they were in a variety of ways getting in on kick coverage, kick return and punt return but didn’t make any plays worth highlighting.

Davis got a couple series in the second half and even got in on a tackle.  His motor is good always trying to get to the ball. He shows adequate quickness at the snap and flowed to the ball well laterally. He gave good effort to fight through blocks despite his balance being a little erratic.

When rushing the passer he got locked up by the blocker fairly easily and didn’t produce any pressures.

Pierre received a season high number of snaps on defense in the fourth quarter.  He played mostly on the right side with one play on the left.  He was used in Press Man, Off Man and Zone coverage but was not targeted. Against the run he flowed to the ball well but did not get in on any defensive tackles.

He did get a tackle on punt return when the returner fielded the ball on the bounce and was taken down by him and Justin Layne. He was his usual steady self on punt coverage winning the majority of the reps as the left gunner.  Ditto for blocking the gunner on punt return with only one rep really considered a loss.

Inactive for Week 5 – None