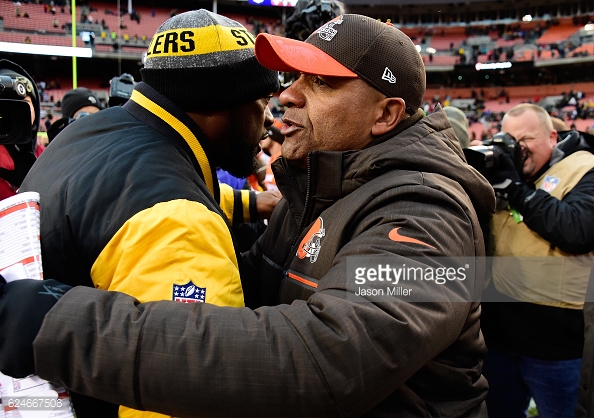 The Pittsburgh Steelers reportedly interviewed Hue Jackson for their offensive coordinator vacancy, according to this tweet from ESPN’s Dianna Russini.

Jackson has been out of the NFL for the past two years. His most recent prominent role in the league was serving as the Cleveland Browns’ head coach from 2016 to 2018. There, he compiled one of the worst records of any head coach, going 3-36-1 with the Browns. That included a winless 2017 season. He was fired midway through 2018 after starting 2-5-1. He briefly served as an assistant coach to then-Bengals’ coach Marvin Lewis the rest of the year.

Jackson has been an offensive coordinator several times. First with Washington in 2003 then again with Atlanta in 2007. He was Oakland’s OC for 2010, leading the Raiders to a top ten offense, before being named their head coach the following season.

He was named the Bengals’ OC in 2014, helping to lead Cincinnati to two winning seasons, including a 12-4 mark in 2015and AFC North crown. Jackson has always seemed to produce good results as a coordinator but massively failed as a head coach. Interviewing Jackson would also fulfill the Rooney Rule, mandating teams interview at least one minority candidate for coordinator vacancies.

So far, the only two names linked to the Steelers’ offensive coordinator job have been Matt Canada and now Jackson. A report yesterday indicated Pittsburgh wouldn’t hire a coordinator until filling their offensive line coach vacancy. The Steelers have an interview set with former Lions’ OL coach Hank Fraley today.