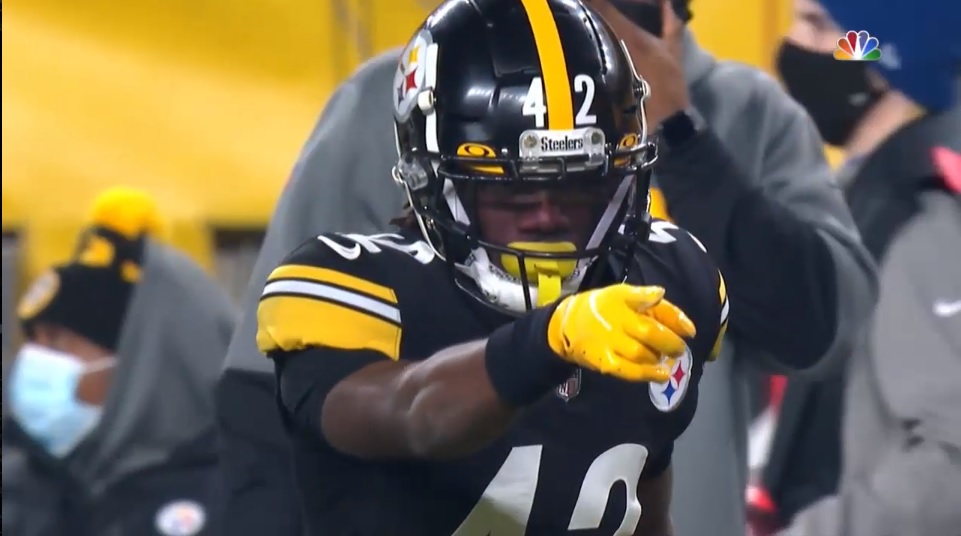 One of the biggest surprises Sunday night, other than the result of the game, was rookie undrafted free agency cornerback, James Pierre, receiving defensive snaps. While he only was on the field for eight defensive snaps against the Cleveland Browns, they were good enough for Pierre to be one of the three highest-graded Steelers defenders by Pro Football Focus.

Pierre’s PFF grade going along with the fact he was granted snaps over Steelers former third-round draft pick, Justin Layne, intrigued me to take a deeper look into his tape.

When the Steelers went into sub-packages on defense, similar to the previous times in the season when a cornerback was missing from the lineup, they’d move Cam Sutton inside and have the fourth corner play outside. Due to Joe Haden missing the playoff game for testing positive for COVID, this week’s plan was no different, except instead of seeing Justin Layne take the outside cornerback snaps it was Pierre. The depth chart shuffle was possibly due to Layne showing poor technique and getting burned in Week 17 against the same team.

I can honestly say I did not notice this was occurring until the highlight of Pierre’s night with 11:21 left in the second quarter. It was 3rd & 10 from the Browns’ own 10-yard line. The Steelers were playing a form of cover 3 and the Browns outside receiver runs an out and up. Pierre shows fluid hips transitioning from breaking on the out to flipping and getting vertical. He then stays in phase and plays through the hands of the receiver for the pass break up.

A play this great deserves a second angle, so let’s take a peek at the TV angle as well. Here, you can better see Pierre smoothly flip his hips and feel for the receiver as he begins to look back for the ball. He then begins to lean into the receiver as the ball starts to come down and then is able to make the play.

What I love about the entirety of this rep is simply Pierre not looking the least bit panicked out there. Here he is, pressed into snaps in a wildcard playoff game, and the Browns are testing him on a deep pass on third down. He proved he has the ability and swagger to be up for the challenge. Too often, especially on deep balls, you see young defensive backs panic and do all they can to interfere with the receiver. Not Pierre, great rep through and through.

In the next clip the Browns come out in a trey right formation, which is simply trips to a side except instead of three receivers, you have two receivers and an in-line tight end. Pierre takes the number two receiver to the right as he runs a vertical down the seam and easily covers him, sticking right to his hip.

Here, Pierre is again lined up over the number 2 receiver. He again looks like he’s going to have sticky coverage as the receiver runs a corner route. Watch Pierre’s smooth, quick footwork as the receiver begins to stem outside. It’s intriguing as Pierre’s explosive breaks are often what makes up for his average long speed. However, he bails just as the receiver makes his cut because the Browns quarterback, Baker Mayfield, was able to get the ball out so quickly.

This play, while it may look like a rough off coverage rep, actually shows Pierre’s smarts and understanding of a situation. He’s again lined up on the left side of the defense over the number two receiver. The receiver runs a post and has an easy go at it as Pierre is playing an outside shade.

This takes away any sort of corner route in this situation. Why it’s smart in this situation is because the Steelers are in a form of man defense with both safeties buzzing at the sticks. This means all of Pierre’s help is inside making any sort of inside releasing timing route near impossible with his safety sitting down.

The next clip is a very similar situation for Pierre. This time he’s manned up against the outside receiver. It’s again a post route with the safety buzzing down on his side. He allows the inside release and get’s hands-on. The receiver does get some decent separation at the top of the route, but Mayfield is already scrambling to his left at that point.

While Pierre had some decent reps in this game, outside of his big pass break-up, nothing jumped off the page for me. This isn’t a dig at Pierre as we are only looking at eight defensive snaps. I just want to pull the reins on anyone crowning him as a starter on this defense any time soon. However, depending on how an offseason turns out that includes Mike Hilton and Cam Sutton becoming free agents and a possible cap casualty in Joe Haden, you could see Pierre pressed into a more meaningful role next season.

However, at this point, let’s just appreciate his solid game for what it is. As a whole, Pierre proved to be a great gunner on special teams this year and that alone gives him a great leg up on making the roster again next year. For now, let’s just circle him as a guy to watch in the 2021 training camp and preseason (if we are lucky enough to have one this year).