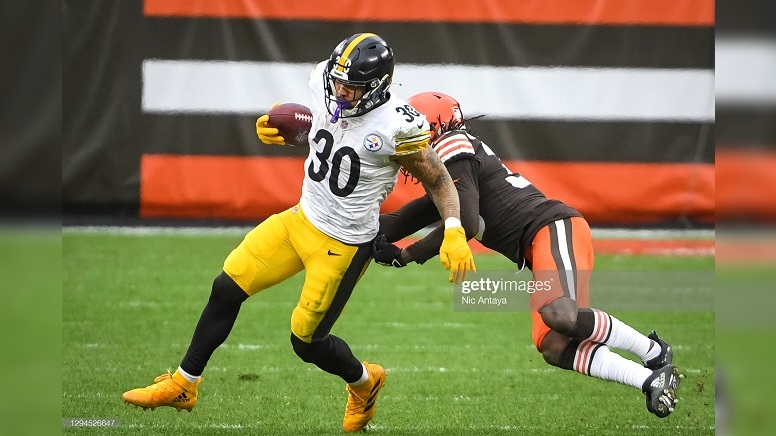 There hasn’t been much positive to talk about when it comes to the Pittsburgh Steelers running game this season and especially since Week 11 when the offense managed to rush for 106 yards in the team’s road win against the Jacksonville Jaguars. Prior to that game, you must go back to the Steelers Week 6 game against the Cleveland Browns to find a collective rushing output that produced over 100 yards. While the Steelers offense did post a nice successful run rate in the team’s Sunday Week 17 road loss to Browns, in total it produced just 84 yards on 19 designed running plays.

On the heels of the Steelers offense registering those 12 successful running plays on 19 designed runs against the Browns this past Sunday, Steelers offensive coordinator Randy Fichtner was asked on Thursday if he thinks the offense was able get some sort of momentum in the running game that might can carry over on the ground Sunday night when the team plays the Browns again Sunday night in Pittsburgh.

“A lot of it is commitment, a lot of it is maybe how the game plays out – circumstance,” Fichtner said. “I do think that structurally, our guys understand them. You come play teams that you know their personnel maybe a little better. You look at guys like [Alejandro Villanueva] going up against 95 [Myles Garrett] and you know they’ve had a lot of time against each other so there’s some familiarity. When it comes to the run game, I think there’s a sense that, “I know where they’re going to be, so maybe I’ll come off a little bit firmer,” and so that might lend to some of that as well.”

Whenever the Steelers offense does run the football Sunday night against the Browns, running back James Conner is likely to get the bulk of the carries. Of his nine total carries that garnered 37 yards against the Browns this past Sunday, six of them can be deemed successful runs.

Conner, for whatever it’s worth, did gain 101 yards and he scored a touchdown on his 20 total carries that he had in the Steelers Week 6 home win against the Browns, which now feels like took place well over a year ago. Additionally, and if you’re looking for something to be optimistic about ahead of Sunday’s game, of Conner’s nine career 100-yard rushing games that he’s registered to date, three of them have come against the Browns. Sunday would be a perfect time for his tenth such 100-yard rushing performance.

As previously mentioned, mentioned the Steelers did have 12 total successful runs this past Sunday against the Browns and backup quarterback Joshua Dobbs had two of them, one of which went for 13 yards, the longest ground gain of the game for the offense. Because of that, a few Steelers players and coaches have been asked all week if there’s a chance that we might see Dobbs once again get limited playing time against the Browns Sunday night at Heinz Field. On Thursday, it was Fichtner’s turn to be asked about Dobbs potentially playing against the Browns and he also left the door open for that to happen.

“There’s always a possibility in COVID-19 times, for sure,” Fichtner said. “We’re blessed to have him [Dobbs] here. It was nice to be able to use him in selected situations, and I thought he did a really nice job. I thought those two [Dobbs and Mason Rudolph] complimented each other really well throughout the game. And both of them really did, they gave us a chance to win the game. And so, I wouldn’t rule out anything.”