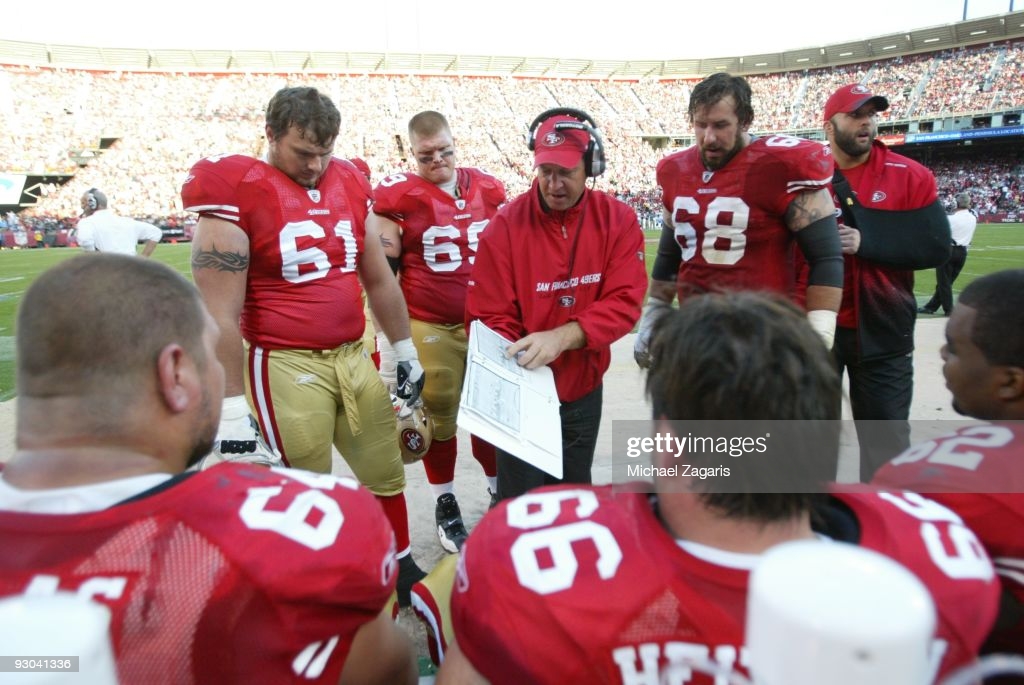 It’s rare to see a Pittsburgh Steelers team, NFL’s model of stability, have so many coaching vacancies at once. But it’s a welcomed, frankly needed, change after another bitterly disappointing season.

A few days ago, we broke down six logical options to be the Steelers’ next offensive coordinator. That job now seems destined to go to Matt Canada. Their next offensive line coach is almost equally as important a hire. Pittsburgh felt the loss of Mike Munchak. Shaun Sarrett had big shoes to fill and we shouldn’t forget Munchak’s running games didn’t always produce good results (24th in YPC in 2018, 25th in 2017) but there was an undeniable dropoff in performance.

So Pittsburgh’s gotta get this hire right. After promoting a relatively green coach like Sarrett, Pittsburgh his first NFL job, they figure to have an eye towards a veteran, proven coach. Dave Bryan penned a great article on why Doug Marrone is a fit. And I agree. San Francisco 49ers’ assistant offensive line coach Chris Foerster also makes a lot of sense.

Foerster was officially promoted to 49ers’ assistant o-line coach before the 2020 season after serving in a consultant role for the previous two years. If you know one thing about the 49ers, you know they run the ball effectively. They’ve boasted strong run games despite a revolving door of injured running backs year after year. Much of that is on Kyle Shanahan and his effective zone schemes and the head o-line coach is John Benton, not Foerster, so to think Foerster is the lone reason for the success would be wrong. But he’s been around a group able to run the football.

Foerster isn’t even 60 but has been coaching the offensive line longer than I’ve been alive. He didn’t have an NFL career (though played in college), and that could hurt him a little bit. Munchak’s Canton resume, though impossible to replicate, provided plenty of credibility in that room. But he’s been coaching offensive lines since 1983. He got his start at his alma mater at Colorado State and made the jump into the NFL with the Minnesota Vikings in 1993, serving as the tight ends coach and assistant o-line coach. His first full-time role came in 1996 with the Tampa Bay Buccaneers. His final season there was Mike Tomlin’s first in Tampa as their DBs coach.

Their paths haven’t directly crossed since. But Tomlin hasn’t forgotten his name. In Foerster’s second stint with the 49ers in 2015 (he’s had three stints there, if you can believe it), Tomlin made sure to shout him out in the week leading up to their meeting.

“We are familiar with Coach (Eric) Mangini (defensive coordinator), although he’s new to his position. We have competed against him in a variety of ways. Chris Foerster, their offensive line coach, has been around. We have competed against him. I think his impact or influence is reflected in their run game. So there is familiarity there. I just think that’s the nature of today’s NFL.”

Pittsburgh went on to win that game in landslide fashion, though the 49ers ran for 111 yards that day.

The Steelers have competed against Foerster-coached teams over the years. That’s to be expected for a coach like Foerster whose been coaching in the NFL for the better part of 30 seasons. However, he was an AFC North foe from 2005-2007, coaching the Baltimore Ravens’ o-line. He worked with Jonathan Ogden for all three seasons. In his final year, the team drafted Ben Grubbs and Marshal Yanda. Both would go on to be excellent players, especially Yanda, who could end up in Canton someday.

Foerster’s best job may have come with Washington. In 2012, they were 2nd in the league in rushing and top three in every category. They had similar results the following season even as their record tanked to 3-13. There, he helped develop Trent Williams into a Pro Bowl tackle and the start of an awfully successful career. He’s worked with a long line of great left tackles: Ogden, Williams, and he coached the 49ers’ Joe Staley for his second and third years in 2008 and 2009. For what it’s worth, Pittsburgh’s likely to have a hole there after Alejandro Villanueva leaves in free agency. Odds are good they’ll draft a rookie to fill that spot.

Unfortunately, Foerster’s infamously known for how his time in Miami – he was their line coach in 2016 and 2017 – ended. A viral video showed Foerster snorting a white powder. He quickly resigned and checked into rehab. In January of 2018, he spoke to NFL.com about his recovery.

Several players and coaches stood by him. Months after Foerster resigned, Dolphins’ center Mike Pouncey said he still kept in touch with him. He called their relationship “awesome” and praised his coaching IQ.

“I still talk to him every day now. Just to see him get through this process. A lot of guys turn theirs backs on him. For me, I’m just not like that. I’m a loyal guy. I think if a guy has a problem, I want to help him get through it.”

He spent two months in rehab, another 90 days in an outpatient program, and attended a daily, 12-step program for at least two years.

And according to that NFL.com article, Foerster’s maintained a close relationship with Tony Dungy, who hired him in Tampa Bay and Indianapolis. Dungy and Tomlin are clearly still close so if Tomlin needed a reference, Dungy would be the man to talk to.

But the most important piece of information of Foerster’s recovery is his present day resume. Kyle Shanahan and the 49ers were careful easing him back to football. He served as a consultant role for two seasons, not meeting in-person with the team. They obviously were encouraged by the job he did to make him an official hire for this season. Shanahan said he was proud to give Foerster a second chance.

His past is obviously full of skeletons, and you absolutely can’t downplay that, but what matters most is the present. And the evidence from afar is that Foerster has changed his life. All those things would have to continue to be vetted in a hypothetical interview process, especially if he gets put in charge of his first group since his addiction was made public. If there’s anything in the interview process that gives Tomlin pause, he shouldn’t make the hire.

Honestly, and this should be obvious, I don’t know who the Steelers are going to hire. Foerster is one name of a million candidates we could toss out. LSU’s James Cregg would be a worthy suggestion too. But I do think the Steelers go with a veteran coach. They need to make the perfect hire to jumpstart this o-line winning at the line of scrimmage and reviving a run game that was as bad as its been in 2020.