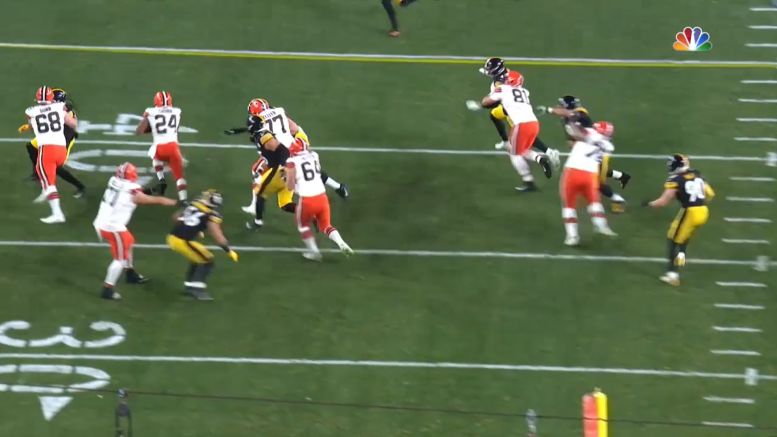 For as much as the Pittsburgh Steelers offense and quarterback Ben Roethlisberger are in the crosshairs right now, the reality is that the bigger problem on the night, at least in my opinion, is the fact that the defense failed in virtually every area.

The offense didn’t help by spotting the Cleveland Browns five turnovers, including one for a direct touchdown, and some short fields that led to points, but the fact of the matter is that the defense played uniformly awful, uncharacteristic football that kept putting the score out of reach whenever the offense got close.

The defense allowed the Browns offense got get into the end zone three times in the first quarter alone, not even including the defensive touchdown scored. Two of them were on short drives (one starting on the Steelers’ 15-yard line), but part of being a great unit is having a strong quick-change defense that can respond to turnovers and hold offenses to field goals. They completely failed that.

“Question is, what went right?”, defensive captain Cameron Heyward said last night when pried for answers as to what went wrong. “We didn’t stop the run early. We didn’t execute. And then the quick passing really got the best of us and yards after catch. Our tackling was poor. And we didn’t — we didn’t give up field goals. Even when we did turn the ball over, we still had a chance to fight, but it all was terrible tonight”.

The Browns rushed for 132 yards on 28 carries on the night, averaging more than 4.7 yards per carry, with Kareem Hunt scoring on the ground twice. Nick Chubb had success on the ground and in the air, and Jarvis Landry had nearly 100 yards, with a 40-yard touchdown. Baker Mayfield threw for 263 yards and three scores with no turnovers.

“We got beat. Didn’t stop the run. Didn’t execute. You guys don’t know our defense, but when we don’t execute at a high level, that’s what’s going to happen”, Heyward said. “We preach execution. And when we do it, you know, good results and when we don’t it puts the defense at risk. You know, we never got a rhythm. You can point to the second half. We got a couple, you know, three-and-outs. We got off the field but we were on our heels the entire game”.

That’s what happens when you’re trailing by 28 points in the first 15 minutes, of course, but the defense failed to get a single takeaway, barely even making any plays on the ball, and outside of a couple of plays, the pass rush, which was the best in the league, was non-existent, despite the Browns being down multiple starters along the offensive line.

Plain and simply, it was an embarrassing performance for a unit that has a lot more talent than what was on display last night for the final game in Heinz Field of the 2020 season. And one has to wonder how many of those players won’t be back for 2021.