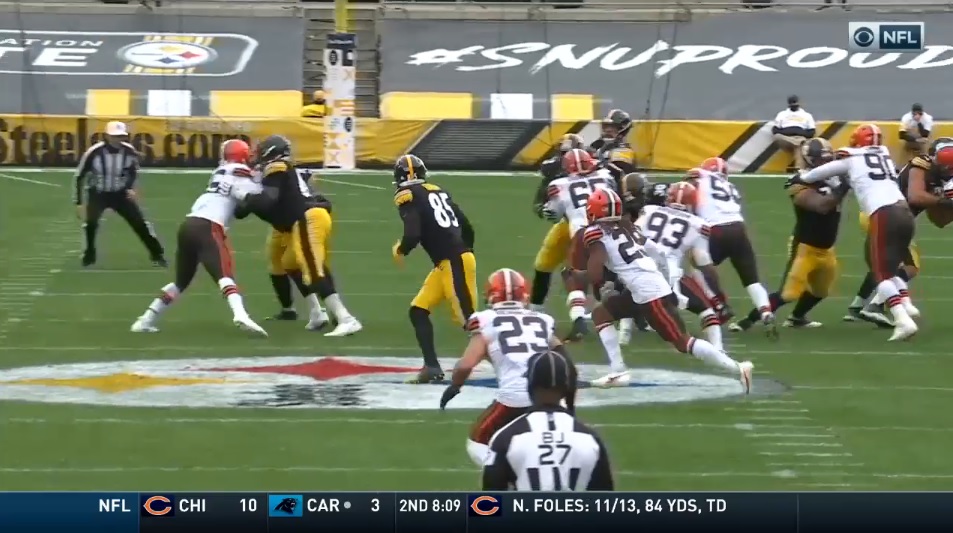 As we’ll do every week to get you ready for the upcoming game, our X Factor of the week. Sometimes it’s a player, unit, concept, or scheme. Our X Factor for tomorrow game against the Indianapolis Colts.

X Factor: Attacking The Middle Of The Field

It’s been difficult to determine why the Pittsburgh Steelers haven’t attacked the intermediate and deep middle of the field this season. Objectively, they haven’t. Just check out Ben Roethlisberger’s pass chart from the Bengals’ loss.

Not much happening between the numbers (and the times he tried didn’t end in positive results). And that isn’t a one-off thing. It’s been the theme of the season.

Why has this real estate been visited so infrequently? Could it be dictated by coverage? Single high safeties, middle of field closed (MOFC) reads, means you generally don’t throw the ball in that direction. Seeing eight man boxes to stop quick passes creates plenty of single high coverage, which opens things up outside the numbers. Take Ben Roethlisberger’s hospital ball to Eric Ebron against Cincinnati. Why did Roethlisberger throw the corner route to Ebron instead of the post to Claypool? MOFC read, FS Jessie Bates sitting in centerfield. Roethlisberger confirmed as much after the game.

“The deep one to Ebron the same thing happened,” Roethlisberger said. “If you go back and look at it, 30  who is a ballhawk of a safety—he’s a guy who takes chances and does stuff. He’s on Chase until he sees the ball come out of my hand. Chase thought he was open, but when you go back and look at it, you realize the guy was back there to make a play. Could you throw it up and it be 2-on-1 and maybe your guy makes a play? Yeah. You have to take the kind of smart throw there, which I thought was a good one, but looking back at it, you have to realize there, guys come open once the balls come out of your hand a lot.”

The Colts are a little different. Though Tony Dungy is long gone as head coach, DC Matt Eberflus runs as much Tampa 2 as anyone in football. Two deep shell with the MIKE linebacker getting depth and asked to carry #3 vertically (his assignment is to open his hips to the field/strength and carry any slot route up the field).

Those create plenty of middle of field open (MOFO) reads for Roethlisberger to hit downfield. And maybe that’s better for the deep ball. Passes travel less distance when they’re thrown in the middle of the field than they are on an angle to the sideline. And there’s a little more margin for error here too. The sideline isn’t working against the QB and receiver as leverage.

So tomorrow, I’m hoping Roethlisberger can hit some chunk plays between the numbers to JuJu Smith-Schuster and Eric Ebron. Ebron should be playing this game with a chip on his shoulder, spurned by his former team. Colts’ fans didn’t exactly love him after rumors over his ankle injury. And Smith-Schuster needs to run a different route tree, something that allows him to make more plays downfield. He’ll draw a tough matchup in slot corner Kenny Moore but Smith-Schuster can’t be asked to run five yard choice routes all game.

If there’s a game to attack the middle of the field from 10+ yards, this is it. It’ll inject some life into the passing game and juice into the offense.