The Pittsburgh Steelers had two notable transactions earlier in the day as running back James Conner was activated off the team’s Reserve/COVID-19 list and outside linebacker Cassius Marsh was signed off the Indianapolis Colts practice squad. Those two moves, however, have yet to impact the team’s active 53-man roster as the Steelers were issued roster exemptions for each Wednesday afternoon. 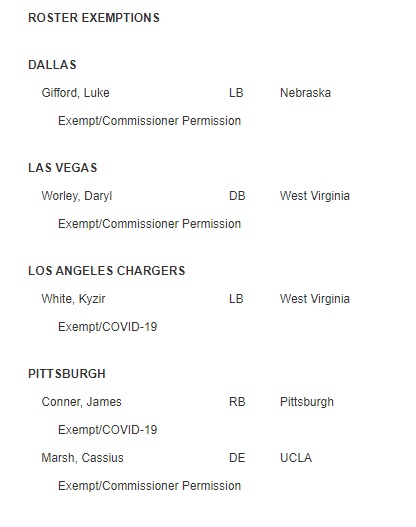 In summation, the Steelers roster currently sits at 52 active players following the Tuesday elevation reversions of kicker Mathew Wright and tackle Anthony Coyle, both of whom dressed for the Monday night game against the Washington Football Team.

Conner’s roster exemption should only last for a few days and when it expires, he’ll make the active roster grow to 53, the limit. As for Marsh, his exemption is likely to last several days and might not ultimately expire until Monday because him having to go through COVID-19 protocols. We saw linebacker Avery Williamson go through the same switching-of-team protocols several weeks ago after the Steelers acquired him in a trade with the New York Jets.

Basically, Marsh isn’t likely to have cleared COVID-19 protocols by Sunday, so he likely won’t count against the 53-man roster until Monday or Tuesday of next week. Once Marsh’s roster exemption ends, the Steelers will obviously need to make a corresponding roster move.

As of Wednesday evening, center Maurkice Pouncey is the only player on the Steelers Reserve/COVID-19 list. The hope seems to be that he’ll be activated off the list ahead of Sunday’s road game against the Buffalo Bills. If activated off the list in a few days, the Steelers might get a roster exemption for him that last a day or two. Such an exemption, however, would need to expire before the Sunday night game against the Bills if Pouncey wants to play in that contest.