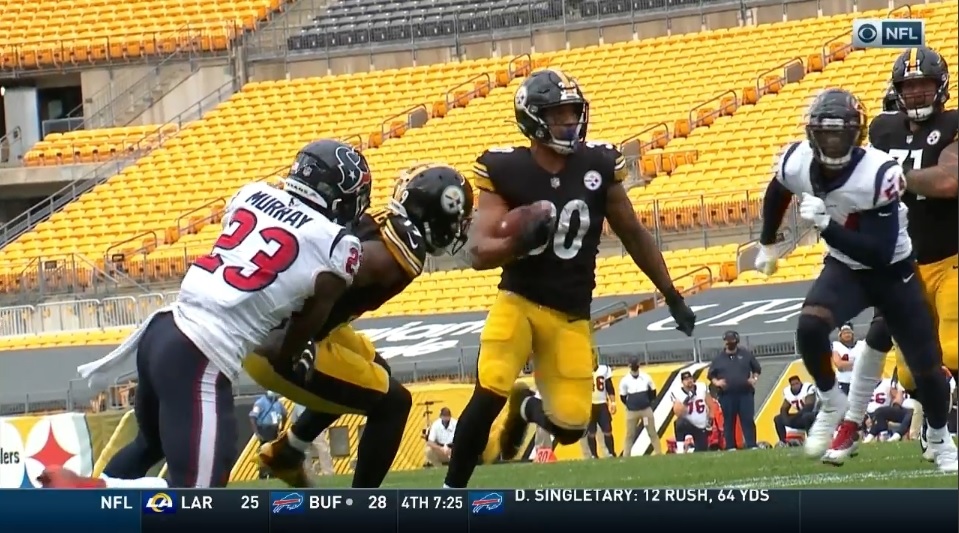 The Pittsburgh Steelers have made two roster moves Wednesday morning. The team announced they activated RB James Conner from the Reserve/COVID list and signed EDGE rusher Cassius Marsh off the Indianapolis Colts’ practice squad. They also announced LB Ulysees Gilbert III would return to practice, opening up the 21 day window to activate him off injured reserve.

We have activated RB James Conner from the Reserve/COVID-19 List & signed DE Cassius Marsh from the Colts practice squad.

Conner was placed on the team’s Reserve/COVID November 28th after he reportedly tested positive for the virus. He missed two games. Wednesday’s win over Baltimore and Sunday’s loss to Washington. The run game has struggled even more without him, bottoming out to a 21 yard, 1.5 per carry performance against Washington. He should start against the Buffalo Bills Sunday night.

Marsh is a seven year veteran who has appeared in 91 career games. A 4th round pick out of UCLA by the Seattle Seahawks in 2014, he has 14 career sacks. In 2018 with the San Francisco 49ers, he registered a career high 5.5 of them across 16 games and three starts. He’s played in three games with the Colts this year, recording five tackles. Marsh began the year with the Jacksonville Jaguars but was released in mid-October. He’ll add pass rush depth following Bud Dupree’s season-ending ACL tear.

Marsh will need several days to clear COVID protocol before joining the Steelers. With a short week, he may not suit up Sunday night against the Buffalo Bills.

Cassius Marsh will need to go through COVID protocol I am pretty sure so I am not sure he will have enough time to be ready for Sunday night. Interesting to see if the Steelers get a roster exemption for him until Monday. #Steelers

Gilbert was placed on IR on November 4th due to a back injury. He missed the back half of his rookie year with a back injury. The team has three weeks to activate him from IR or keep him on there for the rest of the season. His possible availability comes at a good time after Robert Spillane suffered a knee injury against Washington. Spillane is expected to miss at least Sunday’s game against the Buffalo Bills. Should he sit out, Avery Williamson will start with virtually no ILB depth behind him.