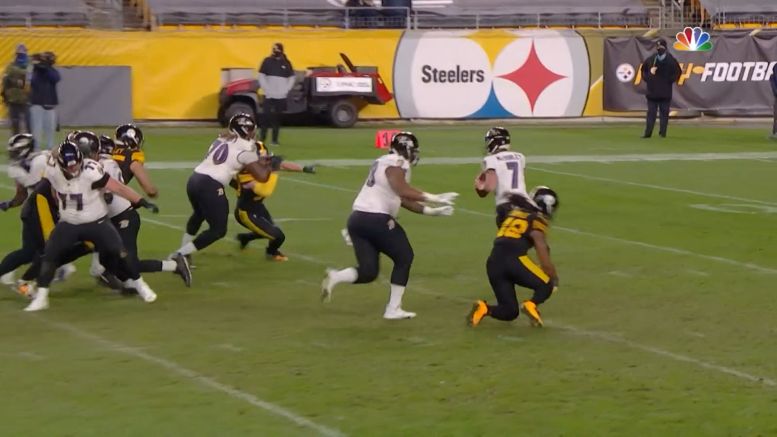 The Pittsburgh Steelers escaped Week 12 with a close home win over the Baltimore Ravens but in the process the team may have lost one of their starting outside linebackers in Bud Dupree for an extended amount of time.

Dupree seemingly suffered a serious knee injury in the fourth quarter of the Wednesday game against the Ravens and while he was able to get off the field on his own, he immediately went to the locker room and did not return.

Steelers head coach Mike Tomlin did not provide much of an update on Dupree after the game was over with.

“Bud got hurt, he’s being evaluated,” Tomlin said. “I’m sure I’ll have an update for you tomorrow or whatever when we get an opportunity to meet.”

Dupree’s knee gave way during a pass rush and while on the ground he slammed his arms on the turf in disgust.

We’ll obviously be monitoring Dupree’s situation the rest of the night. Our own Dr. Melanie Friedlander, however, fears the worse after watching video of the Dupree injury.

UPDATE: Mike Garafolo reports that initial tests on Dupree indicate a torn ACL. He says tests coming to confirm but the team expects him to be lost for the reason.

Dupree was having such a great season in 2020 after getting the franchise tag earlier in the offseason. The Steelers former first-round draft pick out of Kentucky entered the Wednesday game against the Ravens with 8 total sacks.

With Dupree sidelined, the Steelers will turn to rookie Alex Highsmith and Ola Adeniyi to play opposite T.J. Watt. The team also has outside linebacker Jayrone Elliott currently on the 53-man roster.

Initial tests on #Steelers LB Bud Dupree indicate a torn ACL, sources tell me and @AKinkhabwala. Tests coming to confirm but the team expects him to be lost for the reason. Crushing for the team and Dupree, who is playing on the franchise tag and is slated to be a free agent.

For all those who have asked…

I hate to say this but yes, I do think Bud Dupree tore his ACL.

Brutal if true and I hope I'm wrong.