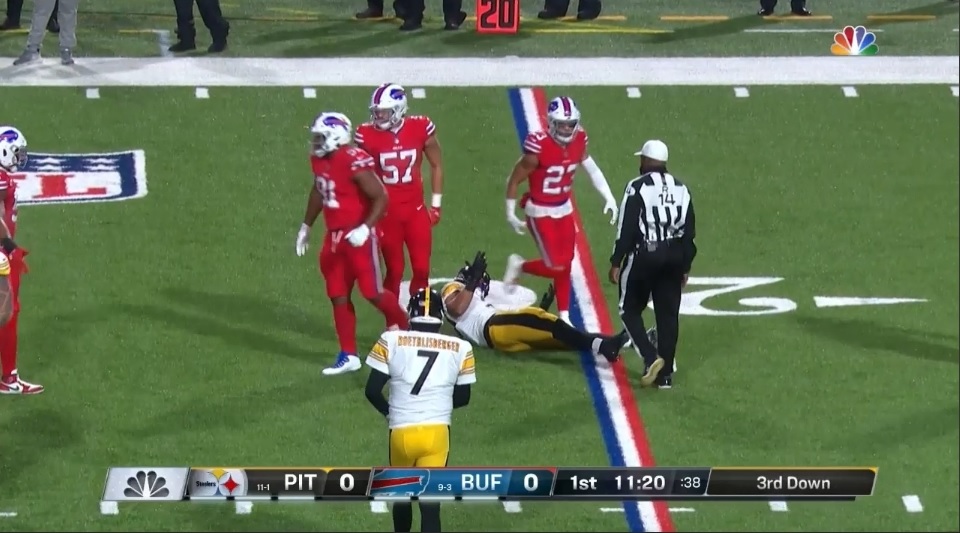 Getting into some stats of the weird to make us all feel better about last night’s loss.

– Let’s start with the odd-ball score. 26-15 win for the Buffalo Bills. Since 1940, this is just the eighth 26-15 game in NFL history. It’s the first such score Pittsburgh’s ever been involved with.

The last 26-15 game the NFL saw? Last season. Guess who won that game? The Buffalo Bills, who defeated the Dallas Cowboys 26-15 on November 28th. Stat more for the Bills crowd than Steelers’ Nation, I know, but still interesting and definitely weird.

– He was sacked tonight for the first time since Week 8. A span of 275 pass attempts, the second longest streak since the merger in league history. Looking forward to finally writing a sack breakdown later this week.

– Pittsburgh ran for just 47 yards Sunday night. That marks the fifth time this season they’ve been held under 50 in a game. First time that’s happened in franchise history. Bunch of years with four games of fewer than 50 yards. Never five. And still three games to play.

– With three drops Sunday (two by Diontae Johnson, one by Eric Ebron) the Steelers have now dropped 17 passes over their last three games.

Still, with six catches for 55 yards, he’s only gone over ten yards per reception in three games this year. Only once since Week 4 (the Dallas game).

– The Steelers are on pace to punt 76 times this season. That’s more than last year, when their terrible offense still only punted the ball 69 times.

– Bit of an extra odd-ball stat. The Steelers have now allowed two receivers this season to record a 10+ catch, 130+ yards, 1+ TD performance. The Eagles’ Travis Fulgham and Sunday night, the Bills’ Stefon Diggs. First time they’ve given up two of those games since 1995 when the Lions’ Herman Moore (10/131/1) and Packers’ Robert Brooks (11/137/1) did it to Pittsburgh. Good news – at least they went to the Super Bowl that year (and then Neil O’Donnell happened). Hope they can repeat the trip this year.

– Final one. Pittsburgh was brutal on third down against the Bills. Just 1/10. They haven’t been that bad in games with 10+ attempts since 2008, when they went 1/10 in a game against the New York Giants (the James Harrison long snapper game).