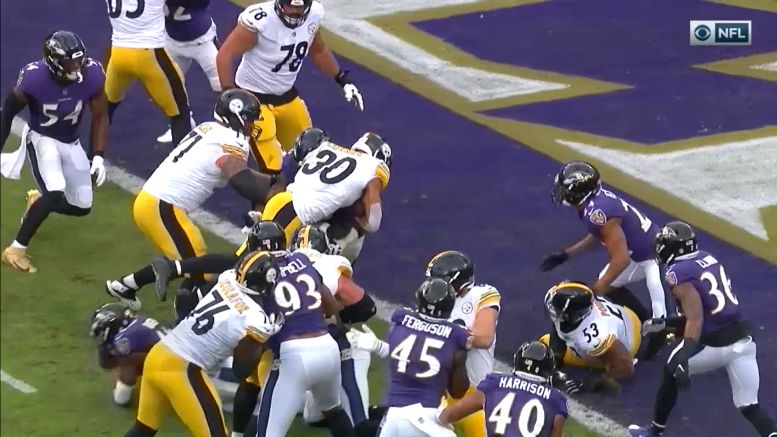 Somehow, some way, we have finally reached game day. At least, the game is still scheduled to be played as I write this. Who knows what will happen between now and then. Reportedly, the Baltimore Ravens learned of a new player positive test for Geno Stone as they were boarding the plane yesterday, so, yeah, that was fun.

It’s been quite a journey to get here, but we do finally have a game to talk about, so I don’t have to keep writing articles that break down the nuances of the Covid-19 protocols, which, frequently enough, don’t even seem to jive with the way that the national media is reporting that it’s supposed to work.

But I digress. It’s on to the game.

While the focus might be on the Baltimore Ravens’ run game, I’m starting with the Pittsburgh Steelers’ run game. Even without James Conner to lead the way, the Ravens are depleted up front, with both Calais Campbell and Brandon Williams out.

The Ravens have allowed 173 yards on the ground in back to back weeks in losses, with those two out (Williams was injured in the first game). To add on to that, Justin Madubuike, who has played about half the team’s snaps the past two games, is also unavailable.

Excluding their edge defenders, such as Yannick Ngakoue, the Ravens only have three defensive linemen on their 53-man roster: Derek Wolfe, their only starter; Justin Ellis, their number two defensive tackle; and Broderick Washington, who has seen extended playing time recently due to injuries.

Even on the edge, Baltimore is majorly hampered, as Matt Judon and Pernell McPhee will both miss the game after testing positive for the coronavirus. Ngakoue is their number one for the game, with Tyus Bowser and Jaylon Ferguson—recently activated from the Reserve/Covid-19 List himself—tasked with shouldering the load.

Being without Conner is certainly not going to make this game any easier, and truth be told, Benny Snell hasn’t exactly looked like a featured back since he did admittedly run well against the New York Giants in the season opener, spelling an injured Conner.

But this is a depleted front that will be playing without having had a proper practice in a week and a half. They had a socially-distanced walkthrough in masks for the past two days. Will the physicality of the game catch them vulnerable?

We should also expect to see Anthony McFarland get some work today, and likely, the season debut of Wendell Smallwood, who has been on the practice squad all year and, during most weeks, has been one of the four players the Steelers have chosen to protect.

Head coach Mike Tomlin said prior to the last game that they have devoted time to correcting the running game after hitting a lull. We saw improvement the last time out. If they can continue to show progress without Conner, even given the state of their opponent, it might be something of a nice consolation prize for the delay.