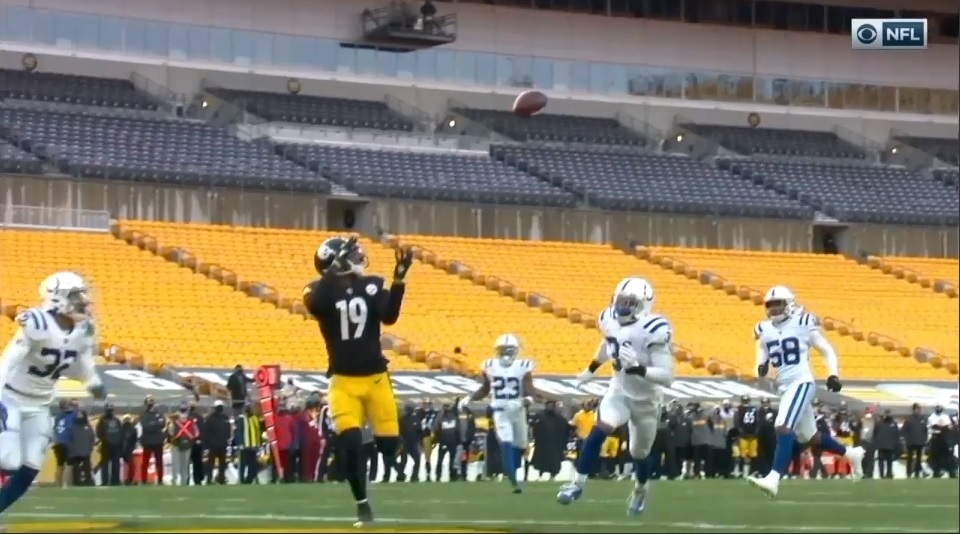 I hate to use the old sport writers’ cliché here, but Sunday’s dramatic comeback win was a tale of two halves for the Pittsburgh Steelers against the Indianapolis Colts at Heinz Field.

For the first time in the Mike Tomlin era, the Steelers came back from a 17+ point deficit in the second half to pick up the 28-24 win, clinching the AFC North Division Title in the process.

In the first half, that was a pipe dream as the Steelers looked asleep at the wheel again, allowing the Colts to jump out to a 21-7 lead at the half. The start of the second half was much the same as the Colts drove for a field goal, but from there it was all Pittsburgh as Ben Roethlisberger looked like early-season Ben, leading the Steelers to the comeback.

At 12-3, the Steelers now find themselves in the enviable position to sit key starters in a meaningless Week 17 game on the road against the Cleveland Browns.

It feels so great to write about a win. Let’s get to the grades.

First half, Roethlisberger was pretty poor. The second half though, whew. Turn back the clock, 7!

Roethlisberger, who has seemingly always toyed with the Colts, started to do just that in the second half, carving up Indianapolis, throwing three touchdowns in the second half to lead the miraculous comeback.

Ben started to push the football downfield, hit some shots in the intermediate area of the field – especially between the numbers – and really got the offense going. It was great to see. This should propel them forward – from a confidence standpoint – offensively, especially 7. We know he can hit those shots now, so there’s no excuses moving forward.

On the ground, the Steelers were mostly terrible. Benny Snell Jr. took a step back from his Week 15 performance, and the return of James Conner didn’t quite spark the run game.

That said, when the Steelers went into pistol, they were able to get some sort of downhill action going in the second half, with Conner ripping off a nice 12-yard run that had a cutback built into it.

The real impact was in the passing game, where Conner really provided a key checkdown element for Roethlisberger. He brought some shiftiness to the role again and finished with five catches for 45 yards, hauling in every target he saw on the day.

Conner was also strong in pass protection, picking up a few blitzes to give Roethlisberger time down the field, which opened things up for the offense.

As for Snell, a lot of his issues were the guys up front not getting much of a push at all, but he has to be able to fall forward consistently, and that didn’t happen Sunday, especially in short-yardage.

That second half was quite the performance from the receivers, specifically JuJu Smith-Schuster and Diontae Johnson.

Johnson made an unreal diving grab on his 39-yard touchdown to make it a two score game, and JSS made a tough combat catch in the end zone for the go-ahead score.

Overall, the duo combined for 17 catches for 171 yards and two touchdowns. That’s quite the performance overall. Smith-Schuster started to really get going in the second half, looking like the JSS of old, and Diontae really started to put the fear of God in the Colts’ secondary.

Chase Claypool carried the Steelers on the drive in which they came up empty on, but he has to make that catch on third down in traffic for the score. It was right on the money.

There’s still some drop issues here with this group, but they showed up when the lights were the brightest in the second half.

Eric Ebron had a decent game against his old team overall, but he left some plays on the field. His third-down play in the back of the end zone on the drive in which the Steelers came up empty could have haunted his day overall. That would have been a tough catch through contact, but that’s what he’s paid to do.

He also had what could have been a drive killing false start to push the Steelers into second and 15, but Roethlisberger bailed them out of that mistake. Overall though, Ebron was decent, finishing with five catches for 47 yards and a score. His touchdown was impressive, which him fighting through the tackle attempt to roll into the end zone, making it a three-point game.

Vance McDonald added one catch for 5 yards and wasn’t used much as a blocker, which is disappointing considering the success Pittsburgh had last week on the ground with McDonald as the first-team tight end.

One week after Roethlisberger was under barrage in the backfield, the Steelers’ OL held up well in protection on Sunday, allowing just one sack and two quarterback hits in the win.

The real issue remains the embarrassing lack of push in the run game. Alejandro Villanueva struggled to gain any traction against Justin Houston, while Maurkice Pouncey couldn’t get much going against Grover Stewart. I thought Kevin Dotson and David Decastro held up really well against DeForest Buckner (two tackles and a pass deflection), but overall the line didn’t get any push. It was ugly in short yardage. They have to be able to run the ball this late in December and into the playoffs and they just can’t on a consistent push.

I didn’t like what I saw early from the defensive line, but in the second half guys like Cam Heyward and Stephon Tuitt turned up the heat and really started to get after Phillip Rivers and the Colts’ running backs.

Heyward had a huge second-half sack on Rivers, and Tuitt really set the edge well against the run, turning guys like Jonathan Taylor and Nyheim Hines back inside to teammates. Tyson Alualu flashed a bit in the second half as well, but I wonder how much his knee is bothering him. He looks hobbled.

It helped having Vince Williams back in the fold, no doubt. VW finished with five stops and created a bunch of pressure as a blitzer. He brought much-needed energy to the field as well, which had to help the Steelers overall.

Outside, the pairing of TJ Watt and Alex Highsmith looks special long-term.

Highsmith was nearly unblockable in the second half, living in the backfield. His inside spin move on the Colts’ left tackle on the fourth down stop looked like Dwight Freeney. What an unbelievable rush for the rookie. He played the run well too, finishing with eight stops. His two quarterback hits tied Tuitt for the team lead on Sunday. Highsmith’s rush also led to Mike Hilton’s interception of Rivers.

Speaking of Watt, he was phenomenal. The star linebacker recorded two sacks, a quarterback hit, and a tackle for loss in a win in which the Colts threw everything possible at him to help right tackle Chaz Green. Watt was more than up to the task, forcing a fumble on one of his two sacks.

Cassius Marsh was the third linebacker on the field on Sunday. I wasn’t too pleased with him on the defensive side of things, but he gave them passable snaps there to give Highsmith and Watt a blow. He was bowled over a couple of times against the run and didn’t generate much of a rush on Sunday. He’s a veteran though and knows how to get after the quarterback. I’m not too worried there.

It wasn’t a terrible day for the Steelers’ secondary, but it wasn’t good either.

Steven Nelson had a really rough game, getting called for pass interference on a play that should have ended the game. He also had a rough time covering TY Hilton on the left sideline, falling down twice on two big plays by Hilton.

Joe Haden was burnt on Zach Pascal’s 42-yard touchdown. Pascal just ran away from the veteran Haden, which is never a good sign for an aging cornerback.

Aside from the two starters, I thought Cam Sutton and Mike Hilton were solid overall. Hilton had a hand in two turnovers, recovering a Rivers fumbled and picking off an overthrow from the veteran. Hilton is going to get PAID in the off-season from a slot-corner needy team.

At safety, I thought Minkah Fitzpatrick and Terrell Edmunds were solid on the day. Edmunds should have had another interception, making a great read on Rivers in the end zone to sky for a ball intended for Jack Doyle. Doyle did a great job ripping it out though. Edmunds also did a tremendous job getting underneath the third-down shot to Hilton late in the game down the middle, forcing the incomplete pass.

Fitzpatrick should have had an interception on a Cover 1 Robber play where he jumped a route for Michael Pittman Jr. Fitzpatrick finished with eight stops in the game and did a nice job coming downhill in run support throughout the afternoon.

Let’s start with the positives: Matthew Wright again did a nice job filling in for Chris Boswell, drilling all four extra points. Jordan Berry also did a nice job punting the heck out of the football again, averaging 48 yards per punt, pinning the Colts inside the 20 three times.

Aside from that, too many penalties on returns, poor coverage on punts and just lackluster performances all around.

Ray-Ray McCloud did a nice job forcing some missed tackles on kick returns, and had a nice 8-yard return that set up Johnson’s 39-yard touchdown, but he nearly coughed up the football on that return.

Punt coverage was a disaster for the Steelers. Nyheim Hines had a ton of running room every time he caught the football. I don’t think it was a case of Berry outkicking his coverage, I just think the coverage unit was slow to get down the field and then didn’t tackle well when they arrived. Hines averaged an absurd 21 yards per punt return Sunday. That’s not going to get it done.