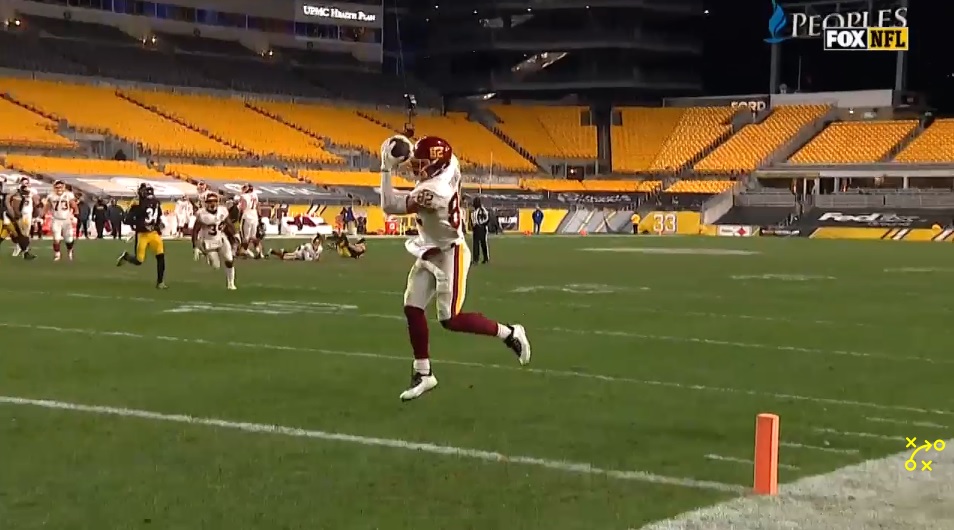 Well, that was bound to happen.

Dropped passes, bizarre short-yardage calls, legitimately zero push in the run game from the offensive line, and a late collapse by a usually dominant defense led to a disappointing 23-17 loss by the Pittsburgh Steelers to the visiting Washington Football Team at Heinz Field Monday night.

For the second game in a row the Steelers dropped at least seven passes, while the run game continues to be a serious problem. Add in the Football Team’s ability to get their hands up and bat down short throws, and, well, that’s the recipe for disaster for the Steelers right now.

Hopefully this loss is a major wakeup call, because it’s tough to feel good about the direction of this team right now in the last few weeks. Sure, 11-1 and in the driver’s seat for the division crown looks great on paper, but right now it doesn’t feel great.

This team has issues that are rearing their ugly heads. Hopefully some normalcy of playing on a Sunday night next week helps correct some things.

For the second week in a row, drops put a damper on the night Ben Roethlisberger had.

Yes, he’s Mr. Dink and Dunk at this point (where is the intermediate level route concepts and throws?), but he’s most efficient and drives the Steelers down the field.

That batted pass and interception to end the game really hurt though, obviously. Teams are starting to bat more and more passes because they know the ball is coming out hot. Pittsburgh has to switch it up and start throwing further down the field with some consistency.

With that said, I thought we saw some vintage Ben Monday night, extending the play, throwing darts on the run, and even making a free blitzer miss with a nice spin move to avoid the sack.

He also fired an absolute laser to Diontae Johnson for a touchdown, and threw a nice hole shot to James Washington early in the game. The arm is fine. Now he needs to start airing it out a bit more to back defenders off.

I’m not sure what more to say at this point. This run game is bad, and the backs are doing the offense no real favors at this point on the ground.

Benny Snell looked heavy and slow on Monday, and Anthony McFarland again looked like the game was too fast and he wasn’t seeing things clearly. A lot of the run game issues are due to a lack of push up front, but these backs struggle to gain a darn yard.

Jaylen Samuels looked like the best RB on the field in black and gold Monday, and that should tell you all you need to know. Samuels really created some things on his two receptions, showing some wiggle and burst. It was stunning.

The decision to throw to McFarland on 4th and 1 has my stomach hurting.

It doesn’t get better here, and likely won’t until we turn to the defense.

Drops, drops, drops galore. For all of his electrifying talent, Johnson has the yips at this point. That’s 6 drops in two weeks, from my count. Simply not good enough.

Sure, he’s targeted a ton, but he can’t be counted on to make the simple catches at this point. It’s infuriating. Hit the jugs machine, please.

JuJu Smith-Schuster had a big drop early in the game and had a third down throw late skim off his left hand in tight coverage. It was frustrating to see JSS relegated to essentially a checkdown option over the middle Monday. Puzzling route concepts and play calls.

Chase Claypool made some tough catches in traffic Monday, but again couldn’t corral a deep ball late. He’s been fine at receiver, but can we see a jet sweep again? My goodness, teams aren’t even worried about it at this point because the Steelers keep showing it and won’t hand it off.

James Washington was awesome again on Monday. I’d start playing him more, especially when you’re not really worried about drops with him. That 50-yard catch and run for a score was quite fun, especially with him breaking two tackles in the process. Here’s hoping 13 is on the field more moving forward.

Ebron, much like Johnson, has the yips at this point. He’s overthinking things. I counted three drops on Monday night, marking 5 in the last two games. Yuck.

When he does make catches, he makes things happen, hauling in seven balls for 68 yards on the night. He’s a solid middle of the field option and makes the contest catches. Like Johnson, it’s the simple ones he has trouble with.

I’ve also seen enough of Vance McDonald on the field as a blocker. He’s not getting any push, makes very little impact in the run game, and just isn’t a receiving threat. 12 Personnel just isn’t working.

Yes, the OL hasn’t allowed a sack of Roethlisberger in what feels like an eternity, but aside from pass protection, this offensive line feels soft and in need of a serious infusion of youth.

Alejandro Villanueva and Chukwuma Okorafor feel like the only solid pieces on this OL at the moment, which is painful to write considering David Decastro is in the lineup.

Matt Feiler simply isn’t making any sort of impact in the run game, and JC Hassenauer has shown what he is: a depth piece that is break-glass-in-case-of-emergency. That snap that went errant was one of the worst snaps I’ve seen from a center in the NFL in a long time. Not even close to Roethlisberger.

If there was an indictment on the outlook of the offensive line at this point, it was the goal line stand by WFT. Yes, they have a great front seven, but the OL couldn’t get any push in short yardage all night, none worse than six inches from the goal line.

Tuitt recorded a sack, Heyward batted down a pass, and Alualu led the way with four run stops in the loss.

This group got good push up front rushing the passer and really shut down the run game overall, forcing WFT to become one dimensional.

TJ Watt is an absolute game wrecker, but everybody already knows that. Recovering fumbles he forces though…that’s an area of improvement. I have no idea how Watt didn’t come up with that football.

Aside from that error, Watt dominated, recording two sacks, forcing said fumble, batting down two passes and hitting Alex Smith four times. His holding call on goal to go gave WFT a new set of downs and led to a touchdown though, which really hurt.

Opposite Watt, rookie Alex Highsmith was mostly quiet in his first career start, but when you look at the stats sheet, he put up a silent five tackles. He had some good pass rush reps and played the run well, which is something he’s done all year. I’m excited to see what he does in his second career start.

Inside, let’s hope Robert Spillane is alright. That knee injury looked ugly though. Prior to that, Bob was all over the place, sacking Smith on a delayed blitz, breaking up a pass and flying downhill against the run.

Avery Williamson came on in place of Spillane and started racking up tackles, but his miscommunication with Vince Williams on Logan Thomas’ 15-yard touchdown was painful to watch. There’s no way that’s on Williams, who had to come across the formation to take Thomas on the wheel route. If that ends up being the case, that’s terrible design by Keith Butler. Williamson should have passed off Steven Sims Jr. on the crossing route to Williams and taken Thomas. I can’t wait to see the All-22 there.

The diminutive slot corner gave WFT fits on Monday, finishing with six tackles, making plays behind the line of scrimmage, and breaking up a pass down the field. It’s great to have him back to full health because he can really change the game near the LOS.

Joe Haden looked really solid on Monday, aside from a missed tackle. He broke up a pass in the end zone and really looked strong in coverage. Let’s hope he’s alright after leaving the game with an injury.

Cam Sutton started in place of Steven Nelson and put some good football on tape, driving downhill to break up a pass. He also played the throw to Thomas down the left sideline well until the catch point, timing his jump just early, missing the football my the slimmest of margins.

Justin Layne looked passive on Monday, missing a couple of tackles in space, and rarely driving on the football in coverage. That’s something to monitor moving forward if Haden’s injury keeps him out.

At safety, Terrell Edmunds bounced back slightly, but he was a bit overaggressive driving downhill on the ball on short throws. He also missed a tackle on Antonio Gibson early.

Minkah Fitzpatrick looked solid too, coming up with some big sticks in space and breaking up a pass.

Hats off to Matthew Wright for stepping in in a pinch for the injured Chris Boswell. He doesn’t have the strongest leg, but he drilled both extra points and split the uprights on his 37-yard field goal. I thought he did well on kickoffs too, for the most part.

Once again though, the kick coverage team just isn’t up to snuff. There’s no way Danny Johnson should reel off a 30-yard kick return against the Steelers. He did though, setting WFT nicely.

The issue I have on punts though was the punt return team. Again, Ray-Ray McCloud coughed up the football. Hats off to Sean Davis for wrestling the ball away at the bottom of that pile though. Ray-Ray has to have better awareness there. When he wasn’t fair catching punts, he had some costly decisions to let the ball bounce, pinning the Steelers back a few times. He’s got to get his mojo back.

He did have a 17-yarder that was fun to watch, considering he made a couple guys miss and showed off some power at the end, but I need that early-season consistency back. His 32-yard kickoff return was much like his punt return: some wiggle and some power.