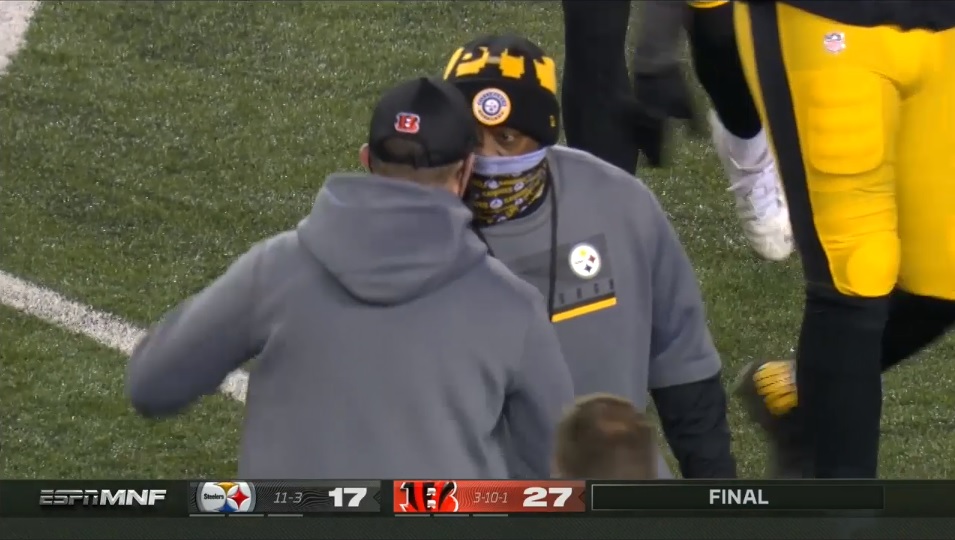 Steelers Nation learned of Kevin Greene’s death prior to the Steelers Monday Night game versus Cincinnati. His death shocked many fans since he was young at 58 years old and there was not much warning. It dampened my enthusiasm before the game ever started. Greene played just three of his 15 NFL seasons in Pittsburgh where he accumulated 35.5 sacks. To put this in perspective, James Harrison holds the Steelers franchise record for sacks with 80.5 gathered in his 14 years wearing the Black and Gold. Greene totaled 160 for third all-time. Just three years a Steeler but it seemed like he played in Pittsburgh for at least a dozen seasons. He thought enough of the Steelers organization to have a Terrible Towel dangling from his belt during his Hall of Fame Induction ceremony. A great loss.

The Bengals did not have much to play for. In fact, a loss was to their advantage since they were eliminated from the playoffs and a loss would give them a higher draft pick in 2021. The Dallas Cowboys beat the Bengals by 23 points and knocked out their second-string quarterback. Third stringer Ryan Finley would start against the Steelers.

However, the Bengals came onto the field very motivated and ready to play. JuJu Smith-Schuster followed through on his promise to be himself and told an interviewer he would dance on the Bengals logo prior to kickoff. Bengals player Vonn Bell asked about JuJu’s plans in a separate interview prior to the game stated, “It’s kind of disrespectful at the end of the day. But they’re on top right now so you can’t really say nothing right now. We just gotta go out there, between the lines, go out there and hit him and let him know where he stands.”

.@Vonn knocks it out from Pittsburgh TikTok star.

The Steelers entered the game without the services of running back James Conner or linebacker Vince Williams. Plus, guard Kevin Dotson held out due to a should injury. Still, on paper most agreed that the Steelers were a much stronger team and motivated to atone for two straight losses. A win would clinch the AFC North title. One of the keys to victory outlined by Dave Bryan and echoed by others was to build an early lead.

The offense could not produce a first down in their first three possessions playing against a very weak defense. (The Steelers 17 points second lowest points scored against the Bengals since the Chargers scored 16 on the Bengals in week one). On the third drive, the Bengals recovered a muffed snap between Maurkice Pouncey and Ben Roethlisberger. How many years have they played together? The Bengals quickly took a three-point lead.

A couple possessions later. Ben passed to JuJu-Smith-Schuster just behind the line of scrimmage. Vonn Bell lit JuJu up like a Christmas tree who lost the ball which Jordan Evans recovered. Initially, officials ruled an incomplete pass, but the Bengals challenged the call. The replay showed JuJu catching the ball, securing it, and taking a couple steps. Replay official overturned the call and the Bengals drove 38 yards for a 10-0 lead. There was no mistaking Bell’s body language. He was ecstatic. Great play but could the pregame interviews have provided additional satisfaction?

Several folks blame the turnover on Ben’s “hospital pass” to JuJu. Yet, I have seen numerous other passes to JuJu in traffic where he bulled his way for extra yardage. Ben already caused one turnover for a score why not add this one too?

Ben did throw an interception intended for JuJu on the very next drive. It was not a good pass and suddenly Cincinnati had a 17-0 lead after turnovers gave them starting positions at the Pittsburgh 20, 38 and 26. The defense forced two three and outs to start the game but could not be expected to hold Cincinnati scoreless with such a pathetic performance by their counterparts on offense.

Steelers defense on date with offense during first half. #HereWeGo @Steelersdepot @Alex_Kozora pic.twitter.com/y4sBoIaant

STEELERS WAKE THEN BACK TO SLEEP

The offense woke up in the third quarter scoring 10 points. Chase Claypool caught a 37-yard pass. Then Ben connected with Diontae Johnson for a 23-yard touchdown. The defense forced the Bengals to punt and the offense got to the seven-yard line. Benny Snell’s 29 yard run the big play in this drive. Chris Boswell chipped in a field goal to make it 17-10. The Steelers within striking distance.

Unfortunately, the offense could not convert a third and one and punted with 2:33 left in the third quarter. Jordan Berry punted 61 yards for a touchback. A big defensive stand needed. Instead, the Bengals marched 80 yards on a drive that consisted of eight runs, one pass to A.J. Green for 10 yards, and a five-yard neutral zone infraction by TJ Watt. That means 65 yards gained on the ground including Finley’s 23-yard keeper for the touchdown and a 24-10 lead.

SCORE BUT THEN SNORE

The Steelers offense scored again on Benny Snell’s one-yard plunge. Officials kept the drive alive by flagging the Bengals for defensive pass interference on fourth down which placed the ball at the one-yard line. The score is now 24-17. The Bengals last pass was in the third quarter. The defense forced a punt but not until the Bengals gain a first down on the ground and took 3:15 off the clock. Ben throws four straight incompletions under heavy pressure. The all-22 will show if he had open receivers as his intended targets looked well covered. The Bengals kick a field goal after three runs takes the clock to 12 seconds. Ben kneels and the Steelers lose 27-17.

The Steelers embarrassed themselves.

Mike Tomlin and team leaders preached physicality and taking care of business on the field in interviews leading up to the game. They talked the right talk. But the Bengals players listened well. They walked the talk. I don’t blame this loss on any single player though Ben’s passing and some decisions atrocious.

If I’m Mike Tomlin, I address the entire team. But the team captains should call a player only meeting. Who is in and anyone else GTFO.

The Steelers brought boxes containing AFC North Champion hats and shirts to Cincinnati in anticipation of beating a 14.5-point underdog. Not sure if they repacked them for the flight home to Pittsburgh. They may have just shipped them to Cleveland.

The Pittsburgh Steelers will be in the 2020 playoffs. In the opinion of this average Steelers fan, they are one and done. There are just 53 men who can prove me wrong.

I always like to include a music selection. One of the jobs of parents is to teach their children good manners. One of the basic principles is to respect others. Here is Teach Your Children  by Crosby, Stills, Nash & Young