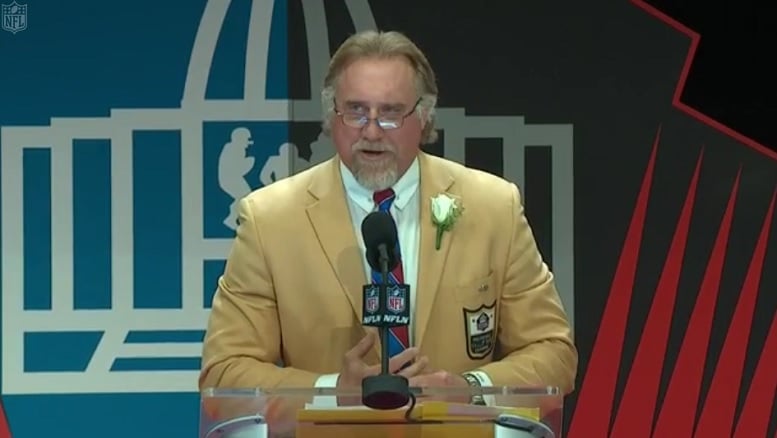 Former Pittsburgh Steelers’ outside linebacker and Hall of Famer Kevin Greene died at the age of 58 on Monday, according to multiple reports.

Greene spent just three years of his long NFL career in Pittsburgh. But he made his time count. In 48 starts with the Steelers, Greene racked up 35.5 sacks, including leading the league with 14 of them in 1994. He was named to a pair of Pro Bowls and one All-Pro team during his time with the black and gold.

Drafted in the 5th round out of Auburn by the Los Angeles Rams in 1985, Greene finished his NFL career with 160 total sacks. That figure still ranks third all-time. He spent the bulk of his career with the Rams and also had stints with the Steelers and 49ers before finishing his career with the Carolina Panthers. He made five career Pro Bowls and two All-Pro teams.

He was inducted into the Pro Football Hall of Fame in 2016. His complete HOF speech can be viewed at the link here.

Greene got into coaching after his playing days. He served as the Green Bay Packers’ OLB coach from 2009-2013 and in the same role with the New York Jets from 2017-2018. There were times where we called on the Steelers to hire Greene as the Steelers’ outside linebackers coach, an idea that Greene publicly seemed receptive to.

If My Steelers need me, I'm there. I hope they know that.

Greene were part of tremendous Steelers’ 90s linebacker groups consisting of Chad Brown, Levon Kirkland, and Greg Lloyd. He was a terrific player and by all accounts, equally good person who deserved to wear his gold jacket.

UPDATE: The Hall of Fame has issued a statement regarding Greene’s passing. From HOF President David Baker.

Hall of Famer Kevin Greene has passed away at the age of 58.

We will keep his legacy in the Game alive forever at the Pro Football Hall of Fame.

“The entire Pro Football Hall of Fame family mourns the passing of Kevin Greene. I regarded him as a personal friend and a true Hall of Famer in every sense. He possessed the most incredible can-do attitude of anyone I ever met. He was a great player, but more than that, he was a great man. Our thoughts and prayers are with Kevin’s wife, Tara, and their entire family. We will forever keep his legacy alive to serve as inspiration for future generations. The Hall of Fame flag will be flown at half-staff in Kevin’s memory.”

In part, it reads: “We lost an amazing player and person this morning with the passing of Kevin Greene. His sudden death is a shock to us all as he was a close friend and teammate to so many people in the Steelers family…my condolences to out to Kevin’s wife, Tara, their children and the entire Green family in this most difficult time. They will always be members of the Steelers family and in our thoughts and prayers.”

Stephon Tuitt, who now wears Greene’s #91, sent out this message moments ago.