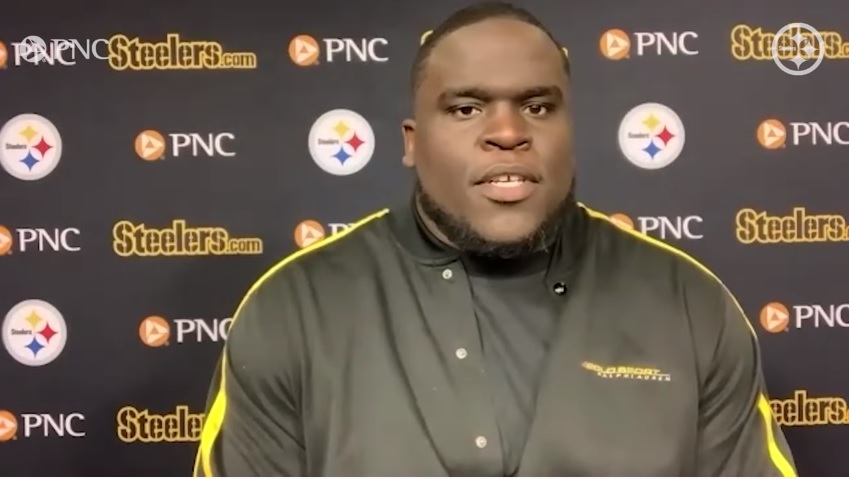 Kevin Dotson’s rookie season probably isn’t how he imagined it. Playing football in a global pandemic, Dotson himself getting sick with the coronavirus. But one piece of that picture he had in his head remained the same. Making his NFL debut and playing well.

Dotson has done a rock-solid job filling in at both guard sports throughout the season. He began the year at RG for David DeCastro who battled early-season injury before taking over the LG mantle after Matt Feiler went down. Though the jump to the NFL has been an adjustment, Dotson says he’s happy with where he’s at.

“I feel like I belong now,” he told reporters on a Zoom call via the team website. “In the games that I play, I feel like I’m on the level. A little bit of before I got drafted, kinda had more of a the mindset of, I didn’t know how the NFL was going to be. But once I got my first snaps in a real NFL game, it kinda solidified it in my mind.”

Dotson logged nine snaps at right guard at the end of the team’s opening win over the New York Giants. The next game offered his first start, playing well against the Denver Broncos. For the season, he’s officially made three starts and will make his fourth against the Browns this weekend. He’s coming off a good showing against the Colts’ impressive defensive line, something that’s adding to his confidence moving forward.

“Every time I’ve been in games that I’ve got to start, [I’ve] pretty much been against kind of big-name people. So every time I get to go against somebody, who’s a big name and I do good enough, people start to notice it. I just add that to my confidence ladder, you know. Just be able to keep stacking things, keep stacking these things until I’m the person that they ask future defensive rookies. ‘Oh, you went against Kevin Dotson? How did it feel?’ That’s what I want to in the future.”

Dotson held Colts’ DT DeForest Buckner in check this past week. Check out our tape breakdown of his performance that highlights the impressive job he’s done in pass protection this season.

Performances like that is giving Dotson the confidence to aim towards big-time goals.

Dotson is expected to enter 2021 as the team’s starting left guard. He’ll replace Matt Feiler, who will either sign elsewhere in free agency or re-sign and shift out to right tackle, the job he held in 2019.