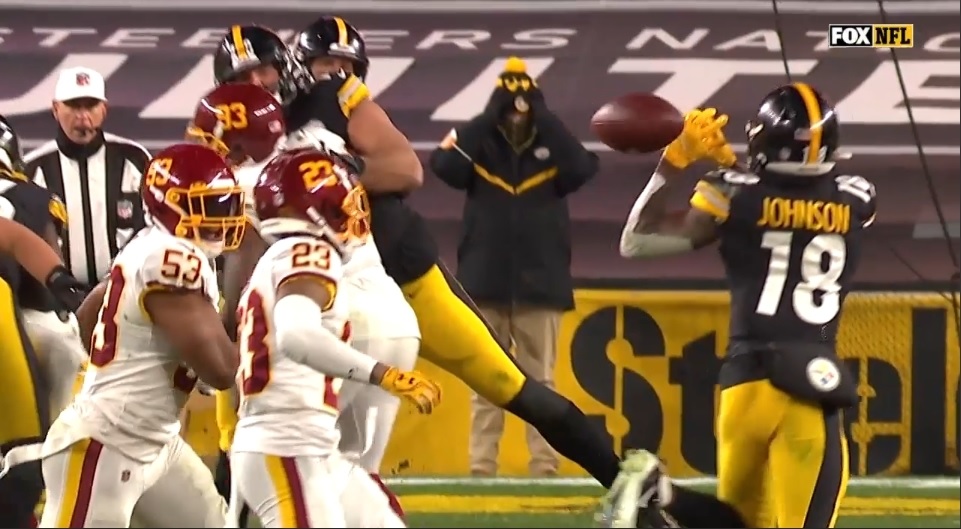 Over the past two games, Pittsburgh Steelers’ tight ends and receivers have dropped 14 passes. A whopping 40% of Ben Roethlisberger’s incompletions against the Baltimore Ravens and Washington Football Team were via drop. It’s one of the biggest issues with the Steelers’ present day offense. And JuJu Smith-Schuster believes he knows the reason. Talking to Pittsburgh media Thursday, he weighed in with his thoughts on the team’s collective butterfingers.

“As far as dropping the ball, it’s more people were just trying to make a play before it happens,” Smith-Schuster said via Steelers.com. “A lot of the times you’ll see the guy try to run before catching the ball. Trying to get upfield. And it’s very simple. These are easy passes that we’re doing. These are passes that we can make if you just focus on concentrating.”

We compiled video of all 14 drops from the past two games. Diontae Johnson leads the team with six but he’s far from the only offender. Eric Ebron has four and even Smith-Schuster has two. In some of those clips, you can see receivers take their eye off the ball and look upfield.

If you can stomach it, take a look.

By my count, over the last two weeks, the Steelers have dropped 14 passes.

Here's a look at all 14. #Steelers pic.twitter.com/IDWRy2rajy

Giving them *only* 14 could be too generous. Chase Claypool had a couple that could be argued as drops and I left poor Jerald Hawkins off the list for his goal line target. Not only is the volume of these drops alarming, the context when they happen is equally troubling. Third down, red zone/end zone, end of game moments that are costing this team drives, points, and on Monday, wins.

The leader of the group, Smith-Schuster was asked what advice he gives to teammates who are struggling to catch the ball.

“This is something that they’ve been doing everyday their whole life. So I don’t really say much. I say, ‘keep your head up, there’s still a lot of game to play and the outcome of it can still change.'”

As Mike Tomlin threatened Tuesday, those who continue to drop the ball will soon find themselves on the bench. The Steelers’ offense will need to be much more buttoned up Sunday night against a Buffalo Bills’ offense whose red hot and capable of testing the Steelers’ defense more than most teams they’ve faced this season.