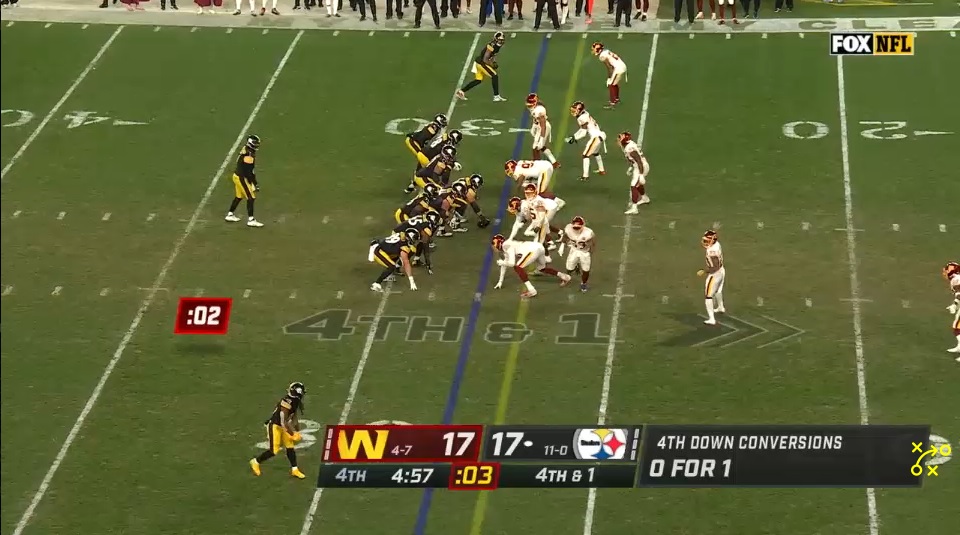 Lately, the Pittsburgh Steelers have been abysmal when it comes to situational football. In their past two games against Baltimore and Washington, they’ve been below average on third down, horrific in the red zone, and losing the turnover battle.

They’ve also been a mess on 4th down for the past several games. Over the last five weeks, beginning Week 9 against Dallas, Pittsburgh is just 1/7 on 4th down. Six of their seven failed fourth downs this season have come over that span. And they’re losing in short-yardage situations, not 4th and a mile late in a game where teams realistically won’t pick it up.

Much like the constant barrage of drops, these failures have been game-changing plays. And against Washington, finally cost them a win. Let’s take a look.

It all started in Week 9 against the Cowboys. 4th and 1 run out of shotgun with Benny Snell. As has been the theme of this group for too long, the offensive line loses at the point of attack. Chukwuma Okorafor struggles to wash down the three tech on his down block. The DT shoots the gap and gets penetration on the play.

Elsewhere, LG Matt Feiler loses his base block against #94. He shows good initial punch and placement off the line but arguably pops up a little too high and has trouble sustaining the block. The defensive linemen is able to shed the block and knife into the backfield, attacking Snell and not letting him fall forward past the sticks. Pouncey can’t get off the combo block from the head-up nose tackle to work to the MIKE. Snell is stopped at the line of scrimmage and the Steelers fail to convert. Failure up front on the offensive line not doing their job.

Pittsburgh got aggressive and tried to close things out with a 4th and 1 run with James Conner and a power run left side. Appears to be miscommunication on this play. Need the frontside of this run scheme to down block with backside pullers, the guard and tight end, pulling across and kicking out any remaining defenders. Running back hits the crease between them. That’s the goal.

OT and 6th offensive linemen Jerald Hawkins is aligned with inside leverage on the RDE, #94. He begins to block him but comes off to pick off the LB (#54) since he has a better angle and leverage to take him. That’s arguably the right decision. But neither of the pullers account for the now-unblocked RDE. DeCastro and McDonald pull past and end up taking the same man, the safety #37. To be fair, Hawkins would’ve been better to wash the LB right away because initially, it looked like he was taking the RDE. That led to the communication breakdown.

The defensive end blows up the play and tackles Conner in the backfield. This should’ve been an easy conversion. But the blockers struggled to adjust on the fly and it led to the turnover on downs.

Now the Steelers get too cute. 4th and goal from the one against Baltimore. Fine with the decision to go for it. Hate the playcall. Steelers are in heavy, 22 personnel (2 RB, 2 TE) but spread things out in an empty formation. Asking runners and blockers to make plays in the pass game. Bad idea.

Roethlisberger’s first read is a quick out to Chase Claypool along the right side. It’s covered. By the time Roethlisberger comes back to his left, Derek Watt is now about to be covered up (and moving into the LBs window instead of settling). Benny Snell and Vance McDonald run themselves out of the end zone, leaving Roethlisberger with few options. Under pressure, he heaves the ball into the end zone and picked by LB Tyus Bowser, who at least does the team a solid of running out of the end zone instead of kneeling.

Steelers running a man-beater out of trips bunch on 4th and 2. Point man Vance McDonald releases vertically while Chase Claypool runs underneath him. But Marcus Peters does a great job of fighting through and making a play on the ball, breaking up Roethlisberger’s throw. Pass is incomplete. Not a bad playcall here. Credit to Baltimore for a good play.

Finally, we get to the mess that was Monday’s game. 4th and goal. Issue here is the backside of the play. Eric Ebron is set in motion away from the run. But he ends up settling too wide and can’t execute his cutoff block on RDE, #99 Chase Young. Young flies in to make the tackle on Snell before he can leap over the goal line. Maybe the timing of the snap was off and the ball should’ve been hiked a split second before but I don’t know why Ebron ever aligned himself to the outside of the man he’s gotta block. Know the defense is going to be aggressive and fly as soon as they get their run key, which Young does as he sees LT Alejandro Villanueva block down with low hat (run key).

On the frontside, Vance McDonald comes off his block (why, I don’t know) allowing the LB to meet Snell at the goal line. Young’s tackle was the key here, without it, I think Snell gets over the top, but I don’t know why McDonald did what he did. It’s a dive up the middle. Take the inside man.

In one of the biggest moments of the game, Steelers tied at 17 in the fourth quarter, Randy Fichtner dials up this gem. 13 personnel, empty set with Anthony McFarland split out to the bottom. Sluggo (slant ‘n go) route with him. His route here actually isn’t that bad but Ben Roethlisberger’s throw is off the mark and McFarland can’t adjust to it. Incomplete.

Calling this play in a vacuum is ok…I suppose. But in such a critical moment, it’s hard to fathom. Running a play they haven’t run all year with McFarland this personnel and probably barely practiced, given the fact Roethlisberger only participated in Sunday’s walkthrough and “sluggos to McFarland” isn’t exactly basic install stuff.

I’m sure they ran it once in a practice, in a walkthrough leading up to the game, but there’s too many new variables at play to have a lot of confidence in everything going right and this working. Like the 4th down throw on the goal line against Baltimore, this is just overthinking and not trusting your personnel. Let your receivers – the Steelers have lots of good ones – make these plays.

Failing on any of these plays would be a disappointment. Failing on all of them is hard to get your head around. The issues are arguably two-fold. Too much cuteness with some of the offensive playcalls and an offensive line struggling to do much right. Not physical enough, allowing to much penetration, and plays getting blown up before the back has much of a chance. Unfortunately, “playcalls and offensive line” are big, broad problems to try and correct. But the Steelers need to get it right.