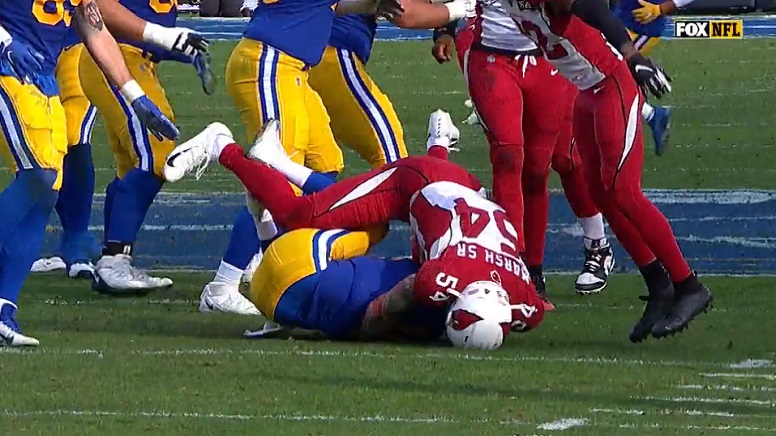 The Pittsburgh Steelers signed outside linebacker Cassius Marsh off the Indianapolis Colts practice squad on Wednesday and while I haven’t had a lot of time to dive deep into his career tape, I have had a chance to look at his sack reel, which I have complied for all to see below. My main observations from his career sack reel are below as well.

For starters, the thing that sticks out the most about Marsh from his career sack reel is his strong effort and motor. He’s also seemingly effective at twisting inside and as you’ll see in his reel below, he has a nose for getting the football loose and especially on his sacks. In total, Marsh has been credited with nine total forced fumbles with a good many of those coming on his sacks.

Marsh mostly seems to win with speed and agility, either around the edge, inside on a twist, or via swim to the inside if a tackle oversets against him. He’s not a huge hands, rip, speed-to-power pass rusher, at least according to his sack reel. Marsh seems to be most effective as a pass rusher out of wide-9 alignment. He can play on both sides and rush from a standup position or with his hand in the dirt. He seems to be most effective on the right side, however.

The Steelers are Marsh’s third team so far this season so that’s obviously a concern. While I haven’t gone deep into his film from this season when he was with the Jacksonville Jaguars and Colts, it’s obvious he’s a backup depth player and special teams contributor. It’s worth noting, however, that he has managed to stick in the NFL for seven seasons despite not being a starter.

The most snaps defensive snaps he’s played in a single season since being drafted in 2014 is 550 and those came in 2018 as a member of the san Francisco 49ers So far this season, Marsh has yet to register a sack. He has nine total tackles on the season and a forced fumble, which came on special teams. He’s played a little less than 150 defensive snaps so far this season.