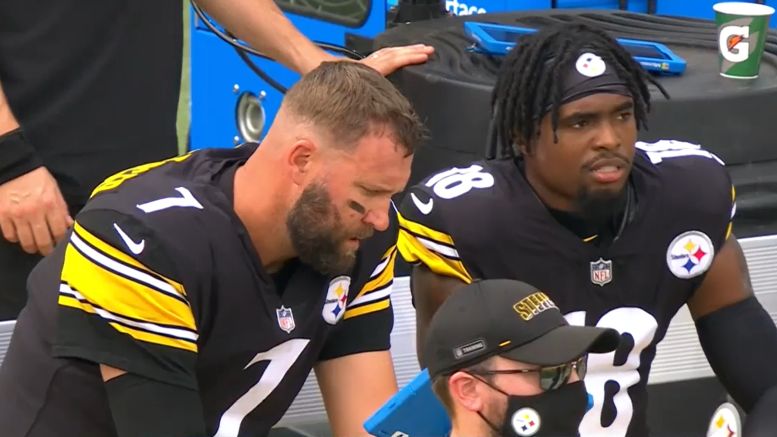 Pittsburgh Steelers second-year wide receiver Diontae Johnson hasn’t been having the best of times in recent weeks. He has been plagued with poor hands of late, dropping at least two passes, if not more, in each of the past three games. After dropping two on the opening two possessions on Sunday, he found himself benched for the remainder of the first half.

He would come back and catch three more passes in the second half, all on the same drive, their only long scoring drive of the entire night, and his contributions in that instance helped them keep the game competitive until late, but that doesn’t mean everything is reset to square one.

Quarterback Ben Roethlisberger tries to make it a point to show his guys that he trusts them, both on and off the field, frequently coming right back to a player who makes a mistake to give him a chance to redeem himself, or saying after games that he needs to give them better balls to catch. He talked about Johnson went addressing the media yesterday.

“We had a nice talk on the sideline at the end of the first half”, he said. “I thought it was a good talk. I won’t tell you what we said. If he wants to divulge what was said, that’s fine. Just trying to encourage him, and I was encouraged by the second half”.

“I thought he came out and made some plays and showed some physicality in some of those catches, putting his head down and trying to get his yards and stuff like that”, he said. “I was encouraged by his bounce back, really proud of him”.

Prior to his recent struggles, Johnson was coming off the most productive period of his career. Over a two-game span, he caught 18 passes for more than 200 yards. He had never had a 100-yard game until he recorded one in back to back weeks.

Over the past three games, he has only caught 20 of the 32 balls that have come his way, with a good seven or more of them being dropped by himself. He has gained 157 yards on those 20 receptions, along with one touchdown, giving him five on the season.

He also has 69 catches to date, or 10 more than he had in 16 games during his rookie year. His 694 receiving yards are above where he finished last year as well, and it also leads the team, though both JuJu Smith-Schuster and Chase Claypool are not far behind.