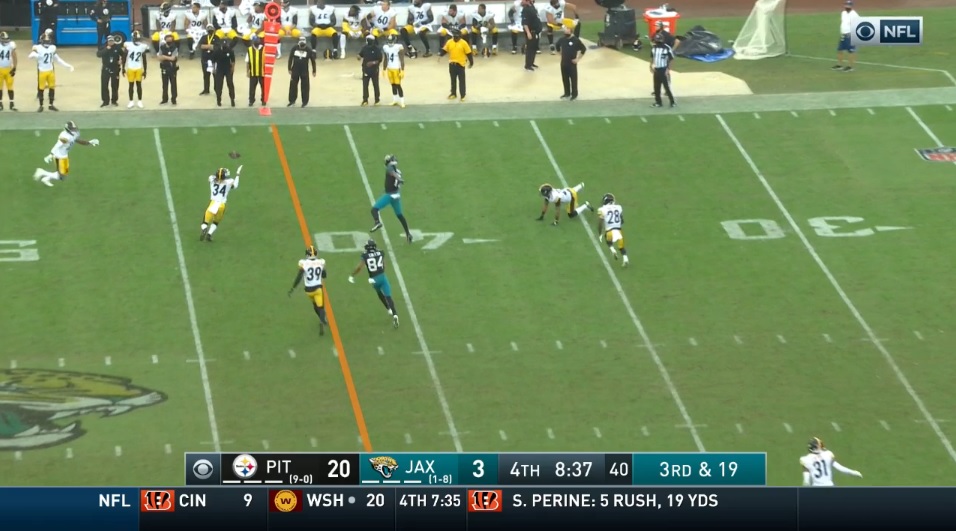 Terrell Edmunds exited Sunday’s win over the Jacksonville Jaguars with more career interceptions than he entered it. He picked off QB Jake Luton twice, doubling his NFL total in three seasons prior to Week 11. That’s been the highlight of a much improved third season for Edmunds. But to Mike Tomlin, his progression and stellar Sunday performance doesn’t surprise him.

Speaking with reporters after the game, Tomlin gave his evaluation and impression of Edmunds.

Edmunds was supposed to be a part-time player his rookie season in 2018. But Morgan Burnett’s year was plagued by injuries, forcing Edmunds into the lineup. He didn’t look back and has logged almost every single snap since. He’s yet to miss a game in his career and played nearly 100% of the snaps in every single one. That’s allowed for quicker progression for a raw rookie when the Steelers drafted him out of Virginia Tech.

His two interceptions today lights up the box score but Tomlin’s been impressed by Edmunds’ overall game this season.

“Really [become a better player] in all areas. In run/pass recognition. I can’t say enough about his run game fits and the way he’s playing in that element of the game here in 2020.”

His run defense and tackling are themes we’ve talked about throughout the season. Josh Carney’s missed tackles report has Edmunds missing just 6% of the time, halving his miss rate in 2018 and 2019. And his run fills have been more aggressive and effective than before, perfect for a safety who spends about 25% of his time in the box.

Nice fit and fill by Terrell Edmunds and Robert Spillane. Wider split between LG/C tips off the TE is going to insert block through the A gap with the back behind. Edmunds shoots the gap, Spillane blows up the TE, Heyward holds POA, gain of only one. #Steelers pic.twitter.com/9iHjUYQBcd

Glad to have you back, Tyson Alualu. Swim the center, make the tackle. Another good fill by Terrell Edmunds here too. #Steelers pic.twitter.com/ktyoySoIER

Though he hasn’t broken out the same way as Bud Dupree, their career arcs are similar. Young, raw players who needed time to mature and adjust to the fast and furious NFL game. Edmunds’ experience has played a key role in speeding up that progression.

It’s fair to argue Edmunds still wasn’t the ideal choice for the team’s first round pick. Pittsburgh took him because they knew he wouldn’t be there with their second round pick and gambled on an athletic, physically gifted safety from a football family. His first two years were rocky and no, he’ll never be Minkah Fitzpatrick, but he’s doing his job extremely well and rewarding the team – and himself – with one heck of a performance Sunday.