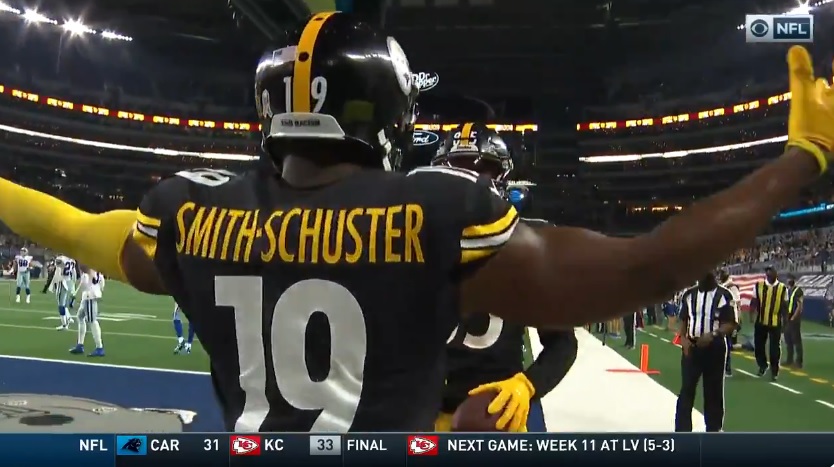 Despite the Dallas Cowboys being one of the worst defenses in the NFL, the Steelers offense struggled in their 24-19 win over the Cowboys.

It was an ugly start for the Steelers, as both the offensive and defensive units struggled to gain traction in the first half. The Steelers offense punted on three of their first four possessions, and was stuffed on a fourth and one on their other drive.

The Cowboys offense moved the ball with ease through the first 30 minutes of the game. They would kick a field goal on their first drive of the game, moving 65 yards in 12 plays that put them on the board with a 3-0 lead.

Cowboys quarterback Garrett Gilbert was making his first career start and made plays with not only his arm, but his legs as well. On their touchdown drive, Gilbert would scramble for gains of 15 and 11, and would cap off the drive with a 20 yard touchdown connection to CeeDee Lamb. The Cowboys would lead 10-0.

After another Steelers three-and-out, the Cowboys used a 73 yard punt return by CJ Goodwin to set them up with good field position. The Steelers defense would hold, and force a Cowboys field goal to make the score 13-0 with just under four minutes left to go in the half.

The Steelers offense would finally put together a drive right before the half. Big Ben would engineer a two and a half minute drive over nine plays to lead the offense down the field. Midway through the drive, Big Ben took a big shot that left him grabbing his knee in pain, but he would finish the drive despite a potential injury. After completions to Claypool and Ebron, Big Ben would find James Washington for a 17 yard touchdown. A missed extra point made it 13-6 with a minute and ten seconds before the half.

On the Cowboys next drive, Cameron Sutton would force a fumble, and Minkah Fitzpatrick would recover. Ben Roethlisberger went to the locker room early to get his injury evaluated, so Mason Rudolph would take snaps at quarterback. With two seconds left Chris Boswell would knock in a 59 yard field goal to make the score 13-9 at the half.

After giving up 158 yards of offense in the first half, the Steelers defense continued to struggle stopping the Cowboys offense. Tony Pollard would break off a 20 yard run to put the Cowboys near the redzone, and would come away with a field goal to extend its lead to 16-9 early in the third.

A hobbled Big Ben would come out to play in the second half. However, on their first possession, the offense would once again go three and out, giving the Cowboys the ball back.

The combination of Tony Pollard and Ezekiel Elliot gave the Steelers issues on their next drive. The drive would last over six minutes, over 12 plays that once again ended in a field goal, to put the Cowboys ahead 19-9.

The Steelers offense responded on the next drive, thanks in part to the Big Ben-Juju Smith-Schuster connection. Big Ben would complete passes of 20, and nine to help move the offense down the field. A few plays later, Roethlisberger finds Juju for a 31 yard touchdown. Boswell’s extra point was blocked, making the score remain at 19-15 at the start of the fourth.

The Cowboys would again carve up the Steelers defense, and move all the way down the field to the Steelers five yard line. Gilbert would be intercepted by Minkah Fitzpatrick on third and goal, giving the Steelers another extra possession.

The Steelers offense would continue to chip away at the Cowboys lead, as Big Ben would hit Dionate Johnson and Chase Claypool for big gains. The drive would stall at the Cowboys 24 yard line, and the Steelers would settle for a 43 yard Chris Boswell field goal. The Cowboys would cling to a 19-18 lead.

After forcing a Cowboys punt, the Steelers would take over with just over four minutes left in the game. A Cowboys roughing the passer call kept the drive alive after three straight Big Ben incompletions, which would prove costly for the Cowboys. A few plays later, Big Ben hooks up with Johnson for a 42 yard connection, putting the Steelers in the red zone. Two plays later, Roethlisberger finds Ebron for an eight yard touchdown, giving the Steelers their first lead of the game. A failed two point conversion made the score 24-19.

The defense would come up big, stopping the Cowboys on fourth down on their ensuing drive. But the Steelers would give it right back, after turning the ball over on downs with just over 40 seconds left in the game.

The Cowboys worked their way down to the Steelers 23 yard line with just four seconds to play. On the final play of the game, the ball is knocked away, securing the Steelers win, 24-19.

It was a vintage game for Big Ben, completing 24 of 39 passes, for 306 yards and two touchdowns. The Steelers move to 8-0 for the first time in franchise history, and will host the Bengals next Sunday after playing three straight away games.