The Pittsburgh Steelers have now released their third official injury report of Week 12 ahead of their Sunday home game against the Baltimore Ravens and the Wednesday offering shows several players going in the right direction in their practice participation levels.

Sitting our Wednesday’s practice for the Steelers were running back Trey Edmunds (hamstring) and running back Jaylen Samuels (quadricep). It’s now looking like both players could indeed wind up missing the Sunday game against the Ravens. Both players sat out last Sunday’s game with their respective injuries as well.

Steelers cornerback Joe Haden (knee) was a limited practice participant on Wednesday after sitting out on Tuesday. That’s great news for him and especially with the game being moved from Thursday night to Sunday afternoon.

Of that list of nine players, Smith-Schuster and Heyward were previously listed as being limited on the team’s Tuesday injury report.

As previously reported, the Steelers game against the Ravens that was scheduled to be played Thursday night at Heinz Field had been rescheduled for 1:15 p.m. EST on Sunday due to a COVID-19 outbreak within the Baltimore organization. 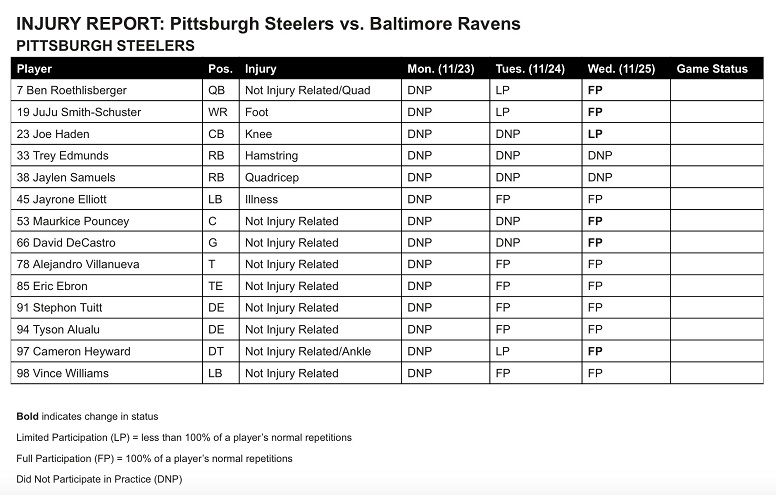