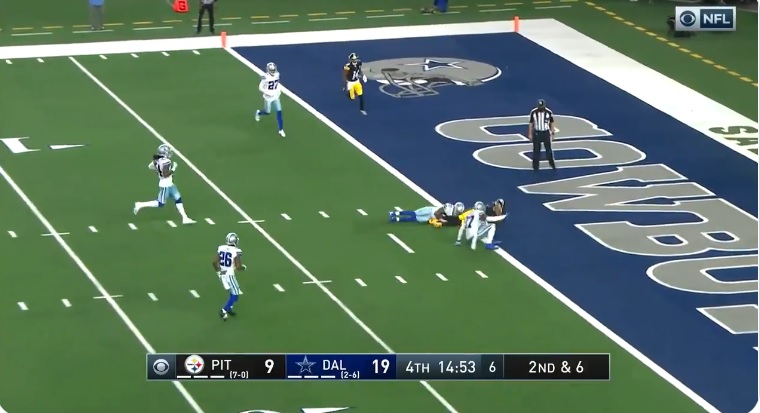 Winners and losers from the Pittsburgh Steelers 24-19 win against the Dallas Cowboys.

Jordan Berry – Usually not a good sign when your punter is on the winners list. Especially when that list is short. Berry has been excellent in his three games back with the team.

Minkah Fitzpatrick – Going to get on this list when you take the football away twice. Neither were particularly spectacular plays. The first came on Sutton’s forced fumble, the ball popping out into his hands, and the second was a result of pressure that popped Garrett Gilbert’s pass into the air. Still, turnovers and turnovers and they were huge plays.

JuJu Smith-Schuster – Coming up big time and time the last three weeks. Great route on his TD, turning the Cowboys’ DB inside/out with an outside stem before breaking back to the middle of the field. Barreled his way into the end zone to finish it off. No doubt he’s still Roethlisberger’s go-to when the team needs a big play and easily their most consistent presence between the numbers. He led the team with 93 yards.

Cam Heyward – Heyward was impactful against the run but he’s on here for making the big play late. One of the best bull rushes you’ll ever see against Cowboy’s LG Connor Williams to bring Gilbert down on 4th and 8. Elite player making an elite play.

Coaching Staff – Across the board. No one can deflect blame. Mike Tomlin, Keith Butler, Danny Smith, Randy Fichtner. Put them in any order you want. Butler played a ton of soft zone that got carved up, staying in his base in an effort to stop the run but giving up quick hitters to WRs. Fichtner called too many 2nd and long runs (one is too many but there were more). Smith’s unit was poor in most areas. And Tomlin is in charge of it all, a team that came in low-energy and clearly tired after a couple of physical road games.

Offensive Line – The o-line got no push in this game, even though they were facing one of the league’s worst run defenses. Matt Feiler and Maurkice Pouncey struggled at the point of attack and Chukwuma Okorafor got blown up on a failed 4th and 1. Feiler also lost his block on the play. In pass pro, Alejandro Villanueva had one of his worst games of the season, struggling with Randy Gregory. Pittsburgh’s run game went nowhere today. That’s been the story for basically three weeks.

Run Defense – Last week against the Ravens was semi-expected. Not this week. The Cowboys consistently won up front. Steelers’ youth and inexperience along their d-line depth was exposed, though blame gets shared around. Edge contain was poor and LBs had troubles getting off their blocks. Cowboys ran for over 140 against this front seven.

Mason Rudolph – How does Rudolph look in year 3? Not great! Limited sample size, tough coming off the bench at the end of the half, but his limited action was unimpressive. And I’m being kind. Floating out routes, forcing throws, Pittsburgh relying on Chris Boswell to boot a 59 yarder at the end of the half.

Special Teams – Special category for this unit. Berry aside, it was bad. Boswell missed one extra point and had the other blocked. Missed that proved costly late in the game. The pooch kick off a Dallas personal foul penalty somehow went back 64 yards the other way, perhaps the longest kick return ever that was booted from the 50. This unit was as bad as it’s been all year, collectively, and those are the things that make supposed “easy” wins into nail biters.