The Pittsburgh Steelers have now released their second official injury report of Week 12 ahead of their Thursday home game against the Baltimore Ravens and the Tuesday offering shows a lot of difference from the estimated report sent out on Monday.

Not practicing for the Steelers on Tuesday per the injury report were cornerback Joe Haden (knee), running back Trey Edmunds (hamstring), running back Jaylen Samuels (quadricep), guard David DeCastro (not injury related), and center Maurkice Pouncey (not injury related). Edmunds and Samuels both missed the Week 11 game with their injuries and it’s not looking good for them to play Thursday night at this point. As for Haden, he was injured on Sunday, so we’ll have to see what Wednesday holds for him regarding practice level ability.

Limited on Tuesday for the Steelers were quarterback Ben Roethlisberger (quad), wide receiver JuJu Smith-Schuster (foot), and defensive tackle Cameron Heyward (ankle). Roethlisberger and Heyward are expected to be fine by Thursday night. As for Smith-Schuster, who injured his foot this past Sunday, like Haden, it will be interesting to see what Wednesday holds for him. He injured his foot while stepping on a penalty flag and looked like he twisted his ankle in the process. 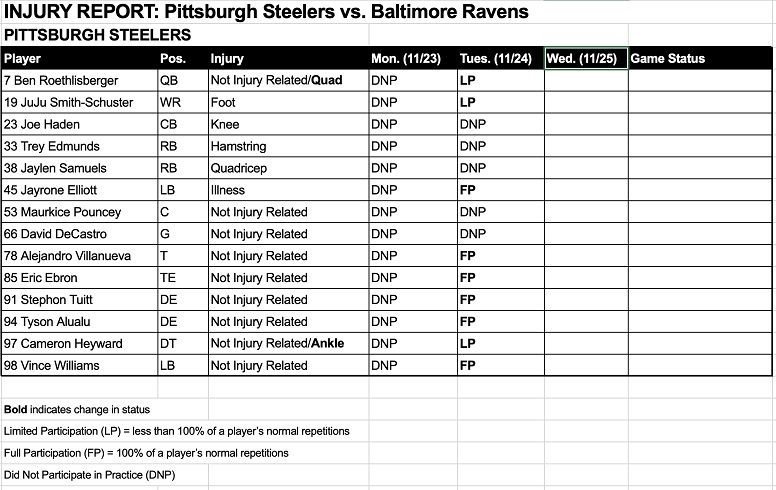