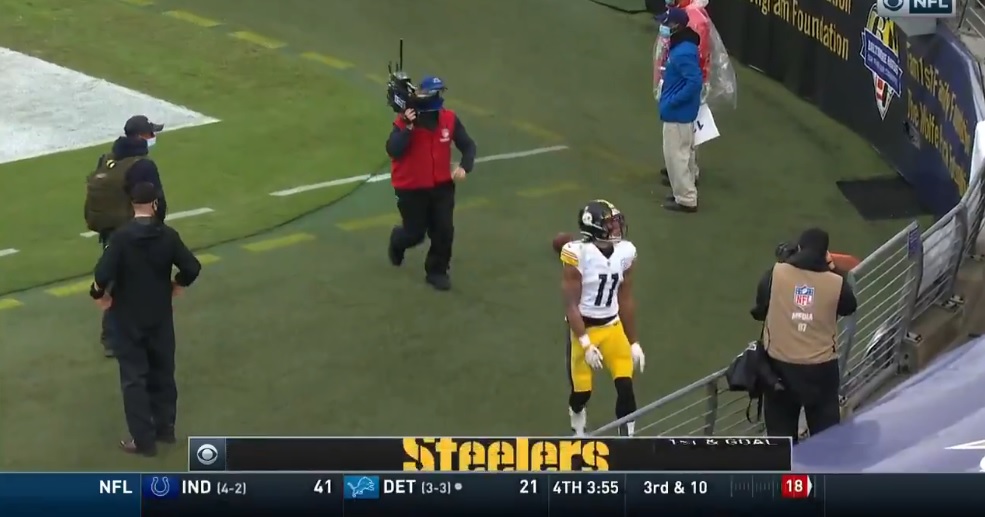 The Pittsburgh Steelers forced four Ravens turnovers, including one at the goal line to defeat the Baltimore Ravens in a heated divisional matchup, moving them to 7-0.

The game started off quickly with the Steelers getting a pick six on the third play of the game. Robert Spillane would return it 33 yards for a touchdown to put the Steelers up early, 7-0.

The Ravens would respond and drive down the field on their next drive. Lamar Jackson would find Miles Boykin for a six yard touchdown to tie the game up at seven.

Both teams would exchange fumbles, and punts heading mid way into the second quarter. With a little over seven minutes left in the half, the Ravens would drive down the field and punch it in from one yard out to go up 14-7.

After the Steelers ensuing drive stalls, the Ravens would use a 15 play drive to notch a field goal right at the end of the half to give them a 17-7 halftime lead.

An early third quarter interception by Alex Highsmith would set the Steelers offense up with a redzone opportunity. They would take full advantage, as two plays later, Big Ben would find Eric Ebron for an 18 yard touchdown. The Steelers would cut the lead to 17-14 early in the third.

After forcing a Baltimore three and out, the Steelers offense would come alive again. They used a 10 play, 77 yard drive that ended in a James Conner one yard touchdown. Steelers took the lead midway through the third quarter.

Both teams traded punts, then early in the fourth Baltimore would regain the lead on a three yard touchdown from Jackson to Marquise Brown. The score put the Ravens back ahead 24-21.

The Steelers offense once again had an answer. Ben Roethlisberger would find Chase Claypool for an eight yard touchdown to cap off an eight play, 80 yards over four minutes. The Steelers would take the lead 28-24.

The Ravens would march down the field right at the two minute warning. They would reach the Steelers six yard line and on fourth down, when Jackson tried to run it up the middle, he fumbled. The Steelers would recover, as Minkah Fitzpatrick forced the fumble, and Robert Spillane recovered.

With a little over a minute left to go, the Ravens would get the ball back. Jackson drove the Ravens down the field with five seconds left. The Ravens would try one last heave to the endzone, but the pass was again broken up by Minkah Fitzpatrick. The Steelers held on to win a wild one, 28-24.

The Steelers will face the Dallas Cowboys next Sunday afternoon at 4:25 pm ET.