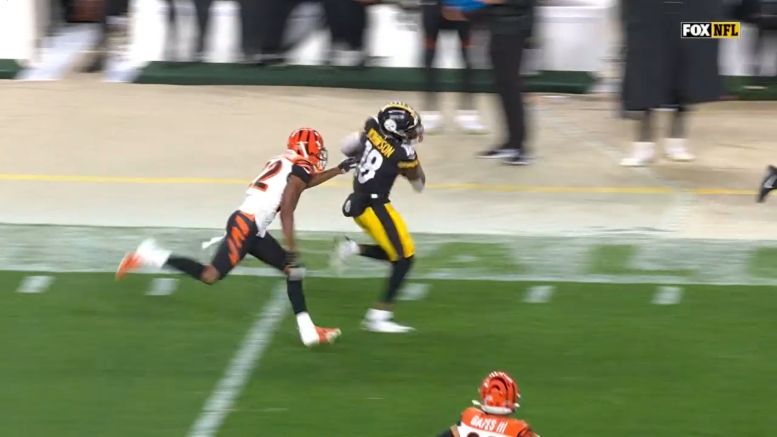 While the run game has faded in the Pittsburgh Steelers’ offense over the course of the past month, the biggest missing ingredient for most of the season has been the lack of consistent connections in the deep passing game. Today’s windy conditions at Heinz Field were not an easy time to do it, but an early connection between quarterback Ben Roethlisberger and wide receiver Diontae Johnson proved to be enough to give the offense the spark it needed to get things moving.

That play came with 2:52 remaining in the first quarter, marking the first play of the Steelers’ fifth possession of the first 15 minutes. Roethlisberger heaved one up down the left sideline and Johnson ran under it, under windy conditions, for a 46-yard gain. Two plays later, they combined again for Roethlisberger’s first of four passing touchdowns on the evening.

“There’s no question” that that play opened up the game, head coach Mike Tomlin said in his post-game press conference. “But they were packing the line of scrimmage pretty good, so some of the run sledding was difficult, so we weren’t surprised that there were opportunities in the passing game, particularly down the field”.

That is corroborated by what the quarterback said after the game, who told reporters that pushing the ball down the field “kind of became the game plan” based on what the defense was dictating. “Just looks that they started giving us kind of dictated that we were gonna have to start doing that a little bit, to just kind of in-game adjustments”.

He also credited offensive coordinator Randy Fichtner for the play call, and the offensive line for giving him time to get the ball out with Johnson running a double move. “When I let it go, I didn’t really know where it was gonna end up because of the wind”, he admitted. “Just kind of those ones where you put some air on it and Diontae did the rest of the work. He made a great play”.

“That was the little spark that got us going, I felt like, just to make a big play down the field like that”, Johnson said for his own part. “Get us in good field position, and we wind up getting in the end zone. That was the lead that we needed, and we just kept going on adding on to it. it changed the game”.

Up to that point in the game, the Steelers had just 62 net yards of offense over their first four drives, though they did have six points to show for it. They moved the ball 74 yards on that one three-play drive, and they would score three times on their next five possessions to put it out of reach.