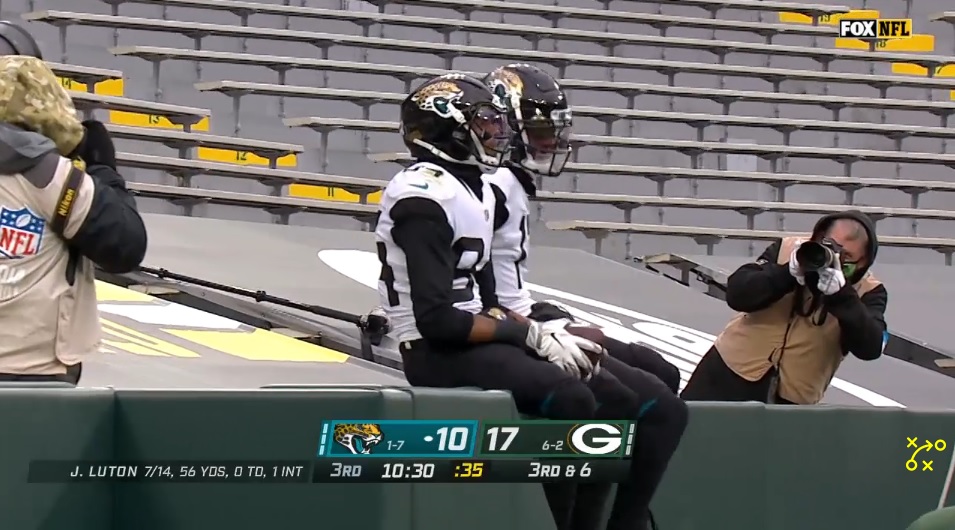 Here’s our analysis of the Jacksonville Jaguars’ offense.

Bread and butter of the offense, especially after turning to rookie Jake Luton. It’s not a coincidence starting RB James Robinson has had 20+ carries in the two games Luton’s started. Robinson is having a great season, a rookie UDFA whose fifth in the league in rushing. He’s averaging a solid 4.4 YPC with five rushing scores. Robinson has been their bell cow with 155 carries. The next closest non-QB on that list is Chris Thompson, a third down specialist with just seven carries and placed on IR earlier in the week. So Robinson is the dude.

Worth pointing out fellow rookie Laviska Shenault has gotten action as a runner and receiver. 11 carries for 54 yards so far. Luton does having a rushing TD, a 13 yard scamper finished with a pretty spin move, but he’s not a big threat with his legs. That’s his lone run of the year. As an offense, they have 29 runs of 10+ yards. Respectfully tied for 13th in the league.

The run scheme is varied between man/gap schemes and zone. They’ll utilize a power run game with backside players pulling. Robinson shows patience waiting and setting up his blocks, something I hope the Steelers get better at this week.

Often the backside guard but they’ll occasionally run pin/pull with the BSG/BST pulling. Also some counter with the FB or TE too. And even with Luton at QB, they’ll run RPOs and try to put the offense in the best situation, depending on box count.

Some other offensive stats. They’re 26th in points per game at 22.1 per game. Also 26th in rushing yards per game at exactly 100 but that’s partially game flow dependent. 1-8 teams don’t get to run the ball as often as they’d like. Their 4.5 team YPC is top ten in the league, a better representation of their run game chops. They’ve also been taking care of the football too. Only one fumble this season, one of the lowest numbers in the league. They’re doing well on third down (44.3% – 10th) and in the red zone (63.5% – 14th) which makes it kinda curious why this offense isn’t putting up more points.

Last note. As the title indicates, this is a very young team. On both side of the football. Only two players on the entire roster who are in their 30’s: QB Mike Glennon and TE Tyler Eifert. By comparison, the Steelers have eight. And well more than half of the Jags’ active roster, 29 of them, are 24 or younger. To again compare, Pittsburgh has just 21.

With Luton at quarterback for the injured Gardner Minshew, as I’m sure you know by now. He’s making his third start. In the two previous games, he’s completing about 60% of his passes with two touchdowns, two interceptions, and been sacked five times. For what it’s worth, one of those interceptions came when TE Tyler Eifert slipped and fell last week against the Packers.

Luton will have some weapons to throw too. The talent isn’t overwhelming but Jacksonville has three speedy, vertical receivers. DJ Chark is their top guy and averaging 13.3 YPC. Keelan Cole is right behind him at 12.6 on 34 receptions while Chris Conley has 26 grabs for 12.3 per catch. That’s three receivers with 25+ receptions and 12+ yards per catch. The only other teams who can say that are the: Texans, Chiefs, 49ers, Bucs, and Titans. Pretty small club. So watch out for the Jags’ speed. In fact, Luton’s second NFL throw was a nine route for a 73 yard score to Chark against the Texans. They have 27 receptions of 20+ yards, tied for 19th most in football.

Lots of 2×2 formations with mirrored concepts. Most teams in 11 personnel go 3×1 to isolate their X receiver. Not as much in Jacksonville. Probably because they don’t have that “guy” at WR. Chark is good but not that clear-cut, #1. They’re more focused on scheming guys open underneath and relying on receivers speed to win vertically.

See more twin sets and FiB (formation in boundary) than a lot of other teams too. Will align in 12 personnel with two wide receivers to one side and two tight ends to the other. For a Steelers’ team that doesn’t often travel CBs, even against those Twin WR sets (they prefer to walk an OLB out or roll the safety down) this could present a bit of an issue. 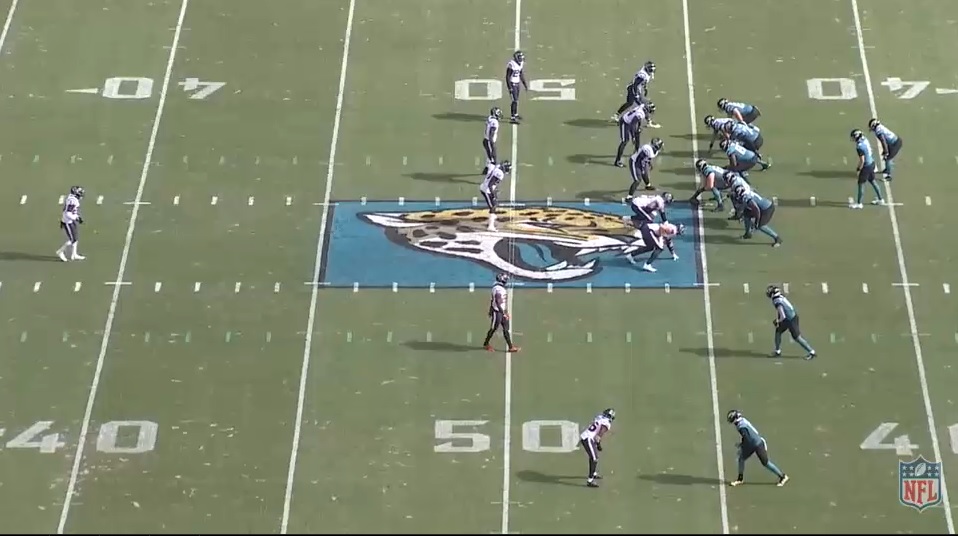 Fresh off of a beat down of the Cincinnati Bengals, the Pittsburgh Steelers travel to Duval for a battle with the woeful Jacksonville Jaguars and rookie quarterback Jake Luton, making his third career NFL start.

In previous weeks this offense had some real juice with Gardner Minshew III calling the signals, but after some up and down performances, head coach Doug Marrone made the decision to switch to Luton, a sixth-round pick out of Oregon State.

Luton started fast in his first career start, throwing a strike to star wide receiver DJ Chark Jr. against the Houston Texans for 73 yards and a score on his second throw of his career.

There’s a lot of confidence in Luton’s body language and mechanics on this throw. He knows he’s doing to take a shot here and does a great job working through his drop, reaching the top of his drop and firing a dime to Chark downfield between two defenders for the score.

Luton doesn’t have the biggest arm and won’t wow anyone with his measurables. However, he has really sound mechanics and has shown some solid accuracy in two starts.

His go-to guy is Chark without a doubt. Chark will receive a ton of targets, whether that’s on go routes, comebacks, screens, and outbreaking routes.

Chark is one to really worry about, especially against zone coverage. He’s very good at finding the soft spot in zone coverage and showing his quarterback his numbers. Here’s hoping the Steelers don’t play much zone coverage against the rookie signal caller on Sunday.

Along with Chark, Luton is starting to develop a strong rapport with Chris Conley Jr. Conley Jr. has become the possession receiver in recent weeks that has moved the chains and shown some juice after the catch.

Keelan Cole has emerged in recent weeks as a key chain-moving receiver for the Jaguars as well, especially without dynamic rookie wide receiver Laviska Shenault Jr. likely out again this week with a hamstring injury.

The real concern for the Jaguars this week has to be the health of the offensive line. In recent weeks, tackle Cam Robinson, center Brandon Linder, guard AJ Cann, and guard Andrew Norwell have battled injuries during the week.

This OL has quite a few names that I really like, especially working downhill in the run game.

Robinson and Taylor have the makings of a strong bookend pairing, especially in the run game. They struggle in pass protection overall, but if the Jaguars can work downhill on the ground and punish people, that’s where these guys thrive.

I am a big believer in Cann inside, specifically as a run blocker. He’s nasty. He doesn’t have the lateral movement skills to mirror in pass protection though. Linder is a smart leader in the interior of the OL and Norwell is a longtime vet who consistently flies under the radar.

Speaking of the run game, James Robinson is an emerging star.

Undrafted out of Illinois State, Robinson won the starting job following the release of Leonard Fournette in training camp and has run away with it.

He has great contact balance, runs hard between the tackles and provides a physical identity to the Jaguars. He’s battling a shoulder injury right now, so I hope he’s healthy enough to play on Sunday because I love watching him get lost behind the big mammoths up front.

I really like him on stretch runs too, which could give the Steelers problems on Sunday. He has good vision on stretch runs, finds the right lane and bursts through.

He really seems to get better as the game wears on. He’s consistent, falls forward a ton and can wear defenses down.

On special teams, I really think this is one of the most underrated units in all of football. Jacksonville is so, so good on special teams, led by punter Logan Cooke, kicker Josh Lambo and Cole and rookie Chris Claybrooks in the return game.

Cooke had a whale of a game against the Texans and is averaging nearly 46 yards a punt this year. He’s dropped 45% of his punts (14 of 31) inside the opponent’s 20-yard-line.

Lambo was recently placed on IR, which is a shame considering against the Texans he set a franchise record with a 59-yard field goal. He has a massive leg. Chase McLaughlin will kick in his place. McLaughlin went 2-for-2 on the road in Green Bay last week in windy conditions.

McLaughlin has kicked for the Indianapolis Colts, San Francisco 49ers, Jaguars and Los Angeles Chargers in two years in the league.

In the return game, Claybrooks handles the kick return duties for the Jaguars. He’s flashed a potential throwback play in recent weeks and even executed a reverse on a return against the Packers last week. Keep an eye on that Sunday, since the Dallas Cowboys had success with a throwback.

Cole will return the punts, especially one week after returning one 91 yards for a score against the Green Bay Packers.

The Steelers have to make sure they don’t bunch up six defenders in the same lane like the Packers did a week ago.

Cole is an experienced punt returner who has good vision back there and good ball security. Jordan Berry will have to do a good job punting the football in Jacksonville on Sunday without outkicking his coverage.