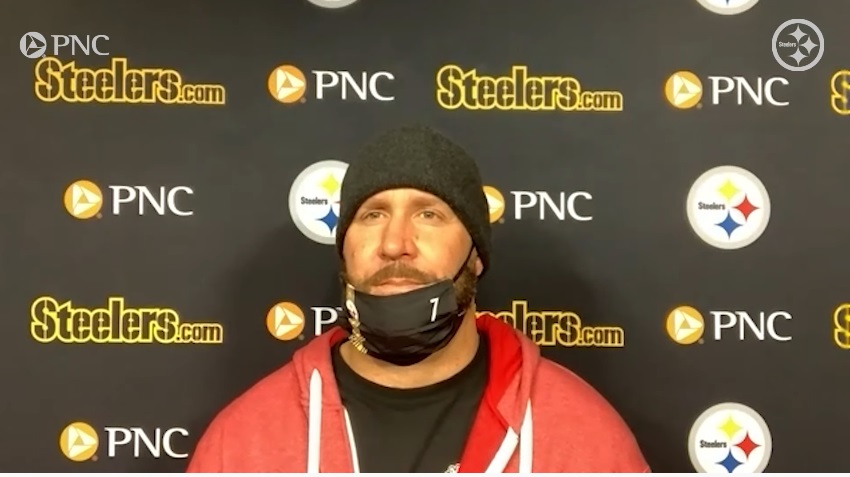 Playing without practicing isn’t brand new for Ben Roethlisberger, even if it’s far from ideal. But playing without even being in the building? Welcome to 2020.

Activated from the team’s COVID list and speaking with reporters Saturday morning, Roethlisberger described what the week’s been like for him.

“It’s way different,” he said via the team’s Youtube Channel. “There is something to be said to, and maybe I’m old school, about sitting in a meeting when you are installing stuff. When your coach is talking and your guys are in the same room and you can have dialogue and you can talk about little nuances.”

Forced to isolate at home, the best Roethlisberger could do was virtually sit-in on meetings and rewatch practice tape. Every little bit helps but it’s a drastic change he’s never dealt with before.

Those mental reps weren’t even as quality as they would’ve been on the field, even if Roethlisberger wasn’t practicing. He made sure to note the practice tape doesn’t have audio, making it hard to get a feel for exactly what’s going on at practice. Especially coming off the last two weeks where the offense has only reliably moved the ball by going tempo and Roethlisberger communicating with teammates at the line of scrimmage.

As anyone who’s ever sat in on an office Zoom meeting before, doing things virtually make it tough to gauge how much guys are actually paying attention. Given the heightened risk of COVID, the Steelers conducted their meetings online.

“In today’s society, guys have an iPad in front of them. But they might also have their phone next to them looking at things or watching TV, whatever it might be. I’m not saying that’s happening, but you just don’t know. When you are in a meeting room, you know everyone is dialed in, you know what is going on, so you can communicate a little bit easier in person.”

The Steelers hope to be dialed in against an underestimated Cincinnati Bengals team. In Week 8, the Bengals shocked the Titans in a convincing upset. While they may only be 2-5-1, almost all their games this season have been close and their offense is finding its groove over the past month, averaging 30 points per game.

Roethlisberger and the rest of the team will have to hope a week unlike any other ends with a weekend that looks much the same – another Steelers’ victory.